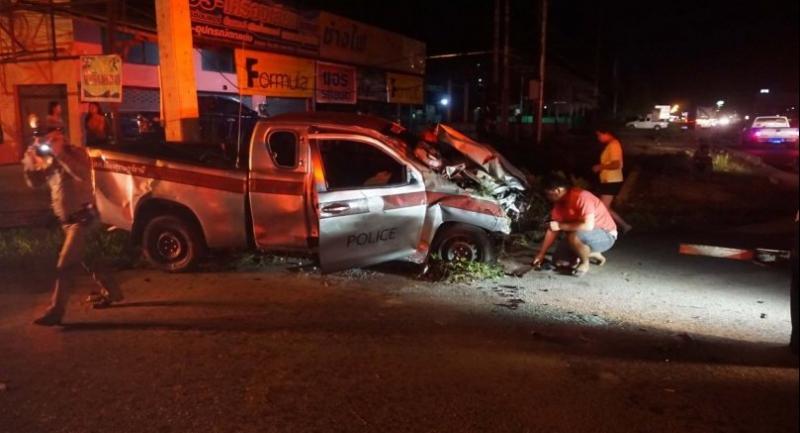 A 20-year-old Thai man, who had allegedly stolen a police pickup truck under the influence of meth-amphetamine from the Muang Surat Thai Police Station in Surat Thani province on Saturday night, was arrested two hours later in the early hours of Sunday after he crashed the vehicle into a power pole.

The accident happened in the Lang Suan district of Chumphon province. The man was slightly injured.

Deputy National Police spokesman Colonel Krissana Pattanacharoen said the suspect, whose name was not released, was accused of stealing the grey Toyota pickup with the police car licence number 17240 from the traffic police centre’s parking space. He allegedly broke the centre’s side window to take out the truck’s key at 11pm on Saturday. He then drove towards Lang Suan district of Chumphon.

At around 1am on Sunday, it was reported that the pickup the police were looking for had crashed into a power pole at the Pato intersection in Tambon Wang Takor. Officers rushed to the scene and arrested the young man who was trapped in the truck’s cabin. His urine test reportedly pointed to substance abuse. It was found that he had taken meth-amphetamine pills. The Lang Suan police have filed initial charges of reckless driving causing damage to another’s property and driving under the influence of illicit drugs against him. He would be presented before a court judge on May 27 to seek the first 12-day detention, Krissana said.

The Surat Thani police, meanwhile, is gathering evidence to also charge him with automobile theft at night-time by damaging property, he added.