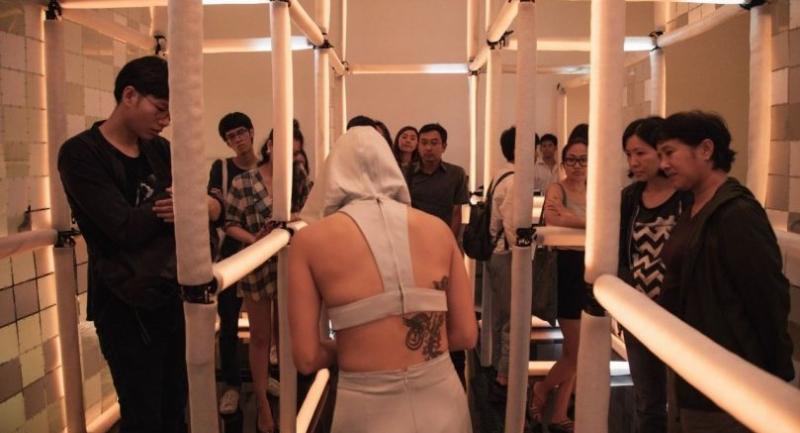 A new experiential performance delivers what it promised

B-FLOOR THEATRE is one of the most prolific and award-wining companies in Thailand. That’s partly down to the fact that, while most of their works are movement-based and politically charged, many members create their own works, frequently with other independent artists and performers, in different styles, on different subject matters and at different venues. For example, when you watch works by Teerawat “Ka-ge” Mulvilai and those by Dujdao “Dao” Vadhanapakorn, you wouldn’t think they belonged to the same company. I wish other companies were like this, which would mean fewer of them but more consistency in their works. Dao’s new experiential performance “Blissfully Blind” premiered at Bangkok City City Gallery last Thursday. Given the multidisciplinary nature of the work and the venue, an art gallery turned white box theatre, it was delightful to see not only die-hard fans of B-Floor but also visual arts audience among the crowd. That’s quite an achievement in a country where visual arts and performing arts are taught separately as if they were not related and their studios were not in the same building.

Before the start of the performance, we were told in Thai and English, that we could experience this by sitting down, on what we discovered later were lightboxes-cum-benches, standing, or walking around the space. We were not allowed, though, to touch the performers or the installations.

The massive light installation designed by Mont Watanasiriroch and his Zeight team, comprising hundreds of lightboxes and through which the performers as well as the audience could walk, was in the middle of the gallery. Different installations filled the other two parts of remaining space. In one part, close to the door were Navinda Pachimsawat and Phuttiporn Suttimanad; in the other, Amornsri Pattanasitdanggul and Vidura Amranand. With different and corresponding movements, the four switched places from time to time, while Dao remained in the centre structure, occasionally visited by one of them when she needed emotional healing.

While Dao and Democrazy Theatre Studio’s Thanapol Virulhakul were credited as choreographers, it was clear from many scenes that the four other performers also had input. For example, the scene in which Phuttiporn, a recent graduate in dance, was practising classical ballet turns, watched by Navinda, a dance teacher, reflected how the arts are being taught in this country – blindly and obediently.

I chose to stand in the centre structure throughout the one-hour performance, hoping that I would get to see all the stage action. Unfortunately I could not. In addition, the sound designed by Kamonpat Pimsarn for the two parts of the room was frequently different. Again, like in life, I could not hear everything.

In this day and age when we’re rebuilding our democracy but the media is “bound” by government to print and to broadcast only what’s “positive” and “appropriate”, we rely more than ever on what’s delivered directly to us on social media. We tend to believe that what we get through these new channels, uncensored, is truth and fact. Often though, we come to realise that we don’t actually see or hear everything, that there’s always a limit.

And that’s why we need a contemporary performance like “Blissfully Blind” to remind us of this.

- The lighting installation is open for public viewing–free of charge–every Saturday and Sunday from 1-5pm.