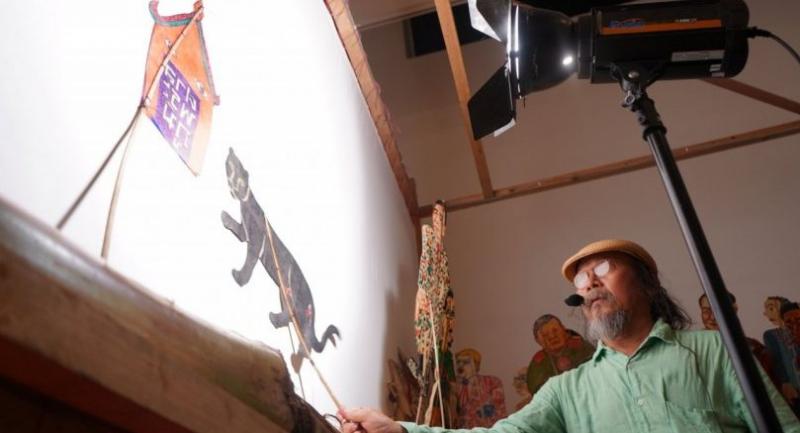 Vasan Sitthiket manipulates a puppet in a satirical take on the tycoon who alleged killed a black leopard in a wildlife sanctuary. /Courtesy of Chatip Suwanthong

IT SEEMS ironic that Vasan Sitthiket has never held a large-scale exhibition at the Bangkok Art and Culture Centre after all the effort he put into lobbying the government to build the nation’s first international-standard art centre for more than a decade.

One of Thailand’s most outspoken artists, Vasan, 61, had to wait for another 10 years to portray the darker side of society through his sarcastic, satirical and often obscene works. It’s the first of a series of BACC exhibitions devoted to artists in their mid-life after a roll call of exhibitions by masters Chalood Nimsamer, Ithipol Thangchalok and Pratuang Emcharoen.

Continuing until May 27, his retrospective “I Am You” is one of the most controversial shows the art centre has ever held. The artist is known for painting himself in the nude as well as the act of sexual intercourse to mock political and social ills that vary from corruption, dictatorship and sinful monks to the destruction of forests and the construction of power plants. Vasan poses in the front of canvas banners he invited people to paint 15 years ago when he was lobbing the government to build the Bangkok Art and Culture Centre.

“I normally use my self-portrait because I’m also a victim. Nudity in my work signifies that everyone is equal. Being stark naked means no one knows who holds what position. The sexual positions symbolises greed and the wickedness of power while rape is the most violent action that we can inflict on another,” says Vasan, who is one of the country’s most active and socially engaged artists.

Adulaya Hoontrakul, a co-curator, adds that “I Am You” revisits the phrase Vasan used in his 1993 exhibition in which he put his own face on images of the bodies of victims of crime to point out that we all share the responsibility for what happens in our world.

The exhibition tracks his works from 1975 to the present and includes more than 100 works, some of them from Vasan’s own collection and others on loan from private collectors. The works are not arranged according to a timeline, but divided into themes. The artist always uses his self-portrait to signify that he too is a victim of social ills.

“It’s a record of my commentary on political and social situations in different periods. As I look back over what I have created during the past four decades, I find that nothing has changed for the better. We’re still caught in a loop of the same problems. The country is either run by greedy capitalists or the military and the people just think about how to get by day by day and try their luck with the lottery. Intellectuals have no room to speak or have opted to keep quiet during the past decade,” he says.

One wall is covered with his contributions to the campaign 15 years ago when he invited people to draw or write messages on 4,000 canvases to fight against the then Bangkok governor Samak Sundaravej’s plan to turn the land on which BACC stands into a mall and a car park. The straw in his “I Love Thai Culture” work symbolises poor farmers and his recent series “Preta” compares greedy capitalists and powermad authorities as hungry ghosts.

The most recent work on view is a series of five figurative paintings in red, white and blue and arranged to resemble the stripes of country’s national flag. Titled “Preta”, they compares greedy capitalists and power-mad authorities as hungry ghosts due to their support for constructing dams and coal-fired power plants. Bold colour and simple lines are used to portrayed the horror of modern sins that can only be redeemed in hell.

“I prefer to speak directly and concisely, so my works express my feelings very directly. You love or hate it,” he continues. “Though there’s very little hope of creating a better society, I can’t accept the dark and mad powers and will wait to see how these people will crumble.” Vasan Sitthiket manipulates a puppet in a satirical take on the tycoon who alleged killed a black leopard in a wildlife sanctuary. /Courtesy of Chatip Suwanthong

Vasan has conveyed his thoughts in several mediums – performance, video, poetry, music and political campaigns among them – and for the last 10 years has turned to shadow puppetry to get his critical comments across.

Narrated in a hilarious conversation with plenty of improvisation, he mocked Premchai for the much-publicised killing of a black leopard found at his campsite in a wildlife sanctuary, and Prawit regarding his alleged possession of multiple luxury watches. The promotional posters for his Artist Party set up for the 2005 general election.

Political and economic upheavals are revisited in satirical works such as his politically themed, conceptual art of the Artist Party, set up during the 2005 general election, showing posters and leaflets bearing a facetious Vasan wearing suit and tie.

His party came with the slogan “for no ruler” – a putdown of Thai Rak Thai Party’s populist “for the people” – and publicised its policy, which included seizing the assets of corrupt politicians and self-government. “Death for Democracy” depicts the Black May uprising against military dictatorship in 1992.

Also on display are several paintings from his controversial 1997 series “Inferno” that evoked misery in hell for, among others, a sinful monk giving out lottery numbers, a gangster and a weapon merchant who profited from suffering and devastation, and a doctor who took advantage of the poor.

In 1992, in the wake of the Black May uprising against military dictatorship, he painted “Lord Buddha visiting Thailand”, juxtaposing an image of the Buddha with scenes of massacre and rape and earning him condemnation from many Buddhist institutions. To remind people that we all come from the womb, his 2001 series “We Come from the Same Way” portrays artists, philosophers, leaders and activists such as his personal influences Van Gogh and Chitr Bumisak, and a work showing him emerging from the vagina.

Vasan has adopted Facebook as another platform for activism by posting his comments, short poems and paintings on his wall. Some of his commentary on social media appears in this exhibition. “It’s a new and effective tool to communicate with the public,” he says. “I’m interested in the graffiti of a black leopard’s head accompanied by the symbol of a mute button on a wall on Sukhumvit Road that was mysterious removed. It stirred people to express their grief and anger on social network platforms. Facebook, Twitter and Instagram users have written about the issue using both prose and poetry, and graffiti of the big cat has been reproduced in many public areas around the country.”

A campaign calling for the prosecution of the tycoon Premchai over his alleged killing of a black leopard has thus expanded into essays, poems, paintings and street art.

“It shows the power of the social networks,” Vasan continues. “This might wake people up to fight against injustice.”

HEAR VASAN AS HE GROWLS

“I Am You” continues until May 27 at the main gallery on the eighth floor of Bangkok Art and Culture Centre.

The centre is located at Pathumwan Intersection, opposite MBK mall (BTS: National Stadium).

It’s open daily except Monday from 10am to 9pm.