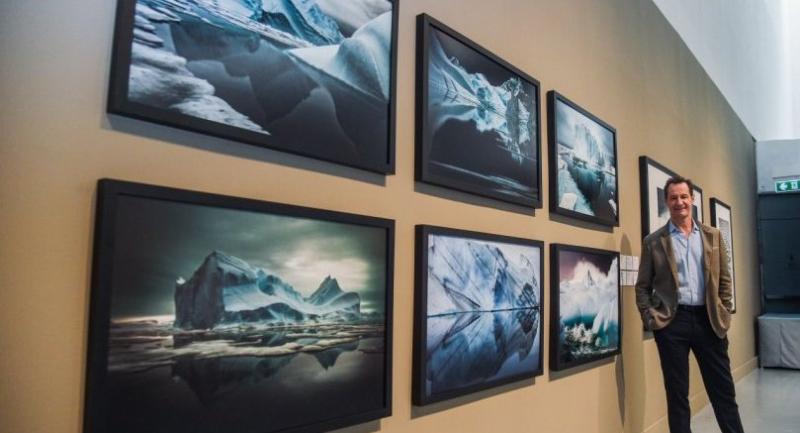 Sebastian Copeland, a polar explorer as well as an award-winning photographer, has travelled 8,000 kilometres across the Arctic, Antarctic and Greenland on foot and has 15 dramatic images in the show. Nation/Chalinee Thirasupa

A lone polar bear scrabbles across a melting iceberg. Beijing lovers wear masks to shield their lungs from polluted air. A tiny fish is trapped inside a floating plastic bag off Thailand’s Koh Phi Phi Leh. A Mali rancher and his son stand sternly over a desiccated cow carcass in a drought-stricken landscape.

Yes, the message is about the environment – specifically climate change – and it’s a powerful one. James Balog reflects on the drama of the melting ice sheet in Greenland in 2009. Photo courtesy of James Balog

It’s contained in the touring photo exhibition “Beyond the Air We Breathe: Addressing Climate Change”, on view at the Bangkok Art and Culture Centre until September 2.

In all there are 140 stunning images by more than 60 photographers in the show assembled by Hossein Farmani and Susan Baraz for the United Nations Climate Change Conference held in Paris in 2015.

The collection had been seen by more than a million people, in Italy, France, the United States and Mexico, before coming to Bangkok.

It is, says Farmani, about “finding beauty in disaster, beauty at risk”.

“These major photographers who have committed their time and passion to documenting the changes in climate allow us to be a witness to the earth’s transformation. They are at the forefront of bringing awareness to us all.”

The Royal Photographic Society of Thailand and the Lucie Foundation are co-hosting the exhibition, which spotlights works by four influential photographers in particular – Steve McCurry, James Nachtwey, Sebastian Copeland and Tom Jacobi. Copeland, a polar explorer as well as an award-winning photographer, has travelled 8,000 kilometres across the Arctic, Antarctic and Greenland on foot and has 15 dramatic images in the show.

“The Arctic Sea is now in danger,” he told The Nation. “Expeditions to the North Pole are much more difficult now than they used to be because the ice has been rapidly melting for decades.”

British photojournalist Sean Gallagher is based in China and calls Beijing “the Mask City”, saying most of its residents wear filter-masks because of the foul air. His photo of the young couple in masks might have been sweetly romantic anywhere else – they’re holding hands, after all – but their hearts are at risk. The situation evidently isn’t much better in Shanghai and Shijiazhuang, where Benedikt Partenheimer captured scenes of ghastly pollution.

Bangkok has nothing to brag about, of course, with health-threatening PM2.5 pollutant particles regularly massing to dangerous levels. Silvia Gaiani, an academic researcher for the United Nations’ Food and Agriculture Organisation, writes in the exhibition catalogue that “many parts” of Thailand are choking.

“Lack of regulation and frequent dumping have led to a rapidly worsening situation. The World Bank estimates that there have been nearly 20,000 air-pollution-related deaths in Thailand in the past 20 years. The most vulnerable to the air pollution are those with heart and respiratory diseases.” It’s no prettier underwater. Nat Sumontemee, who has specialised in marine photography for three decades, travelling the globe, has witnessed the effects of climate change first-hand.

He’s showing fabulous shots of a whale shark in Maldives, a humpback whale calf off Tonga, sea cows in Florida and dying coral reef in Fiji, as well as a mangrove forest in Krabi.

But that shot of the little fish trapped in a floating plastic bag off Phi Phi is the most thought provoking.

“Unfortunately, every place I’ve returned to, the natural underwater life has deteriorated,” he said, putting much of the blame on human activity. “Climate change is real and it has affected all life on this earth more than we could imagine.” The Cultural Centre, doing its bit to save the planet, won’t tolerate plastic bags anymore.

“All of the shops here have stopped using plastic bags,” said its director, Pawit Mahasarinand. “This is another example of how we’re more than an art museum or culture centre – this is a socio-cultural centre.”

The next step is a collaboration with non-profit environment group Magic Eyes to reduce the centre’s carbon footprint.

“Magic Eyes is helping our building-maintenance team with waste-management training and raising awareness about environmental issues,” said Pawit. “Together we’ll be holding climate-change-related activities every Sunday in July.

“And, starting on July 29, our 10th anniversary, we’ll bar all foam containers. People who bring reusable cups and containers to our cafes and restaurants will also get a discount on their drinks and meals.”

The centre and Chulalongkorn University’s Faculty of Education are meanwhile planning activities around art and climate change for more than 1,000 students at a BMA-run primary school in August. Copeland presents his endearing shot of a polar bear near the North Pole.  Nation/Chalinee Thirasupa

All eyes on the drama

- The exhibition “Beyond the Air We Breathe: Addressing Climate Change” continues through September 2 at the Bangkok Art and Culture Centre.

- Sebastien Copeland’s documentary film “Into the Cold: A Journey of the Soul” will be screened on July 10 at 7pm in the auditorium, free admission.

- Tom Jacobi will talk about his work on August 23 in the auditorium. Admission is Bt200 for members of the Royal Photographic Society of Thailand and students and Bt500 for everyone else.