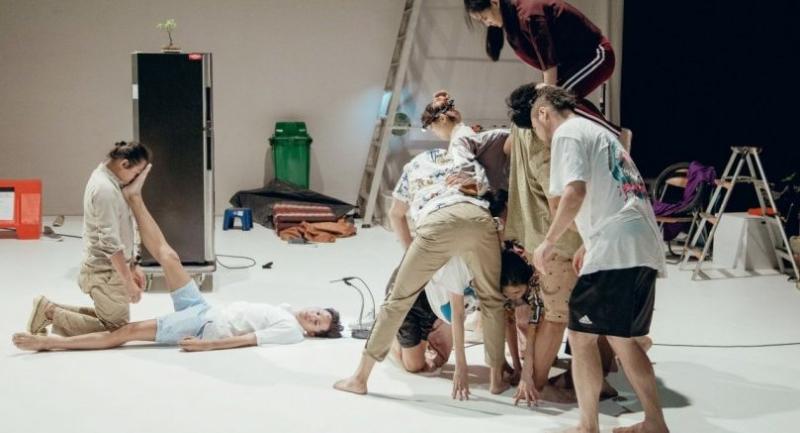 Toshiki Okada’s stage adaptation of Uthis Haemamool’s novel is a prime example of intercultural performance that goes beyond Japan and Thailand./Photo by Sopanat Somkhanngoen

The year's most anticipated drama production is a coup-de-theatre

Last year, citizens of Japan and Thailand were celebrating the 130th anniversary of our diplomatic relations and, thanks to the Wa Project of the Japan Foundation’s Asia Centre, Thai theatregoers were given a special treat. Globally revered Japanese playwright and director Oriza Hirata staged “Bangkok Notes”, his Thai adaptation of his masterpiece “Tokyo Notes” as the curtain raiser of Bangkok Theatre Festival (BTF) at Chulalongkorn University’s Sodsai Pantoomkomol Centre for Dramatic Arts, with an all-Thai cast and a Japanese and Thai production crew. It later picked up IATC Thailand’s top prize.

This year, despite no special reason to celebrate, the treat is even more exciting. Thanks again to the Wa Project and to the additional support of Tokyo Metropolitan Foundation for History and Culture and Saison Foundation, the world premiere of “Pratthana – A Portrait of Possession”, internationally renowned Japanese director Toshiki Okada’s adaptation of Thai SEA Write laureate Uthis Haemamool’s 2017 novel “Rang Khong Pratthana” (“Silhouette of Desire”), was at the same venue last Wednesday, similarly with an all-Thai cast and mixed crew members.

In case our Ministry of Culture and other foreign cultural organisations are interested in following this effective cultural exchange model, it should be noted that both feats are not a one-off, but sustainable projects. Our first exposure to Hirata was his workshop in 2004, and before “Bangkok Notes”, he’d already staged three works here – one with Thai actors. For Okada, that was his globetrotting production of “Five Days in March” with his company chelfitsch at Patravadi Theatre in 2010, when he also conducted a workshop. While developing the “Pratthana” project, he gave a few talks with Uthis and staged “Super Premium Soft Double Vanilla Rich” here. His award-winning collection of short novels “The End of the Special Time We Were Allowed” has also been translated into Thai. Spanning the period from 1992 to 2016 and covering three coups d’etat, the play follows a young Thai artist from his adolescent years upcountry, to his tertiary education at a prominent arts university in Bangkok, his professional practices, as well as his sexual relationships, both heterosexual and homosexual. The audience found out, for example, that he was named “Khao Sing” (“being possessed”) because he fainted when he was taken into a dark room by his senior students during the new students’ orientation rite. It’s evident that the Japanese director has much respect for his Thai collaborator as the former retains the latter’s words in the play, and employs different staging techniques to interpret them. Indeed, this play sounded more like an edited version than an adaptation of the novel. Okada deftly had each and every member of his cast members take turns performing the protagonist, age-and-gender-blind. Like the original novel itself, the play masterfully juxtaposes, and connects, the individual and the mass, the private and the public, arts and everyday life.

It’s noteworthy that while Thai audience members were given only a programme leaflet, the non-Thai speaking ones were also provided with seven pages of notes on significant names and events mentioned in the play, like Palang Dharma Party and October 13, 2016. This is in addition to the novel translator Sho Fukutomi’s notes on the Thai word “Pratthana” – how its connotation is not only sexual and how it’s linked to the nation-body of Thailand – and it reads like one dramaturg’s notes. As most plays are created for local audiences first and foremost, this extra information is indeed necessary for this specific political example to be universally understood.

Those who frequent contemporary Thai theatre productions know that “Pratthana’s” 11-member cast is a dream ensemble, comprising not only two Silpathorn artists – B-Floor’s co-artistic directors Jarunun Phantachat and Teerawat Mulvilai – but also former recipients of IATC Thailand’s annual acting awards—Sasapin Siriwanij, Thongchai Pimapunsri, Witwisit Hiranyawongkul and Teerawat as well – in addition to other seasoned stage actors. While their force as an ensemble was never in doubt, their capability for handling monologues as the protagonist Khao Sing varied from one to another, and the dialogue parts, no matter how few, seemed to flow more smoothly. Besides, Okada’s works are known and lauded for his performers’ physical movements, which are so dance-like that many of his works have been presented at dance festivals. That could be said for some members of this cast, but not all, as others’ looked more like generic hand gestures accompanying spoken words, and most hadn’t relaxed their lower parts of the body the way chelfitsch performers do. Like Khao Sing’s life and Thai politics, scenographer Yuya Tsukahara’s design of white floor and white backdrop was never empty nor dull. It was always filled with movable set props, sound equipment, video projection of close-ups of stage actions and still image projection of Uthis’s paintings – the latter frequently upstaged by others – as well as English and Japanese surtitles. His design also exposed the lighting, sound and video crew at work on stage left and they blended in with the ensemble. And even though politics played a major role in the play, we didn’t get to watch video footage from our infamous political turmoil except for half a second of the Pulitzer prize-winning photo from October 1973. And in this visually dense production, that was indeed smart as spoken words effectively conveyed political messages.

Lighting designer Pornpan Arataveerasid, accordingly, added a more organic look to the black box theatre and left the house lights on throughout the first half of the play, drawing the audience closer to the stage actions.

It was reported that the opening night was full to the capacity and foreign producers and critics, as well as Witwisit’s die-hard Chinese fans, also flew in. The same could not be said for the subsequent five performances, and the play’s running time and subject matter, more serious than our cup of Thai milk tea, might have turned some audiences away; it was only half full on Thursday when I went. And more variation of pace would have made it feel shorter.

Before the performance, a staff member announced that the play had two parts, 90 minutes each plus one 20-minute intermission. That’s only one-third truth: the total time spent there was in fact three hours and 50 minutes, and a few audience members left at the intermission, saying politely, “The air-conditioning was too cold”. Maybe that staff member was portraying either a Thai politician or military officer who just wanted to comfort us that we should always stay calm and keep smiling while we wait for the arrival of democracy in Thailand, no matter when that is.

ON TO THE CITY OF LIGHTS