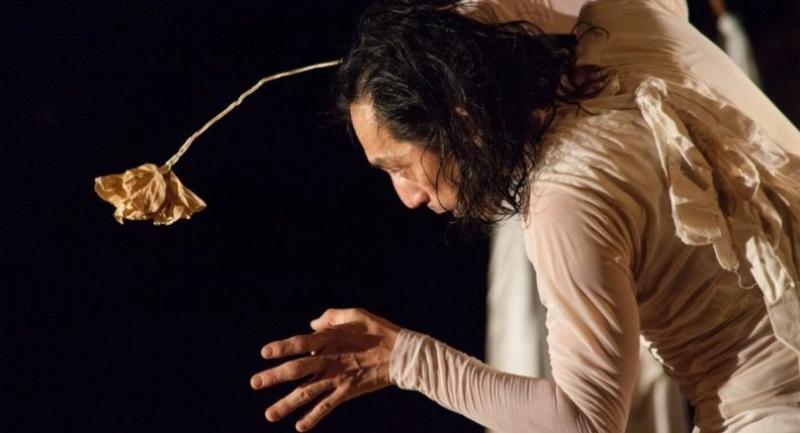 IN POST-WAR JAPAN, Kazuo Ohno and Tatsumi Hijikata not only pioneered butoh but also put it firmly on the world map of arts as a major contemporary genre. After 10-years of semi-retirement from the stage, Ohno, then 71, came back with a seminal work “Admiring La Argentina”, which toured around the world and delighted audiences everywhere. He continued to perform “a dance of soul”, despite problems with his eyes until his death in 2010 at the age of 103. Hikikata described Ohno as “a dancer of deadly poison, capable of striking with just a spoonful.” Thanks to Japan Foundation Bangkok, who more than two decades ago invited butoh master Katsura Kan to teach at a few universities and work with other professional dance and theatre companies, butoh has had significant influence on the development of contemporary Thai dance and theatre. Proof of this can be found in the annual International Butoh Festival Thailand, upcoming in December, which is now in its 13th year.

Performance artist Takao Kawaguchi has never seen Ohno perform live. In last year’s interview with Japan Times, he said that in the late 2000s while attending a butoh exhibition at a museum, he was so mesmerised by Ohno’s photo that he bought a poster to put on his wall. Several years later, the idea to create this performance took shape along with the realisation “that I wanted to work with his movements to understand butoh on a deeper level and not just as a concept or an idea.” During the same interview, he said: “My approach was to copy as much as I could see on a video,” adding, “Ohno is improvising, of course, so to copy or repeat anybody’s improvisation, even my own, is very difficult. But I tried hard to be faithful to the video and to not intervene with my own interpretation – just create a representation of the video movements themselves.”

Yoshito Ohno, the late master’s son, not only gave him permission, but also loaned his father’s costumes and gave him all the necessary archive materials. Yoshito’s support has continued from the 2013 premiere until today. Reaction wasn’t always positive though. Kawaguchi, whose works often challenge artistic genre boundaries, noted some disapproval, saying “Others were reluctant, feeling perhaps a sense of taboo towards copying the master. The butoh heritage is very strong, and I am coming from outside, so it did provoke some strong feelings.”

Since the premiere in Japan five years ago, “About Kazuo Ohno: Reliving the Butoh Diva’s Masterpieces” has been to many important festivals and theatres around the world, receiving favourable reviews from those who have and have not seen Ohno on stage. At the Japan Society in New York two years ago, the performance, later nominated for the Bessie Award, was called “a bold copycat tribute” by a New York Times critic who elaborated: “In ‘The Embryo’s Dream,’ from ‘My Mother,’ he staggered across the stage, an androgynous figure with a parched rose in one hand (Ohno was known for gender-bending), his body as brittle but tenacious as its petals. Passages from ‘La Argentina,’ a tribute to the flamenco star Antonia Merce, were melancholic, flirtatious and extravagant. Onstage costume changes – into a liturgical robe and cap for a section of ‘Dead Sea,’ or white face paint and red lips for ‘La Argentina’ – underscored the premise of becoming someone else.”

That same year, the LA Times critic described Kawaguchi’s accomplishment, writing: “He is lean and muscular, and every nerve ending and fibre works independently as he transforms him before our eyes into the unnatural poses, awkward gaits and slow, controlled movements that Ohno originally created. It is the art of self-sculpting.” “About Kazuo Ohno” was seen at Theatre de la Ville, as part of “Festival d’automne a Paris” earlier this month. Pichet Klunchun, artistic director of his namesake company, which is in residence at Chang Theatre, hopes many butoh enthusiasts will come to watch this work. “Chang Theatre presents dance works and undoubtedly ‘About Kazuo Ohno’ is one of the most significant dance works in the world now,” he says.

“The work is a record of the artistic journey of a dance master who devoted his whole life to his art, until his last breath. And that’s why, for me, Kazuo Ohno still lives, on stage. In Thailand, there’s no equivalent to him and I think his legacy solidly proves that you can still be a professional dancer until you’re 80 or 90 years old, and not have to stop at 30 or 40 like many people think,” the internationally acclaimed dancer and choreographer adds.

“Also, while many Thai dance and theatre artists know butoh, very few of us really know who created it and how. And so this is an important opportunity to get to know the master and the original.”

“About Kazuo Ohno: Reliving the Butoh Diva’s Masterpieces” is on Friday and Saturday at 7.30pm, and on Sunday at 2pm.

Find out more at, www.ChangTheatre.com.

Takao Kawaguchi’s Body Sculpture Workshop: Experience the process of making “About Kazuo Ohno” is at the same venue on Saturday, 1-3pm. Free admission. Recommended for those with some basic dance background.

For more on the late Butoh master, www.KazuoOhnoDanceStudio.com/english/kazuo