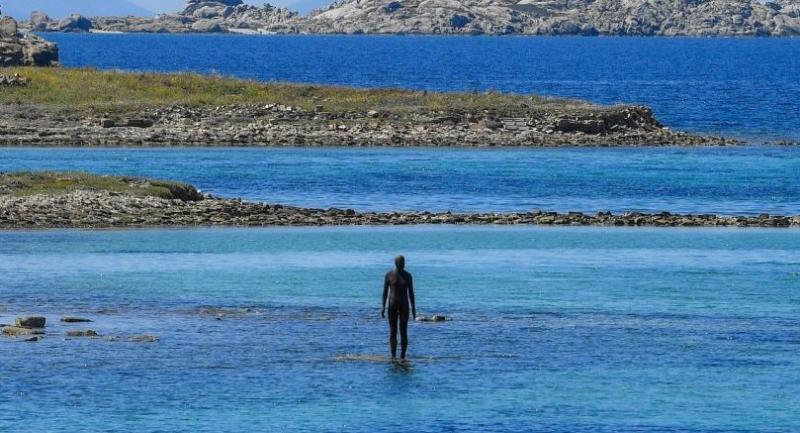 The statue “6 times left” by Gormley stands in the sea at the entrance of the port of the island of Delos in Greece./AFP

A STONE’S throw from the Greek island of Mykonos lies Delos, an uninhabited islet a world away from its neighbour’s glamorous nightlife.

It is there, on an island best known for its archaeological treasures, that British contemporary artist Antony Gormley is showing 29 of his sculptures.

Gormley is perhaps best known for his gigantic Angel of the |North, a 20-metre high steel |work that since 1998 has been |an unmissable landmark in its home at Gateshead, northern England. A visitor sits next to the statue “Water” by renowned British artist Antony Gormley, part of his exhibition “Sight” at the archaeological site of the island of Delos, a Unesco World Heritage Site./AFP

But this new exhibition – including five works specially created for the event – sets his contemporary work among the remains of ancient Greece.

“It’s an extraordinary responsibility,” Gormley told journalists at the opening.

“It’s an amazing privilege to occupy a site that hasn’t been occupied by a living artist for more than 2,000 years – that’s a bit of a challenge isn’t it?”

The archaeological finds on Delos date back as far as the 3rd millennium BC up to the Hellenic era of classical Greece.

Its Unesco World Heritage listing describes it as an “exceptionally extensive and rich” site, reflecting its past as a cosmopolitan port.

The exhibition is intended as a dialogue between contemporary civilisation and the past, says Elina Kountouri, who heads up Neon, the non-profit that organised the show along with London’s Whitechapel Gallery. The statue “6 times left” by Gormley stands in the sea at the entrance of the port of the island of Delos in Greece./AFP

A mark of the respect accorded to the site is that none of Gormley’s sculptures have been placed inside the ruins of the ancient sanctuaries of the Greek gods Apollo and Artemis.

According to Greek myth, Delos is where the two gods – brother and sister – were born.

Gormley’s silhouettes in steel have been installed on different parts of the island, which covers only 3.5 square kilometres.

Some can be seen as you approach the island by boat from Mykonos, such as the figure of man standing at the northern extremity of Delos.

Another stands in the water at the entry to the island’s port, a third at the entrance to an ancient site. For Gormley, Delos is “an extraordinary place to think about the human project...”.

And of his exhibition, he says: “For me this is a conversation about time. I think sculpture deals with time in an era (when) nobody has time. “For me, Delos as an island has this light and atmosphere and feeling that it timeless – or outside the industrial time we are living.”

But even if ancient gods are gone, we worship at other altars today, he adds. “I don’t live in a world that is commanded or guided by gods,” he says. “I live in a world that seems to be ruled by money and I’m trying both to resist that and recognise it.

“It’s been for me a real learning curve: how to listen to the marks that are already here – how to respond to the geology.”

Gormley’s exhibition, “Sight”, runs on the island until October 30.