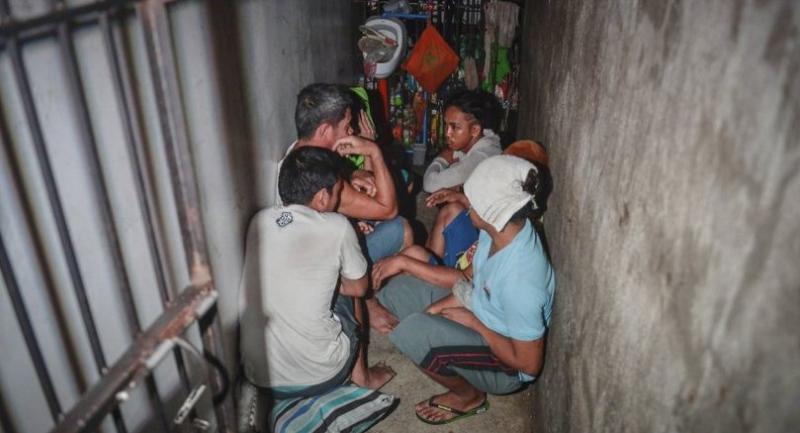 Filipino detainees crouch on the floor during a raid by human rights workers at a police station in Manila, Philippines, on April 27.//EPA

Manila - A dozen people have been found stuffed inside a closetsized cell hidden behind a book shelf in a Philippine police station, triggering further alarm about abuse under President Rodrigo Duterte's deadly war on drugs.

Members of the government's human rights commission, accompanied by journalists, found the men and women in a surprise visit to the station in the heart of Manila's slum area on Thursday evening.

Stunned detainees came stumbling out of the room, some begging for water while others, in tears, pleaded with the rights workers not to abandon them.

The detainees said they had been held for about a week after being arrested on allegations of drug use or trafficking and that police were demanding hefty payments in exchange for their freedom.

"They were picked up on the pretext of drugs but they had not filed any charges against them," Gilbert Boisner, Manila director for the rights commission who led the inspection, told AFP on Friday.

The station commander, Superintendent Robert Domingo, told reporters at the scene the detainees were arrested only the previous night and police were preparing to file charges against them.

"He (Domingo) will undergo an administrative case. If evidence warrants, a criminal case will also be filed against him and the persons involved," Carlos said in a statement to AFP.

Human Rights Watch said the incident was another sign of widespread rights abuse under Duterte's war on drugs, which has seen thousands of drug suspects killed either by policemen or mysterious vigilantes.

"The discovery of the secret jail is just the latest sign of how police are exploiting Duterte's abusive antidrug campaign for personal gain," a Human Rights Watch statement said.

Duterte briefly suspended all police from the crackdown in January after an official investigation found drug officers kidnapped a South Korean businessman and murdered him as part of an extortion scam.

Duterte described the police force then as "corrupt to the core" and vowed it would not be allowed to prosecute the drug war its ranks had been "cleansed".

Duterte redeployed police onto the drug war about a month later, without major reforms.

A Philippine lawyer on Monday filed a complaint at International Criminal Court accusing Duterte of mass murder, alleging his war on drugs had led to about 8,000 deaths.

The incident occurred as Duterte began welcoming Southeast Asian leaders for a summit in Manila.//AFP