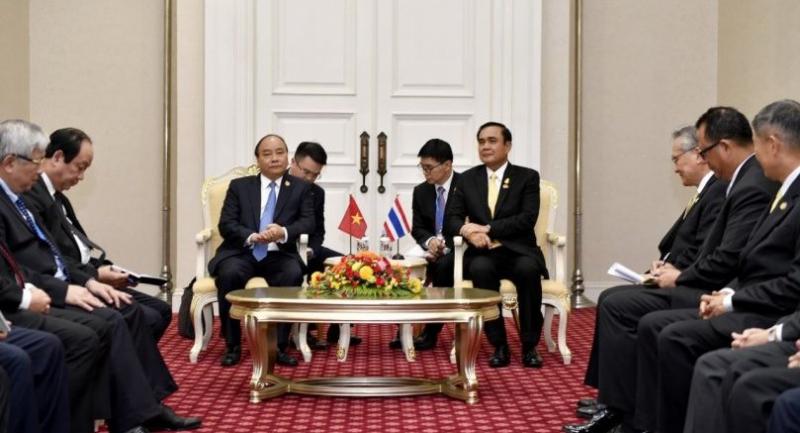 Phuc was upbeat after attending the second Lancang-Mekong Cooperation (LMC) summit in Phnom Penh on Wednesday. There he had a chat with his Thai counterpart PM General Prayut Chan-o-cha on the sidelines of the LMC summit about preparations for the GMS summit. All six leaders of the riparian Mekong states have signalled their attendance to talk about infrastructure development around one of the world’s great rivers just two months after similar talks in Phnom Penh.

Prayut said Thailand was ready to work with Vietnam in organising the GMS summit. Phuc invited all leaders he met on the sideline of LMC, including Chinese premier Li Keqiang, to attend the Hanoi summit on March 29-31. Phuc hailed Thailand’s contributions to promoting cooperation in the Mekong sub-region and in the LMC framework, and asked Thailand to play a role in ensuring water resource security and sustainable use of Mekong water resources, according to the Vietnam News Agency.

Stressing the important principles of cooperation for the socio-economic development of member states as well as regional peace, stability and prosperity, the Vietnamese leader underlined stronger collaboration in effective and sustainable management and use of Mekong water resources.

The use of water resources in the Mekong River is a common concern of countries in the basin as upstream development projects have had severe impact on the environment and livelihoods along the river. Many hydropower dams in the tributaries and mainstream of the Southeast Asia’s longest river cause unnatural fluctuations of water flow.

Overriding priorities should be given to hydro-meteorological statistics and information sharing, cooperation in response to droughts and floods and joint scientific research to construct reservoirs along the Mekong River, Phuc told his colleagues at the LMC summit.

He added that cooperation was also vital for infrastructure development that facilitates flows of commodities, services and capital, and local people’s travel.

While the LMC has identified a wide range of cooperation in dimensions of politics, economics, and social needs in terms of the environment and water-resource management, the scheme has no clear regulation or protocol for water utilisation.

Only four countries in the lower part of the Mekong – Thailand, Laos, Cambodia and Vietnam – signed the 1995 Mekong Agreement, the pact for river regulation and establishment of the Mekong River Commission.

As the country at the end of the river, Vietnam has suffered from a reduction in the volume and quality of fresh water, in parallel with salinity intrusion and drought in the Mekong Delta.

China has eight dams in the upstream of the Mekong, the stretch it calls Lancang. The Asian power said its reservoir are indeed useful for regulating the water flow, and point to their release of water from the Jinghong reservoir to help relieve drought as Hanoi requested in 2016.

Conservationists expressed their disappointment as the six leaders at the Phnom Penh summit did not address transboundary environmental impacts of development projects in the region. At the LMC summit, the six leaders reaffirmed the goal of building a Mekong-Lancang region of peace, stability, sustainable development and prosperity.