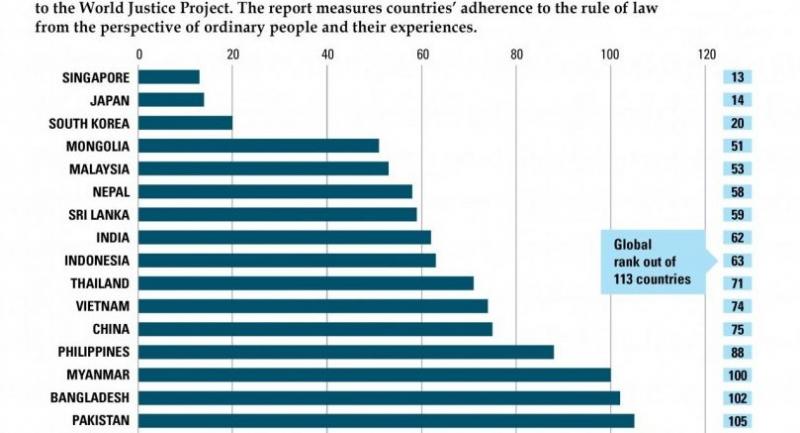 Singapore has the most accountable system in Asia followed by Japan, according to the recently released World Justice Project. Out of the 113 countries in the index, Philippines, Myanmar, Bangladesh, Pakistan and Cambodia rank lowest.

The WJP Rule of Law Index measures countries’ adherence to the rule of law from the perspective of ordinary people and their experiences. It measures rule of law adherence in 113 countries and jurisdictions worldwide based on more than 110,000 household and 3,000 expert surveys.  The report measures the perception of people about the rule of law with reference to eight factors; constraints on government powers, absence of corruption, open government, fundamental rights, order and security, regulatory enforcement, civil justice, and criminal justice.

Singapore is ranked 13 globally and is at the top in Asia for how rule of law is experienced by common people in their day to day lives.  It is closely followed by Japan which is ranked 14 out of 113 countries. South Korea is ranked 20th globally and is the third ranked state in Asia in terms of how people experience protection of their rights in their country.

Mongolia has been building a steady democracy over the last two decades and is ranked 51 out of 113 countries.  It is ahead of many Asian countries. Malaysia and Nepal are ranked 53 and 58 respectively. Nepal is closely followed by Sri Lanka. Sri Lanka is the biggest improver with moving up nine positions since the last index was released.

With the rise of religious right in India the country has seen a steady decline in rule of law. It is ranked 62. Indonesia ranked 63 has also been experiencing a rise in religious tensions alongside cases of corruption against the political leadership.

Under military rule Thailand is ranked 71 out of 113 countries, followed by Vietnam and China ranked 74 and 75 respectively.

The Philippines is among the lesser ranked countries at 88, followed by Myanmar at 100. Bangladesh and Pakistan are very low in the list of 113 countries.

Cambodia is the lowest ranked country at 112 out of 113 countries.  As the ranking is the reflection of peoples’ perception, the Cambodians’ perception of the state of law in their country is the worst amongst all other regional countries.