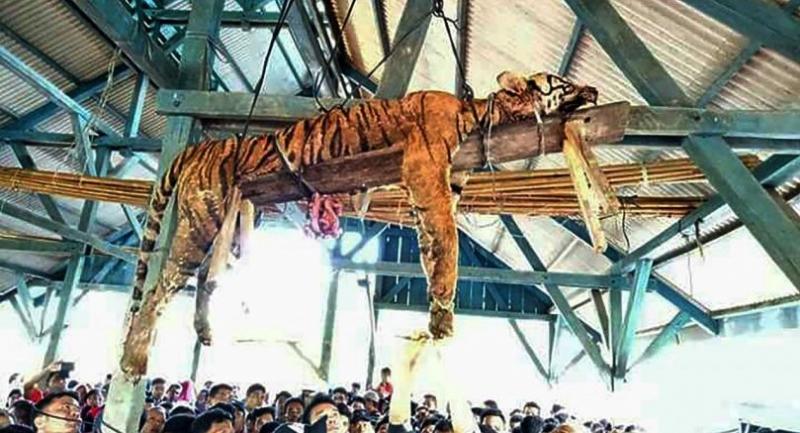 This picture taken on March 4, 2018 shows the carcass of a Sumatran tiger hung from a ceiling as villagers gather underneath at Hatupangan village in North Sumatra.// AFP PHOTO

Villagers in a remote Indonesian community disemboweled a critically endangered Sumatran tiger and then hung the big cat from a ceiling after it attacked a pair of locals, a conservation official said Monday.

Human-animal conflicts are rampant in the vast Southeast Asian archipelago, especially in areas where the clearing of rainforest to make way for palm oil plantations is destroying animals' habitats and bringing them into closer contact with people.

Locals from Hatupangan village in North Sumatra had initially suspected the tiger was a supernatural creature so they followed it to its jungle lair, the official said.

The tiger -- which has been seen around the village since last month -- attacked the curious group Sunday, leaving two villagers seriously injured.

They later announced plans to kill the animal, despite warnings by conservation officials not to hurt the endangered cat.

"Unfortunately they would not listen. They insisted on killing the tiger," local conservation agency head Hotmauli Sianturi told AFP, adding that a conservation officer was blocked from preventing the death.

"After killing the animal, the locals hung up its body for display. It's very regrettable." Some internal organs were missing from the tiger's body, said authorities, who are investigating the killing.

Sumatran tigers are considered critically endangered by protection group the International Union for Conservation of Nature, with 400 to 500 remaining in the wild.