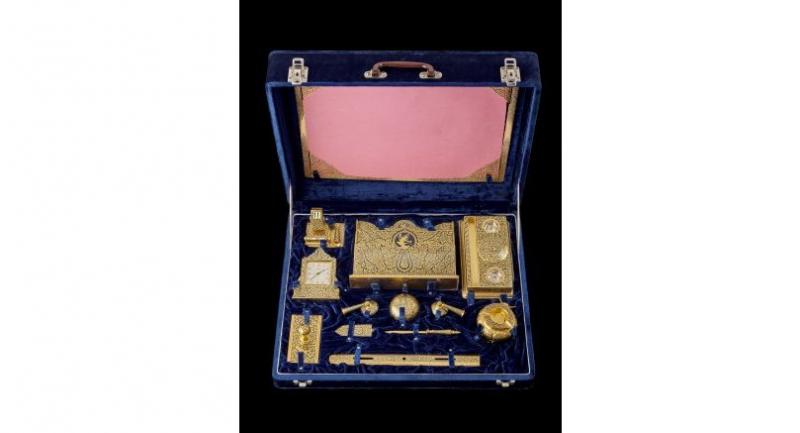 Golden desk set given by King Bhumibol Adulyadej to former US president Dwight Eisenhower in 1960 is part of the display. Photo courtesy of the Dwight D Eisenhower Presidential Library and Museum

His Majesty King Maha Vajiralongkorn will today preside over the opening of an exhibition hosted by the US government at Queen Sirikit Textile Museum, which features nearly 80 gifts exchanged between the country’s heads of state and delegations over the past two centuries of bilateral relations.

Two centuries ago this year, American naval captain Stephen Williams docked his ship in the port of Bangkok in the hope of opening trade between his country and Siam. The mission was a success, and Williams returned home with a letter addressed to President James Monroe from Dit Bunnag, Siam’s foreign minister, conveying the approval of His Majesty King Rama II.

The two nations have maintained an amicable relationship ever since.

The gifts are on loan from the Smithsonian Institution, US National Archives, presidential libraries, Library of Congress, King Prajadhipok’s Institute, the National Museum Bangkok, the Thai Department of Fine Arts and Thai Film Archive.

“Thailand was one of the United States’ earliest friends, and I strongly encourage you to visit the Queen Sirikit Museum and see first-hand how these gifts helped cement that friendship over 10 generations,” said US Ambassador Glyn Davies in a press release.

In 1818, the United States was still a young republic, with little political experience beyond the Atlantic Ocean. The Chakri Dynasty was meanwhile just learning how to navigate the world diplomatically, which included dealing with European adversaries sharing colonial ambitions. Situated on opposite sides of the globe, the US and Siam were not the most likely allies.

“Great and Good Friend” is the salutation President Abraham Lincoln used to address King Rama IV in February 1862 when he wrote to thank King Mongkut for sending “rich presents … as tokens of goodwill and friendship for the American people”, co-curator Trevor Merrion said at a recent talk at Siam Society.

Merrion and ethnomusicologist William Bradford Smith spent nearly a year to prepare the exhibition – most of which is on show for the first time in Thailand.

Among the highlights are historical treaties, letters exchanged between Thai monarchs and US presidents, presidential portraits, golden cigarette cases and lacquerwares.

The show is divided into two parts. The first room portrays the first century of relations, which began during the reign of the King Rama II and former president James Monroe through the reign of King Rama V.

There are also the black-and-white photographs depicting HM King Maha Vajiralongkorn visiting Disneyland when he was a young prince, on June 22, 1960 during a royal visit to the US.

The second room features the last century of relations spanning to the current day.

The show runs through June 30.