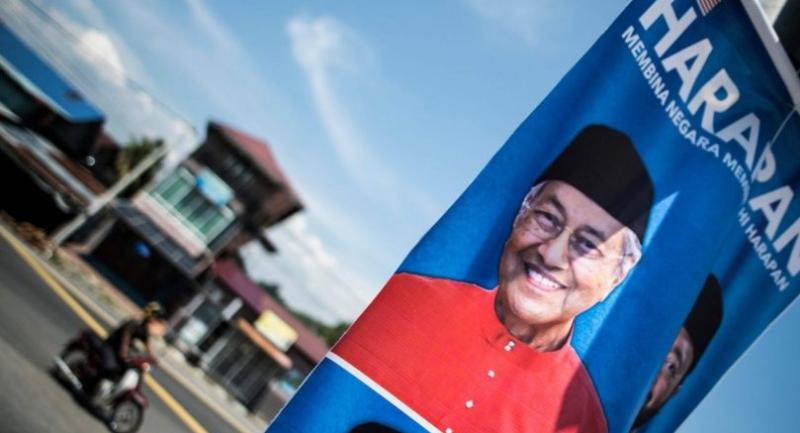 A man rides his bike past an eleddtroal poster of former Malaysian prime minister and opposition party Pakatan Harapan's candidate Mahathir Mohamad on the eve of the 14th general election in Alor Setar on May 8, 2018//AFP Photo

MALAYSIAN authorities have tightened the border with Thailand after 200 people with dual nationality allegedly sold their votes in Northern Kelantan to cast ballots in today’s general election.

Security officials were seen patrolling the boundary and checkpoints in Kelantan, which is opposite Narathiwat’s Sugnai Kolok district.

People are allowed to pass into Malaysia at only two of the eight checkpoints along the border at that location, Thai authorities say.

The 200 dual nationals were deported back to Thailand after they were caught taking 50 Ringgit (Bt 400) each for voting, a border source said. It was understood that they would each get another 200 Ringgit if they managed to cast their ballots today.

There are significant numbers of people in border provinces of Thailand who hold both nationalities and their votes would increase the chances of victory for candidates in northern constituencies.

Northern Kelantan state is a stronghold of opposition to the Malaysian Islamic Party, commonly known as PAS.

Mahathir headed the BN and was the prime minister of Malaysia from 1981 to 2003. He is leading the coalition with his protege Anwar Ibrahim, who was fired and jailed in the late 1990s. Anwar, who has been serving another jail term since 2015, urged Malaysians to vote for Mahathir.

The opposition hopes a surge of support from disillusioned members of the country’s Muslim majority can carry them to an unlikely victory.

They believe Mahathir’s connection to rural Muslim voters can trigger what they have dubbed a “Malay tsunami” and unseat Najib’s coalition after six decades in power.

Amid escalating anger over a massive financial scandal, Mahathir came out of retirement to take on his former protege Najib, upending an election race that had long looked like an easy win for the government.

BN candidates have never believed in the so-called Malay tsunami. Deputy Prime Minister Ahmad Zahid Hamidi said in The Star that Mahathir should be “taking care of his grandkids” instead of staying in politics.

Malays, who make up some 60 per cent of the country’s 32 million people, have long formed the bedrock of support for the BN coalition, and winning over the group is key to victory in the election.

BN has pushed policies that favour Malays over the country’s substantial ethnic Chinese and Indian minorities, supporting them with financial handouts and priority in securing government jobs.

The opposition, which has sought to project a more multi-racial image, has been unable to mobilise support among rural Malays, adding to difficulties of trying to unseat a deeply entrenched government.

But Mahathir’s decision to join the opposition is threatening Najib’s Muslim support base as anger grows over soaring living costs and corruption.

Despite the anger, however, Najib is still expected to win due to what the opposition claims is poll-rigging, and a system that requires only a simple majority of MPs in parliament to maintain power.

Malay complaints over rising costs and stagnant wages have been growing louder in recent years, especially in the countryside, and after the introduction of an unpopular sales tax in 2015.

The scandal surrounding sovereign wealth fund 1MDB has not helped, although in rural areas the complex controversy has generally taken a back seat to economic worries.