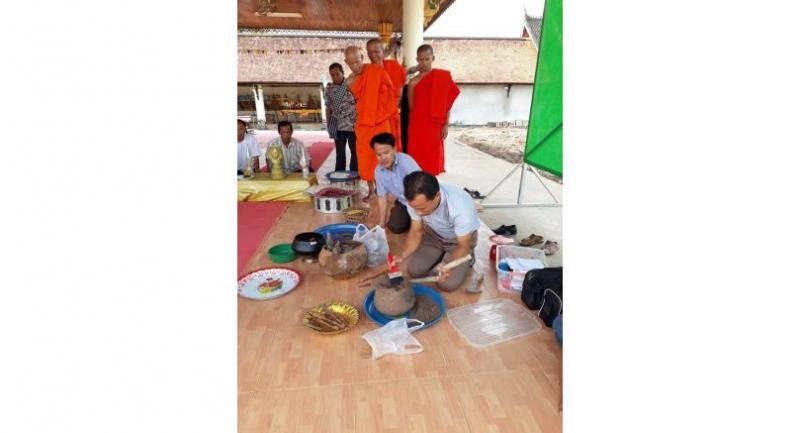 VIENTIANE - Hundreds of Buddha images and other ancient relics, estimated at up to 2,000 years old, have been found in the grounds of That Inghang Stupa recently by local residents carrying out renovations at the site in Kaisone Phomvihane City, Savannakhet province.

The images are made of gold, silver, bronze, wood and other materials and range in height from 8cm to 10cm.

All Buddha images, jars and other ancient objects are now being kept in a secure location, according to a provincial Information, Culture and Tourism Department official.

In an interview with Vientiane Times yesterday, the department’s Deputy Director Mr Khamsith Phommachanh, said the surprise find is currently being kept securely in the city.

“The section’s officials will work with district authorities and other concerned sectors to further study and identify other potential items of interest around the scene,” Mr Khamsith said.

The surprise find of Buddha images and other ancient items is the first major archaeological discovery for many years in the city.

That Ing Hang Stupa is about nine metres high with ornate decoration. It’s reported to house a relic of Buddha’s spine. The 16th century stupa is located in Savannakhet, central Laos.

Savannakhet is famous as the birthplace of Laos’ popular former leader, Kaysone Phomvihane. It was also known as a French trading outpost back in colonial times. There are a number of vintage French colonial and Sino-Franco buildings in the business districts.

The sacred stupa is an important place of worship not only for Lao Buddhists but also devotees from northern Thailand. ‘Dress with respect’ is a must for all visitors. Women may be required to wear traditional sinh before entering the temple grounds, according to the department.

Open daily from 8am-6pm, the stupa is in That Ing Hang village about 15km north of Kaysone Phomvihane City. Visitors can go there by taking a tuk tuk and taxi for the roundtrip or rent a motorbike.

If coming from Thailand, visitors can easily cross the 1.6 km-long Friendship Bridge from Mukdahan province to Laos’ Savannakhet.