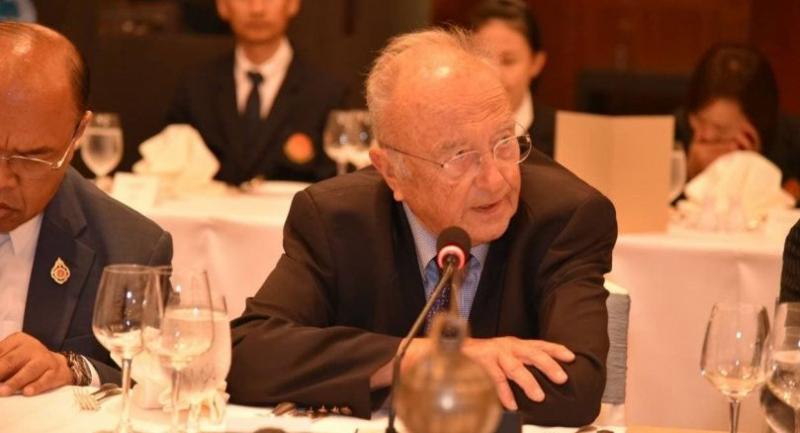 UNLIKE its Thai counterpart, Germany’s Constitutional Court has rarely come under criticism and enjoys the implicit trust of the people, thanks to the faith of the citizens that their rights and liberties will be fully protected by the court, according to a German law expert.

In Germany, the Federal Constitutional Court is a respected institution and enjoys an equal status with the three branches of a democracy, said Rupert Scholz, who served as defence minister in the Helmut Kohl government.

Scholz cited a German poll result that said the court was “the most recognised institution”.

“No chancellor can earn as much faith as the court,” said Scholz, a recognised expert on constitutional and European economic and labour laws as well as economic administration. He was speaking at a dinner talk on “Tasks and Missions in accordance with the German Constitution: Judgement, Administration and Budgeting”, co-organised by the Office of the Constitutional Court and Konrad Adenauer Stiftung in Bangkok recently.

He said the court also serves as a balance between law and politics when reviewing cases.

In Germany, the judges do not consider the suitability of a law but only review whether the law is constitutional, he explained. “The role of the court is as the ‘guardian’ of the constitution and as the authority that reviews the constitutionality of the laws,” the professor said.

The court respects the spirit of the legislators and, therefore, does not immediately invalidate unconstitutional laws. However, on several occasions it has annulled some articles of a law instead of the entire law. “The court gives a year to two years’ time to legislators to amend the parts considered unlawful,” he added.

Thailand has adopted the concept of the court from Germany where its main roles are judicial review and to rule on the constitutionality of legislation. However, there are some areas of divergence in the responsibilities of the two courts. One of the German court’s key tasks is to rule on complaints related to the constitution, which is an extraordinary remedy for the protection of constitutional rights.

In Germany, any citizen or person of any nationality living in the country can approach the court if they believe their constitutional rights have been violated by a public power. The complaints, however, can be filed only after a ruling from the Federal Court of Justice, the country’s supreme court.

In other words, the role of the constitutional court is very clear: to consider petitions from the public against a state authority, including the actions of the judicial branch. In Thailand, however, that clarity is missing in defining the court’s role, Banjerd Singkaneti, a law scholar at the National Institute of Development Administration, pointed out.

Banjerd said Thai laws were not explicit about rights and liberty violations over which the public can petition the Constitutional Court.

Banjerd noted that only 2 per cent of more than 200,000 complaints filed with the German court are actually successful [a win for the public]. Though the number was small, it could have the effect of making the lower courts of justice exercise their powers with discretion due to the realisation that they can be scrutinised by the Constitutional Court, he said.

However, giving such power to the high [Constitutional] court could be a double-edged sword if the court were not independent, he added.

Banjerd believes there should be some room for the Thai Constitutional Court to review the final ruling by the courts of justice, especially in cases where the verdict fundamentally overlooks facts, the law, and the rule of law.

The Thai Constitutional Court has previously been criticised for making controversial rulings that altered the shape of governments and has been accused of having double standards.

In several cases, the Thai judges’ ruling appeared to stress the principles of political science rather than the legal aspects. The decision to dissolve the Thai Rak Thai of Thaksin Shinawatra and its successor People Power Party, while sparing the Democrat Party over a similar ordeal stand out as examples.

Early this year, the legislators passed an organic law that protects the Constitutional Court from criticism. The law stipulates that those who use rude, sarcastic or threatening words will be punishable by up to one month in jail and a fine of Bt50,000. Scholz said in his view the court can be criticised but without using force.

“The court has to accept criticism. It should not bar freedom of expression, especially relating to academic matters,” he said.

When asked about the constitutionality of a political party’s proposal to amend the charter after winning an election and whether the Constitutional Court should intervene to stop such an action, the professor said the court cannot stop the amendment.

Some anti-junta political parties such as Pheu Thai and Future Forward Party have vowed to scrap the current Constitution, which they called undemocratic, and write a new charter if they win the election.

“Any party that wins a majority has the right to amend a charter if it so chooses, as long as they don’t use force [to achieve that],” the German professor said.

A party’s intention to write a new charter does not contradict the principle of liberal democracy, he said.

To amend a charter, the parties need to adhere to and not be against the intention of the charter under a democratic regime, he added.

The professor shared a similar case in his country dating back to the period after the reunification of Germany in 1990.

Scholz was a member of the joint parliament committee, which considered the question of whether the country should have a new charter. The concerned parties, however, agreed that the existing charter was still usable and decided to just add more provisions to bring it up to date.