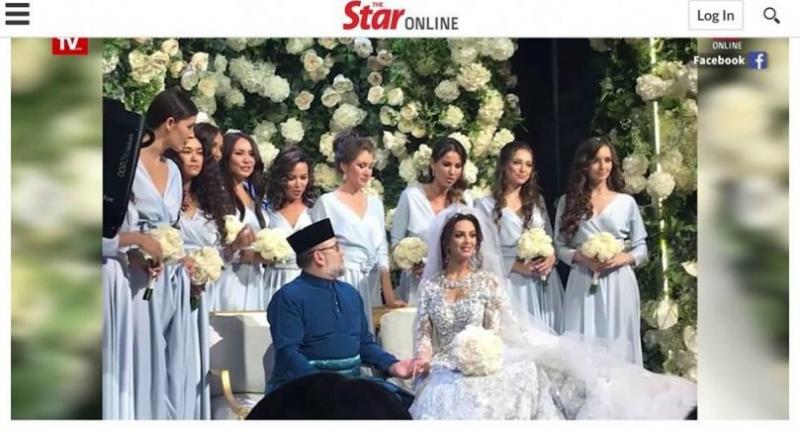 AS photos of the purported wedding between the Yang di-Pertuan Agong Sultan Muhammad V and a former Russian beauty queen go viral online, Prime Minister Dr Mahathir Mohamad says he has no knowledge of the union.

“I don’t know. I don’t have any official confirmation, so I can’t say anything,” Dr Mahathir replied when asked by a member of the media during a press conference at the Parliament yesterday.

Speculation has been rife ever since the pictures emerged showing the 49-year-old Ruler and Oksana Voevodina, 25, who is Miss Moscow 2015, apparently tying the knot.

The ceremony supposedly took place on Nov 22 at a concert hall in the Moscow suburb of Barvikha, after the former beauty queen is said to have converted to Islam.

In one of the viral pictures, the couple are seen smiling and clad in Malay traditional outfits, with Voevodina wearing a headscarf.

The news of their “marriage” has been spreading on social media and even in some British tabloids, but as of yesterday, Istana Negara had not issued any statement on the matter.

According to the British-based Mail Online, the King met Voevodina, whose father is said to be a doctor, 18 months ago when she was modelling luxury watches.

Reports also said the wedding was alcohol-free and served only halal food.

She is believed to be a business graduate from the elite Plekhanov Russian University of Economics.

Sultan Muhammad V is currently on leave as the Yang di-Pertuan Agong from Nov 2 until Dec 31.

The Sultan of Perak, Sultan Nazrin Muizzuddin Shah, is exercising the functions of the Yang di-Pertuan Agong during this period.