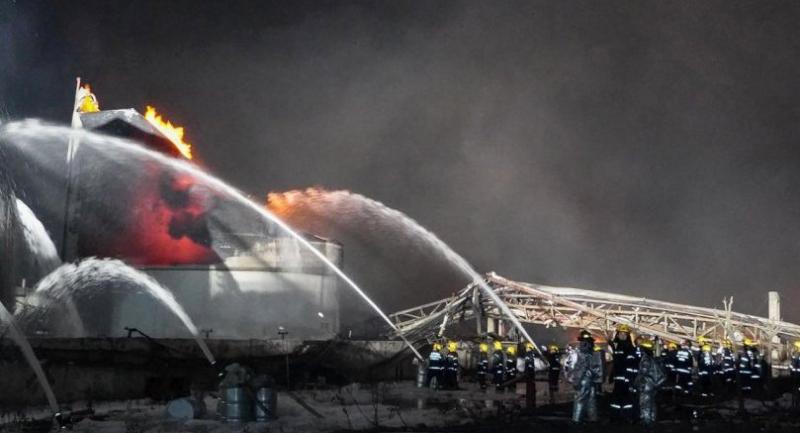 Firemen work following an explosion at a chemical plant in Yancheng in China's eastern Jiangsu province early on March 22.//AFP

Yancheng, China - The death toll from a huge explosion at a chemical plant in eastern China surged to 44 on Friday, making it one of the country's worst industrial accidents in recent years.

At least 90 other people were seriously injured in Thursday afternoon's blast at the industrial park in Yancheng, said the city government on its official Twitter-like Weibo account after firefighters battled raging fires through the night.

City officials had previously said that at least 12 people were killed and 30 injured in the explosion.

The explosion was so powerful that it apparently triggered a small earthquake, knocked down several factory buildings and shattered the windows of homes a few kilometres away.

Hundreds of rescuers have been dispatched to the scene of the facility run by Tianjiayi Chemical, local authorities said, and more than 3,000 people have been evacuated from the blast site.

Authorities, who are investigating the cause of the accident, said an unspecified number of people were taken into police custody.

The force of the explosion blew out windows and dented metal garage doors of buildings as far as four kilometres (2.5 miles) from the site, said AFP reporters at the scene.

Nearby residents have started sweeping up glass, and in some cases, seemed to have abandoned their homes entirely. Black smoke could still be seen rising from the chemical plant on Friday morning.

Workers covered in blood were seen running out of the factory, said official news agency Xinhua on Thursday, citing witnesses.

An aerial view of the blast area showed a large swath of destruction in the industrial park, where multiple fires had initially raged.

The city government said fires in three chemical tanks and five other blazes in the area were extinguished.

In November, a gas leak at a plant in the northern Chinese city of Zhangjiakou that will host the 2022 Winter Olympics killed 24 people and injured 21 others.

A report published by local authorities in February revealed that the Chinese chemical firm responsible for the accident had concealed information and misled investigators.

In 2015, China saw one of its worst industrial accidents when giant chemical blasts in the northern port city of Tianjin killed at least 165 people.