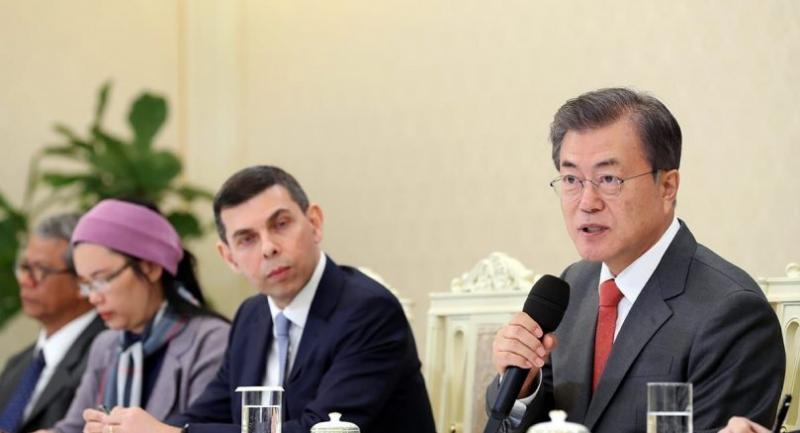 SOUTH KOREA’S President Moon Jae-in yesterday expressed optimism as he pledged to do his best to facilitate the resumption of the United States-North Korea dialogue process in the near future.

Speaking to editors from Asia News Network (ANN), Moon said the failure of the second summit between US President Donald Trump and Kim Jong-un was a great disappointment the world over.

“But because Chairman Kim and President Trump have been expressing their willingness to continue the dialogue for a third US-North Korea summit take place, and to be a successful one, I’m also looking forward to seeing Chairman Kim, and will do my best [to facilitate] further dialogue between the US and North Korea,” Moon said.

While Trump and Kim failed at the Hanoi summit in late February to reach a deal on the denuclearisation in exchange for lifting economic sanctions, their “friendly walk-away” from the meeting avoided shutting the door on a future summit.

Moon was hailed for achieving a breakthrough when his first inter-Korean summit with Kim in Panmunjom on April 27 last year significantly reduced military tensions in the Korean Peninsula and paved the way for the first Kim-Trump summit in Singapore two months later.

Since the two inter-Korea summits and two US-North Korea summits, Pyongyang has not launched any nuclear or missile tests over the past 18 months, Moon noted.

“The momentum of seeking resolution to this problem through dialogue and diplomacy has been ongoing, and so the positive trends and progress will continue in the future,” he said. The meeting between Kim and Russia’s President Vladimir Putin yesterday was also a positive trend for the Korean Peninsula, he said.

Asked if Indonesian President Joko Widodo’s idea to invite North Korea’s Kim to the Asean-South Korea commemorative summit in November would come to fruition, Moon said he was working on it.

There would be more consultations between Seoul and Asean and any change in circumstances on the Korean Peninsula in the coming months would also be taken into consideration, he said.

“Of course, such a meeting is not within [our] complete control,” Moon told ANN’s editors. All the members of Asean would first have to agree to such a meeting, as would Kim.

A meeting between the 10-member bloc and North Korea would be an unprecedented recognition of Pyongyang’s attempts to normalise its foreign policy and a major step forward in Moon’s rapprochement with the North.

The Asean Regional Forum is one of only two forums (the other being the UN), to which Pyongyang annually sends ministerial level representatives.

However, recent events including the assassination of Kim Jong-un’s brother in Kuala Lumpur, have soured relations with Malaysia and may present a speed bump for an invitation to Kim to attend a possible meeting.