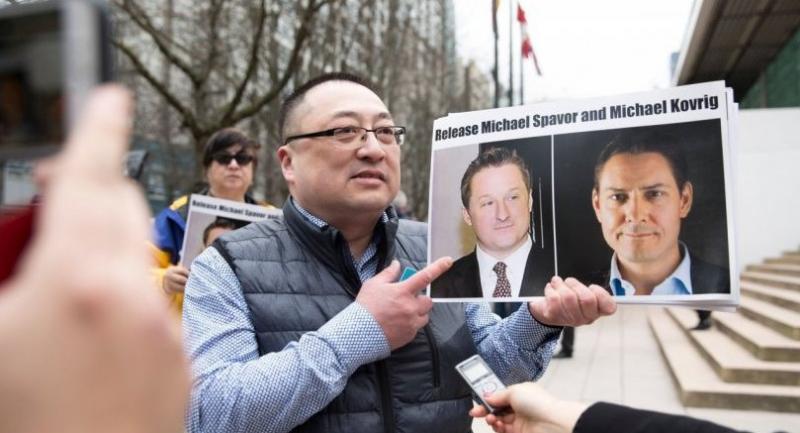 This file photo shows Louis Huang of Vancouver Freedom and Democracy for China holding photos of Canadians Michael Spavor and Michael Kovrig, who are being detained by China, in Vancouver.//AFP

Beijing - China has formally arrested two Canadians who have been detained for months on national security grounds, a Canadian newspaper reported on Thursday, in a case that has inflamed tensions between Ottawa and Beijing.

A Canadian government source told The Globe and Mail that neither Michael Kovrig, a former diplomat, nor Michael Spavor, a China-based businessman who organised trips to North Korea, have been formally charged with any crime.

"Canada strongly condemns their arbitrary arrest as we condemned their arbitrary detention on Dec. 10," the Canadian foreign ministry said in a statement to the newspaper.

Though no link has been officially made, the detention of Spavor and Kovrig is thought to be in retaliation for Canada's December 1 detention on a US extradition request of Meng Wanzhou, a top executive of Chinese telecom giant Huawei who is accused of violating Iran sanctions.

The men were first accused of activities that "endanger China's security" -- a phrase often used by Beijing when alleging espionage.

China later announced it suspected Kovrig, who works for the International Crisis Group think tank, of spying and stealing state secrets and alleged that Spavor had provided him with intelligence.

Spying charges could expose them to tough prison sentences.

Both men have been denied access to lawyers and allowed only monthly consular visits. The latest such visit came earlier this week.

No details of the men's detention or health conditions were provided due to Canadian privacy laws, but officials said they would press for further access to both detainees.

China has also never announced where the men are being held.

A group of Canadian parliamentarians had earlier complained to Chinese officials that Kovrig and Spavor have been denied access to lawyers, and remain in "completely unacceptable" detention conditions.

Meng is allowed to live in her Vancouver mansion, although her mobility is limited. She made her latest court appearance last week as she fights extradition to the United States.

She has been ordered to wear an electronic anklet and hand over her passports after being released on bail in mid-December on a Can$10 million (US$7.4 million) bond.

Two other Canadians convicted of drug trafficking, meanwhile, have been sentenced to death. Canada has called the death penalties for Fen Wei and Robert Lloyd Schellenberg "cruel and inhumane".

Ottawa has rallied the support of a dozen countries, including Britain, France, Germany and the US, as well as the EU, NATO and the G7, in its diplomatic feud with China.

Washington, meanwhile stepped up its battle against Huawei on Wednesday, effectively barring the company from the US market and restricting US sales to the firm.

The United States has urged allies to shun Huawei's 5G technology, warning that it could serve the interests of Chinese intelligence services.