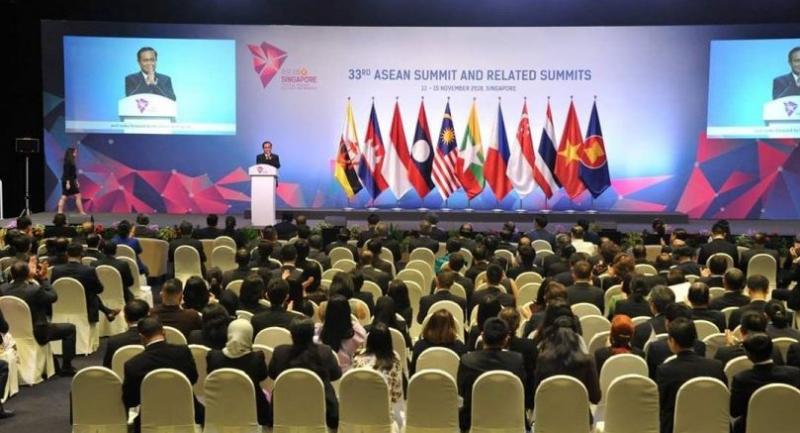 Security plans include 10,000 police on alert around central Bangkok

Southeast Asian leaders assembling for the Asean Summit in Bangkok this coming weekend will discuss a range of issues including Indo-Pacific strategy and the Regional Cooperation Economic Partnership (RCEP), and possibly Myanmar’s Rohingya crisis, Thai officials have said.

The summit on Saturday and Sunday has as its theme “Advancing Partnership for Sustainability”. It is expected to generate a string of policy statements including direction on marine debris and an “Indo-Pacific Outlook”.

Prayut Chan-o-cha, royally endorsed as prime minister last week, will chair the summit despite not yet having a Cabinet in place.

Foreign Minister Don Pramudwinai, who has served in the military-backed government since August 2015, will assist Prayut on both the substance and protocols of the gathering. He has hinted he might leave office after the summit.

Deputy Prime Minister Prawit Wongsuwan, who is in charge of national security affairs, is expected to complete security plans for the summit today.

They will include the deployment 10,000 police officers at key locales in the capital, said deputy police chief Srivara Ransibrahmanakul. Srivara declined to say whether intelligence officials had detected any cause for concern.

The leaders of Asean and its regional partners will not soon forget the summit held in Pattaya a decade ago, when anti-government red-shirt protesters stormed into the meeting venue, forcing a hasty evacuation.

Srivara said traffic intersections on Wireless, Phloen Chit and Sarasin roads would be closed over the weekend to facilitate the movements and security of summit participants.

Suriya Chindawongse, director general of Asean affairs at the Foreign Ministry, confirmed that the leaders of all 10 member-nations would attend. He described the gathering as an “in-house summit”, with no leaders of partner states in attendance. He could not say whether Myanmar’s troubles regarding Rakhine state will be among the issues discussed.

“What we can say is that Asean, notably under Thai chairmanship, gives importance to the situation in Rakhine,” Suriya told reporters.

“At the retreat meeting in Chiang Mai in January, it was agreed for the first time that the group’s role in providing humanitarian assistance to Myanmar, facilitating the repatriation of [refugees] and fostering sustainable development in Rakhine should be enhanced.”

The regional bloc, of which Myanmar is a member, has worked out tentative plans for the repatriation of the Rohingya who fled violence at home and took refuge in Bangladesh.

As to Indo-Pacific strategy, Asean will issue its “Outlook” paper at the end of the summit, taking into account competing efforts by both China and the United States, the world’s major powers, to expand their influence in the region.

Suriya said Asean was striving to secure shared benefit for all stakeholders amid the shifting geopolitics straddling both the Pacific and Indian oceans.

He cited the bloc’s leading role in formulating the Treaty of Amity and Cooperation and its firm stance in advocating connectivity and sustainability in linking the oceans.

On the economic front, Asean is seeking to conclude negotiations over the RCEP, the world’s biggest economic bloc, under Thailand’s chairmanship by the end of this year. But an economics official said the prospects for doing so are not promising.

Established in 2013, the RCEP has representation from 16 economies – all 10 Asean countries plus Australia, New Zealand, China, India, Japan and South Korea. They have formalised 20 chapters of a pact aimed at liberalising trade and services but have found agreement on only seven, said Oramon Sapthaweetham, director-general of the Commerce Ministry’s Department of Trade Negotiations.

“Since the member-countries are determined to reach a conclusion this year, we remain hopeful that we can at least complete a significant portion during the next summit in November,” she said. In Bangkok this weekend, the Asean leaders will seek common ground on how to move the RCEP process forward, Oramon said.

Documents to be noted

Report of the Secretary General of Asean on Asean Work

Report of Executive Director of the Asean Foundation

Documents to be adopted

Documents to be issued

Source: Compiled by The Nation