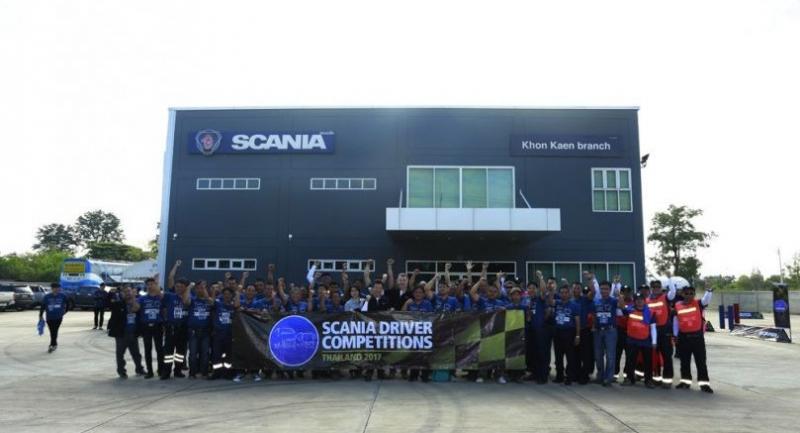 Scania celebrated its 30th anniversary in Thailand by holding a CSR event, “Scania Driver Competitions Thailand 2017” aiming to encourage truck and bus drivers to become competent and determined on the road under the concept “4D.”

The Scania Driver Competitions Thailand is held every two years, and this year is the 4th time which almost 3,000 drivers in Thailand participated. Scania believes that the driver is the single most important asset for economy, the environment and safety.

Gearing up to face the challenges under the concept of “4D” which are 1. Dare to Be (to be a best driver) 2. Dare to Change (towards better attitudes) 3. Dare to Do (to do better things) and 4. Dare to Give (to pass better thing to others people).

Thasanan Piya-aksornsak, marketing and communications manager of Scania Siam said that the semi-final round of the competition was held on October 7 at Scania’s Khon Kaen branch.

Six winners of each category will compete against each other in the Final round holding November 18 at Metro Life Park Rama 9. The winner, 1st runner-up, and 2nd runner-up will receive a cash prize and a trophy, which they will receive Bt100,000, Bt50,000, and Bt30,000 consecutively.

The transport operators will also get a special training course “Advance Driver Program: Train The Trainer” with Scania which the winner will get 4 seats, the 1st runner-up and 2nd runner-up each get 2 seats.

Thasanan said that bus or truck accident happened are big costly. Scania focus and wants to improve bus and truck driver’s attitude to be aware on safety driving, social responsibility, be generous on road, and be able to handle unexpected incident on the right way. When the drivers attend the event, they will experience about all these and got the right skills to be the best driver.

Scania Driver Competitions 2014-2015 was the sixth edition of this truly interna-tional event, since it was established in 2003.

Phuriwat Rak-Intr, retail operations director of Scania Siam Co, Ltd said that this year is the year of the celebration as it is the 30th year of Scania in Thailand and the 125th year internationally.

The CSR event “Scania Driver Competitions Thailand 2017” was held by Scania Siam Co., Ltd., official partners by Department of Land Transport, Anti-Drowsy Driving Fund, Ramathibodi Foundation under the Patronage to Her Royal Highness Princess Galyani Vadhana and ID Driver Institution. Official sponsor is Michelin Siam Co Ltd, This event aims to seek for the best truck and bus driver who are up for the challenges and well qualified as the best skilled driver.