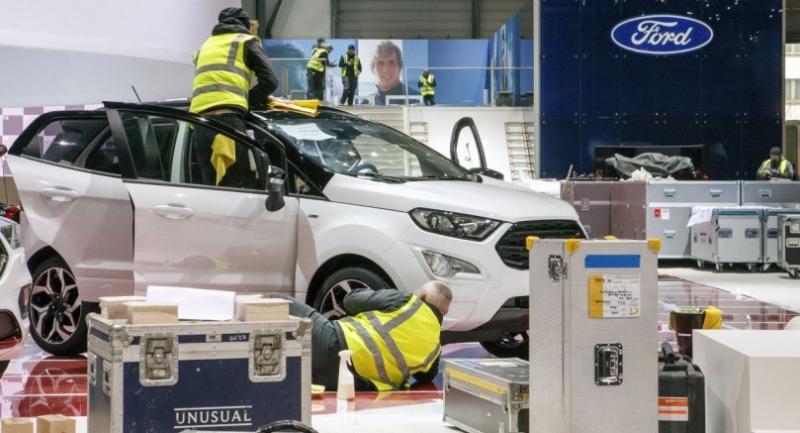 Representatives of the Ford booth clean a car during the last preparations prior opening of the press preview days at the 88th Geneva International Motor Show, in Geneva, Switzerland, 03 March 2018. // EPA-EFE PHOTO

This year's Geneva Motor Show comes at a curious time for an auto world enjoying record profits yet also gripped by doubt midway through the grand transition from diesel to electric and self-driving vehicles.

"Geneva really ought to have been a lovely salon," says, with heavy irony, Ferdinand Dudenhoeffer, director of German-based Center Automotive Research of a Europe's first major car show of the year running from March 8 to 18. (FILES) This file photo taken on March 7, 2017 in Geneva, shows a general view during the first press day of the 87th Geneva International Motor Show. Electric cars sales accelerate in the world, a trend that is expected to be reflected at 2018 Geneva Auto Show opening on March 8, 2018. / AFP PHOTO

"But behind the glamour and the finery are plenty of worry wrinkles."

Number one overriding concern is the increasing slide in diesel sales, a blow for European constructors who had essentially sought to bet the house on diesel as they strove for years to cut CO2 emissions with the support of public authorities.

The emissions cheating scandal, which blew up at Volkswagen in 2015, has heaped discredit on a technology criticised for belching out nitrogen oxide and harmful particulates.

Major cities including Paris have announced their intention to ban diesel progressively while a top German court last month opened the way to banning older diesel cars from the streets on air quality grounds.

Diesel's fall from grace has pushed constructors to turn their attention to production of more-in-demand models running either on petrol, dubbed "dinosaur juice", or else make the jump to electric or at least hybrid.

The top global constructors have earmarked investments worth tens of billions of euros (dollars) over the past few years to accelerate their push to electric. Yet the commercial upshot of the strategy remains unclear.

This year's Show, the 88th edition, will see the unveiling of several new electric models and concepts at Tuesday and Wednesday's media days, before opening its doors to the general public on Thursday.

Among new potential star turns are Jaguar's first all-electric model as it shows off the production version of its I-Pace, as well as Hyundai's Kona, advertised as the world#s first fully electric subcompact SUV.

Constructors also have to contend with the fact that where fuel engines are concerned, their greater emissions of CO2 will render a tough challenge compliance with future European norms.

They will have to cut CO2 emissions to an average 95 grams per kilometre across the board by 2021 from 130 grams in 2015, or else face swingeing fines.

Auto makers are bound to continue investing, furthermore, to ensure improved performance of their combustion engines as these still make up the bulk of sales. And yet they will prove progressively less of an earner as volumes inexorably fall off.

Traditional constructors also have a wary eye on sector newcomers, led by those in the electric vanguard such as Tesla, as well as giants from the high-tech such as Apple or Google and would-be Chinese rivals all seeking their slice of a "smart car" cake.

The future belongs to those whose vehicles enjoy ever more autonomy through increasing recourse to artificial intelligence and telecommunications.

Such qualities are not the preserve of the traditional automobile constructor.

The last few weeks have seen a slew of carmakers post record profits -- but the question is the degree to which that will act as a springboard to paying for the switch to a new auto-tech world.

Eric Kirstetter of the Roland Berger consultancy told AFP that, currently, some constructors are doing "very well," yet their "future is very complicated".

They must "reduce costs in such as way as to make savings allowing them to achieve their R&D plans," said Kirstetter, adding this will involve surmounting "a problem of squaring the financial circle."

That, he says, is "an equation extremely difficult to resolve in order to make the necessary investments to develop new generations of vehicles while continuing to invest massively in improving the combustion engine" in the shorter term.

The task may be more readily surmountable for pioneers in the development of alternatives to diesel, including the Renault-Nissan alliance, with both leaders in the move towards electrification, while Toyota has the early jump on the hybrid market.

However the future of a metamorphosing industry ultimately pans out, the 700,000 Salon visitors expected to descend on Geneva's Palexpo in the coming days will be able to cast their eyes over some 900 vehicles.

Monday will see the car of the year unveiled from seven finalists for the accolade. Representatives of the FIA booth fix up a electric car Formule E, during the last preparations prior opening of the press preview days at the 88th Geneva International Motor Show, in Geneva, Switzerland, 03 March 2018. // EPA-EFE PHOTO