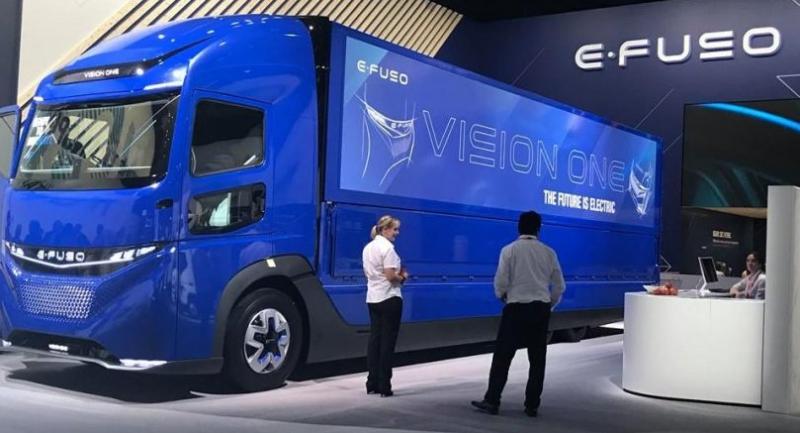 FUSO Vision One: A prototype for the electric Heavy Duty truck.

DAIMLER AG, Germany’s leading automaker, is confident that the sale of its trucks in Thailand and other Asian countries will grow significantly this year.

The sales of Daimler trucks in Thailand rose 60 per cent year on year to 178 units in the first half of the year, Daimler executives told Asian media on Wednesday at the 67th International Commercial Vehicles Motor Show 2018 in Hanover.

Daimler sold 111 units of its FUSO truck brand in Thailand in the first half of 2017, and has now expanded its line-up to include light trucks in the Kingdom this year.

The group’s immediate plan is to invest Bt450 million in a CKD (complete knock down) assembly plant in the Eastern Economic Corridor, with an annual production capacity of 4,000 trucks and bus chassis in the first phase of the project. The project will be 100 per cent dedicated to the Thai market.

Construction of the plant is scheduled to begin next month and should go into operation by the second quarter of next year. The CKD plant in Thailand will import parts from Daimler’s manufacturing plant in India.

“We have committed ourselves to doing long-term business in Thailand,” Hartmut Schick, head of Daimler Trucks Asia, said.

He said he is optimistic that Thailand and other markets in the region will continue to grow at a rapid rate in the years to come as Daimler Trucks Asia has seen solid sales growth in the first half of 2018.

Sales in Japan rose 3 per cent to 22,341 units, as the market there is stable so growth is not that high, Daimler executives said.

The group’s manufacturing plant in India has produced 100,000 units since 2012, and the production of the next 100,000 units should take a shorter time, Schick said.

At the Hanover show, Daimler also launched new models of trucks, buses and vans, equipped with new technology. The group also showcased its electric truck, bus and van at the show, as Daimler foresees the “future as electric”. Also highlighted was the Mercedes-Benz Citaro hybrid, which has won the Bus of the Year 2019 title, and an autonomous driving concept car.

Daimler’s newest model of the Mercedes-Benz Actros truck comes with an Active Brake Assist 5, which it claims will provide more safety, and mirror cameras.

The Actros consumes 3 to 5 per cent less fuel than other trucks thanks to its Mercedes PowerShift 3 automated transmission and lower air resistance of its mirror cameras, Daimler said.

Martin Daum, head of Daimler Trucks, said the new Actros can even be driven by inexperienced drivers.

The IAA 2018 Commercial Vehicles kicked off yesterday and runs until September 27.