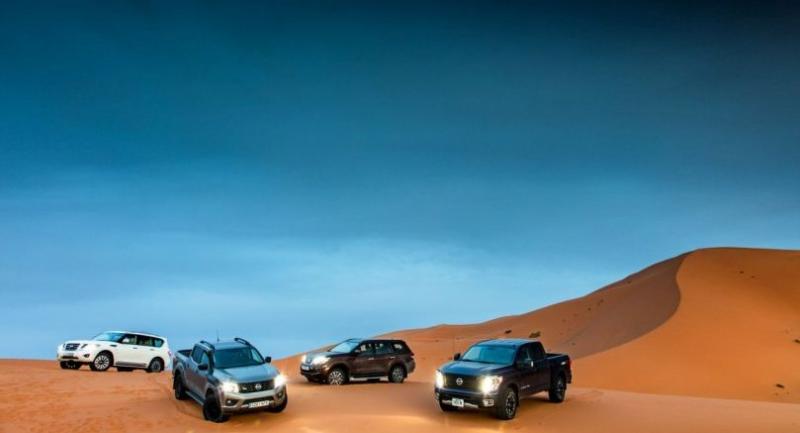 Nissan LCVs put to the test at the Moroccan sand dunes.

Nissan is hoping to sell almost 1 million light commercial vehicles (LCVs) around the world this year, reflecting the increasing popularity of these

According to the Yokohama-based manufacturer, one in six vehicles it sold around the world last year were an LCV, and half of those were pick-ups. Nissan’s mid-term plan is to grow sales by 40 per cent within 2022, and registering an operating profit of above

Nissan recently held a special driving event in Morocco for auto journalists from several markets around the world, including Thailand. It picked four outstanding models from its global LCV lineup to be driven in varying Moroccan conditions, ranging from tarmac to rocks to beautiful but treacherous sand dunes.

The lineup was interesting, as it featured models from different continents – the large Titan pick-up from the US, the Patrol SUV from Japan, Navara 1-ton pick-up from Spain and the Terra PPV (pick-up passenger vehicle) from the Philippines (the recently-launched Thai version fitted with a newer engine could not make it in time for the event).

Also on display and featured were specialised vehicles from the Nissan stable, including the Armada Mountain Patrol, Patrol Fanta Limon, and Navara Dark Sky Concept (along with the observatory-class telescope on a bespoke off-road trailer) that was developed with the European Space Agency. The Dark Sky was just unveiled in September at the Hanover Motor Show.

Upon arrival in Er-Rachidia in Morocco, journalists from Australia, Indonesia, the Philippines, the Middle East and Thailand took up position in three caravans featuring the four models, and switched vehicles throughout the three-day drive in order to experience what each had to offer under different conditions.

Although it was tiresome to change vehicles all day long, it was easy to notice the strengths of each truck, as well as their weaknesses. For example while the Patrol and Titan offered highly comfortable rides and had large, high-torque 5.6-litre V8 petrol engines that were perfect for on-road as well as rock driving, the lighter and diesel-powered Navara and Terra were easier to handle on the sand dunes.

The sandy Moroccan landscape was spectacular enough to make Windows screensavers, and it was no wonder why it was chosen for several movie sites (including The Mummy and Spectre).

While light off-roading sections of the drive were easy to deal with (2WD did fine on some parts), the sand dunes were definitely the big challenge for those trying it for the first time.

Having some experience in tricky sand before, I knew that the team of Spanish instructors were serious when they stressed that going up and down steep dunes had to be done in a straight line.

The importance of throttle timing is multiplied in sand driving, and only experience can teach you how much to press (or ease) that throttle in order to maintain the right momentum and glide through the sandy terrain. It’s rather against your instinct, but once you get the driving line and timing right, you’re fine.

Fortunately we weren’t forced to cross particularly steep dunes that are really scary, especially for those with a fear of heights), and actually had a challenging (and fun) time at the sand dunes on the northern tip of the Sahara Desert.

Er-Rachidia is the capital and largest city of the Draa-Tafilalet region in eastern Morocco. It has approximately 90,000 inhabitants scattered across a sparsely populated area.

Once part of the Paris-Dakar Rally (2006 and 2007) Er-Rachidia has long been considered the “gateway to the desert”. After driving past the city, there are numerous terrain changes including some with gruelling conditions.

The Titan was my favourite model in this lineup, not only because it is huge (the cabin is so wide it’s impossible to reach the passenger-side door panel), but because of the throbbing 5.6-litre V8 and the large number of extra features offered. It just makes the top Thai pick-up trucks look like children’s toys.

The 2018 Patrol continues a heritage begun in 1951, when it was first used as a military vehicle. Over the years, the Patrol has evolved into a large SUV offering high comfort levels along with off-roading capability for civilian buyers.

The Navara is built in Thailand and also in Barcelona, and comes with a multi-link rear suspension providing a high level of comfort compared to the conventional leaf spring type. Another strong point of the Navara is its passenger car-like interior, giving a more upmarket feel than regular commercial-grade trucks.

After launching the first Terra model, Nissan denied plans for a PPV version, but it eventually arrived. Being the late bloomer in the PPV market, the Terra needed to offer attractive features like a rear-view monitor and double-wishbone/5-link rear coil spring suspension tuned for handling and ride comfort.

The Terra was first offered in China, and is currently being launched in Asean markets, while Australia, the Middle East and South America could also welcome it in the future.