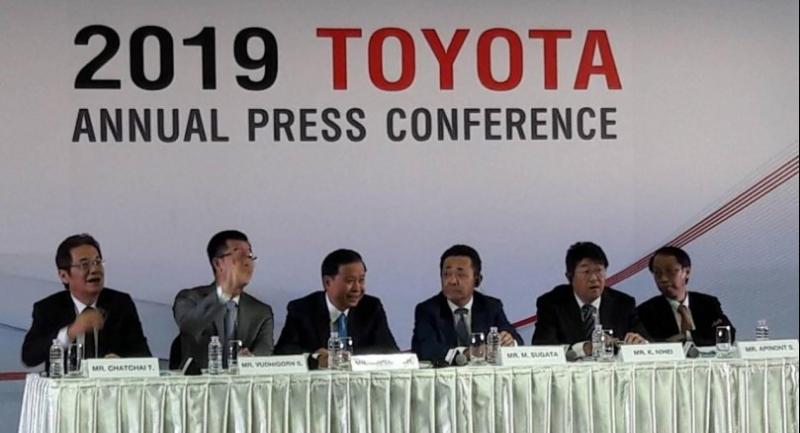 By   KINGSLEY WIJAYASINHA
THE NATION

TOYOTA MOTOR Thailand (TMT) Co Ltd expects Thailand’s auto sales to remain at the 1-mllion-units level this year due to the continuing economic stimulus and the launch of a large number of new models.

“Last year we expected the market to reach 900,000 units but due to the effective economic stimulus measures as well as attractive promotions all year round, the market was able to grow to over 1 million units,” senior vice president Vudhigorn Suriyachantananont said.

In Thailand, the company plans to grow sales by 4.7 per cent to 330,000 vehicles this year. Exports, however, are expected to drop by 5.8 per cent due to weaker markets in the Middle East and Latin America.

Despite several major automakers lowering their production in China due to the China-US trade conflict and shifting it elsewhere, Toyota executives have confirmed they have no plans to relocate Chinese production to Thailand.

While Toyota has big plans to produce hybrid and EV passenger cars in Thailand, it has no plans to introduce the technology to the large number of commercial vehicles that it produces here. The company plans to roll out over 180,000 one-ton pickups and PPVs this year, Vudhigorn said.

“We think the best thing for pick-up trucks is using biodiesel rather than EV technology, which has been found to be effective in lowering emissions in diesel engines,” said Ninnart Chaithirapinyo, who chairs the TMT board.

Last year a total of 1.039 million vehicles were sold in Thailand, marking a growth of 19.2 per cent, added Michinobu Sugata, TMT president.

“This is the third time that auto sales have exceeded the 1-million-unit mark in Thailand,” he said. “The Thai auto market grew by 19.2 per cent last year due to the economic stimulus measures from the government that helped raise the GDP level to 4.2 per cent,” Sugata said.

He said this year the market should also reach a million units, “due to clear and ongoing government investment projects, which help stimulate investment from the private sector, as well as introduction of new models into the market.”

Toyota is also the largest auto exporter from Thailand. Last year it shipped out 293,940 CBU vehicles worth over Bt154.5 billion (down 1.8 per cent) along with OEM and parts worth over Bt119.2 billion. Thailand is one of the largest production hubs for Toyota worldwide – in total, the company produced 588,939 vehicles in Thailand last year for both the domestic and export markets.