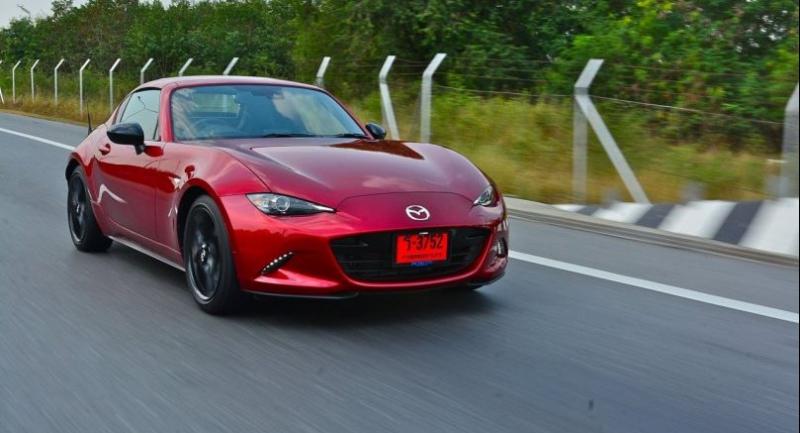 Retractable Fastback version of the MX-5, replacing the soft-top offering, will add more fans to a series that is basking in its own aura in Thailand

The Mazda MX-5, the world’s best-selling open-top sports car, has long been the symbol for fun and freedom, and the fourth generation now comes with a Retractable Fastback (RF) version.

In Thailand the fourth-gen MX-5 was introduced back in 2016 with the soft top version, which was replaced by the RF last year.

Mazda says that there are few customers for the canvas-back MX-5 as customers prefer the RF, which opens and closes within 13 seconds (unfortunately only at speeds not over 10km/h).

The electrically powered retractable hardtop consists of front-, middle- and rear-roof sections and the rear window glass panel. When open, the rear roof remains on the body while the other parts are stowed neatly in the space behind the seats.

Apart from the roof, there’s not much difference when compared to the ragtop, except for the transmission.

While the soft top was offered only with automatic transmission, the RF now has a manual gearbox version as well. It turns out that there have been customer requests for the manual, which shows that there are still people out there who enjoy driving the classic way.

So when distributor Mazda Sales (Thailand) Co Ltd organised a test drive for the MX-5 RF from Bangkok to Kanchanaburi last week, I pounced on the six-speed manual version, leaving others surprised as they prefer the lazy automatic.

Compared to the older-generation MX-5, the current model offers the highest level of refinement, both in terms of design as well as handling. It’s nowhere as raw as the first-gen car, but this would help make it appeal to a wider group of audience. After all, not all MX-5 owners are driving experts.

The MX-5 is a tiny sports car measuring 3.9 metres in length, and you must see the real thing to realise how small it is. Nevertheless the new model is larger inside, and tall/large occupants have nothing to complain about except for the pedal positioning. There’s not much space in the trunk either – we couldn’t fit golf bags in there.

In the manual version, there isn’t enough space to put all three pedals in a linear fashion, and the driver finds them positioned towards to right side. This means the clutch is located where the brake pedal used to be and the accelerator is further right next to the front right wheel. The seats are positioned close to the ground, and getting in and out may require a small push for elders like me. Steering wheel position is better, since the telescoping reach adjustment has been added.

It takes a little time to get used to the driving position in the MX-5, but once you’re through, it’s time to rock and roll.

The six-speed manual gearbox is a little tough at low speeds and you need to shift rather slowly. But accelerate and keep the revs up high, and shifting becomes much slicker and quicker.

The gear ratio is super direct (1:1 in sixth gear) and the throttle is super lively. Whenever you apply pressure to the gas pedal the car responds without hesitation.

The only setback for me was the engine sound, which was pretty much boring like the standard Mazda3. A roadster like the MX-5, in my opinion, deserves a much sportier and livelier note that this. They should even have retarded combustion for engine backfires during gear changes like European sports cars - I think that’ll be fun.

Meanwhile, what is still strong, though, is the driving performance.

The weight distribution, steering precision and chassis of the MX-5 teams up to produce an addictive driving character. The car feels light and agile, giving the driver loads of confidence. The steering provides a direct feel, and the 205/45 sports tyres on 17-inch black metallic wheels offer plenty of grip without much relaying much harshness from the road.

Take it to the track and the MX-5 can deliver thrills too. It is not difficult to get the rear wheels sliding, but more impressive is how easily the driver can catch the oversteer and get the car back into a straight line.

The suspension also takes up shock and vibration better than older models, offering a higher level of ride comfort. At cruising speeds, you can hardly hear the engine running – the hardtop also contributes to a quitter cabin.

Apart from the usual packaging, there are also a few new safety features such as Smart City Brake Support (automatic braking from 4-80km/h) and Driver Attention Alert.

The Mazda MX-5 RF, priced at Bt2.89 million, has a few competitors in its price range, such as the Subaru BRZ and Toyota 86 (and even the Audi TT that’s priced not far above), but there’s always that strange aura with the Mazda that makes a strong following.