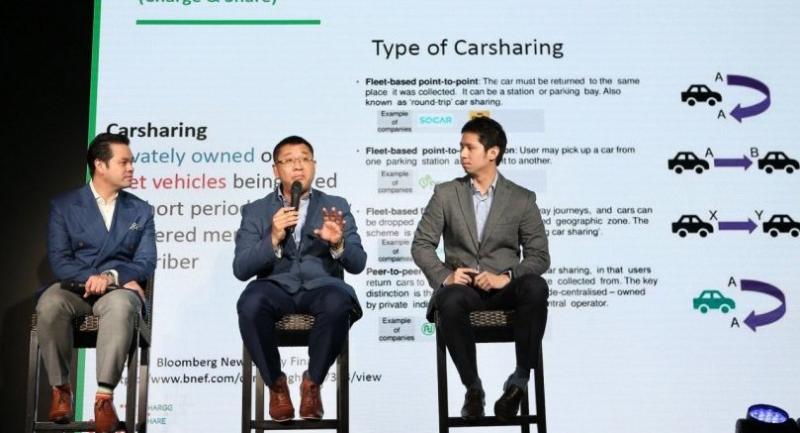 With the European HQ rapidly moving to serve an electric auto world, the local unit joins partners on charging station and battery plans

BMW plans to be significantly involved in electric vehicle (EV) technology in Thailand in the coming years.

The German automaker recently organised “The Future of Mobility” forum, which saw company executives and industry experts give their perspectives on the era of electromobility.

BMW Group Thailand president Christian Wiedmann underlined the interest last year when he said the company enjoyed as much as 20 per cent growth, with PHEV (plug-in hybrid electric vehicle) model sales jumping by 122 per cent.

“Further PHEV models will be launched to the Thai market in due course,” he said. “As we ceaselessly drive our international standing as a pioneer in the field of sustainability, we have continued to support Thailand’s charging infrastructure with the launch of ChargeNow in 2017.”

“BMW Group Manufacturing Thailand has also set its sights on another milestone in Thailand’s journey towards a future of electromobility with local high-voltage battery assembly – which comprises assembly of the battery modules and the battery packs – from 2019 onwards,” he said. “BMW Group Manufacturing Thailand, together with DRAXLMAIER Group, have invested over Bt400 million to establish this new beacon for e-mobility innovations in Thailand and the region.”

A new production facility, in partnership with DRAXLMAIER Group – one of the world’s leading automotive suppliers and a strong systems partner with BMW Group since 1966 – will commence its full operation in this year. Finished batteries will be transported to BMW Group Manufacturing Thailand for the production of the PHEVs in the first phase from 2019.

The model is based on the BMW 5 Series and BMW 7 Series.

BMW has already been granted approval for government-backed incentives from the government’s Board of Investment (BoI) to cover a further investment of over Bt700 million to assure assembly of more BMW PHEV models in the future.

Dr Andreas Aumann, vice president of Product Management BMW i and E-Mobility for BMW Group, said BMW Group on a global scale sold more than 140,000 electrified (battery-electric and plug-in hybrid) vehicles in 2018. In total, 142,617 electrified BMW and MINI vehicles, up 38.4 per cent, were delivered to customers around the world last year.

“Electromobility is an essential pillar of the BMW Group’s Number ONE>NEXT corporate strategy and one of the company’s four key future-focused ACES topics (autonomous, connected, electrified and services/shared),” Aumann said.

“By 2025, that number is set to grow to at least 12 models. Including plug-in hybrids, the BMW Group’s electrified product portfolio will then comprise at least 25 models.”

From 2021, the BMW Group will be capable of manufacturing models with all-electric (BEV), plug-in hybrid (PHEV) and conventional (ICE) drivetrains on a single production line. Aumann said the ability to integrate e-mobility in the production network enables the group to respond even more flexibly to the increasing demand for electrified vehicles. By the end of 2019, the group expects to have more than half a million electrified vehicles on the roads.

“In future, we will be able to swiftly decide which models we are going to equip with what mix of all-electric drive, plug-in hybrid drive or exceptionally efficient combustion engines. This will let us partially or fully electrify each model in accordance with market demand, creating the basis for the mass-market introduction of pure battery electric vehicles in the future,” Aumann said.

Meanwhile, BMW Group Thailand has been collaborating with the public sector and business partners to support EV-related development efforts and to provide charging station services in Thailand. In 2016, it signed a memorandum of understanding (MoU) with King Mongkut’s University of Technology Thonburi (KMUTT) to study the prospects of electric vehicles and car sharing programmes in Thailand under the “Electric Vehicle Charging and Car Sharing Zones” or “Charge & Share” initiative.

Yossapong Laoonual, president of the Electric Vehicle Association of Thailand, said: “Charge & Share is an initiative led by the Automotive Research Cluster Working Group at KMUTT. Our goal is to support EV deployment in the university, encourage commuting via car sharing, and conduct research on public transit behaviour in Thailand.

“This is a great starting point and we are pleased to be able to partner with BMW Group Thailand on the Charge & Share initiative,” said Yossapong, who chairs the working group at KMUTT. “Under this initiative, KMUTT has set up charging stations to offer car-sharing services at the university.

“We strongly believe that this project will significantly drive Thailand towards a sustainable future.”

The BMW PHEV vehicle enables KMUTT to record drivers’ behaviour as well as public behaviour in car-sharing and EV car-sharing systems – all of which contribute to the Charge & Share project as well as the analysis of future EV utilisation in Thailand. Additionally, Haupcar – Thailand’s first car sharing service and application – is working with the university to facilitate the vehicle reservation, return, and general service management systems.

Haupcar has a fleet of 200 vehicles for rent, most of which are subcompact, compact and sedan models. The startup has signed up over 60,000 users, most based in Bangkok, and aims to expand service locations for the electric car-sharing service. With the BMW i3 now involved in the pilot phase, the company aims to increase the use of electric vehicles over the coming years.

To further support the infrastructure for EV car sharing, encourage the growth of electric vehicles in Thailand, and contribute to the Energy Policy and Planning Office’s (EPPO) goal of having 1.2 million EVs and PHEVs on Thai streets by 2036, BMW Group Thailand and its ChargeNow partners have been expanding the ChargeNow public charging station network across Thailand following its official launch in August 2017.

There are now 121 ChargeNow and other charging outlets at BMW authorised dealers ready for service in 57 locations nationwide, with the aim of reaching 150 chargers by year’s end.