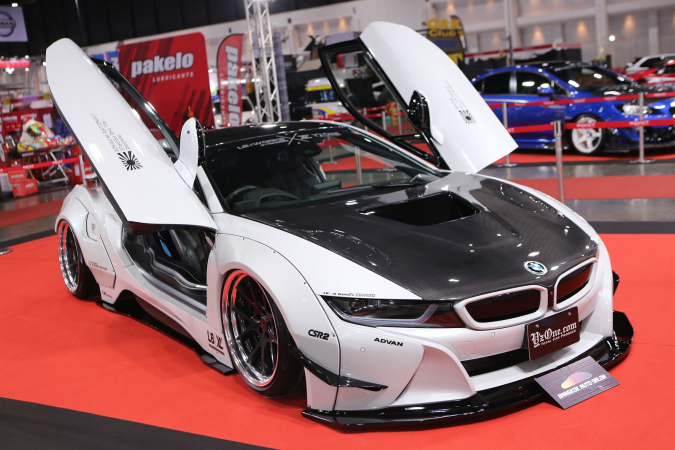 Dresses-up BMW i8 Liberty Walk from Japan is the star of this year's show.

The annual Bangkok International Auto Salon (BIAS), which opened on Wednesday at Challenger Hall 3 Impact Muang Thong Thani and runs until Sunday, promises an entertaining day out for car lovers.

Custom car enthusiasts are expected to drool over highlights from Japan as well as other countries in the region, while those eyeing new cars also enjoy attractive sales promotions from a good number of automakers taking part in the five-day event.

The BIAS is the largest custom-car event in Southeast Asia, based on the world-famous Tokyo Auto Salon held in January every year, show organiser Wiluck Lohthong said.

A large number of accessory-makers are present with products coming from Japan, Hong Kong, Malaysia, Taiwan and Thailand, as well as Australia and the US which are participating for the first time, Wiluck said.

Auto companies such as Honda, Isuzu, Mazda, Nissan, Suzuki and Toyota have set up booths, featuring product lineups as well as special custom models that can be purchased.

Those who place orders for new vehicles at the show will be in the running to win a Mazda2 Auto Salon Edition, round trip to Japan, as well as gift vouchers, totalling over Bt2 million.

Dealer MGC-ASIA is participating with BMW and MINI models, along with Summit Honda Automobile and MMS Bosch Car Service. Others include Mercedes-Benz Metro Autohaus and Subaru. Motorcycle brands include Yamaha, BMW Motorrad, and Yourbike, offering a good collection of pre-owned superbikes.

Apart from cars, other daily highlights include race queens from Japan and Thailand, sexy carwash show, ninja show from Japan as well as various car club meetings with over 1,000 cars in total.

In addition, there is an “E Sport Showcase Zone” as well as a Food Truck zone featuring international cuisine, Japanese included.