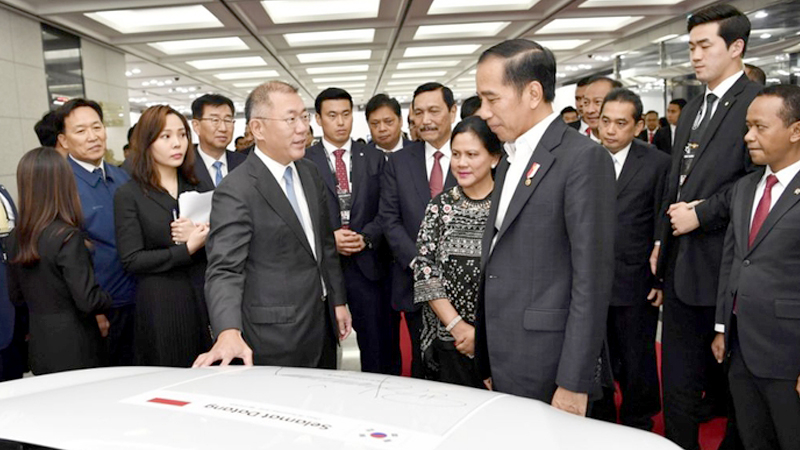 President of Indonesia Joko Widodo (center right) and Executive Vice Chairman of Hyundai Motor Group Chung Euisun (center left) chat in front of Kona Electric after leaving a signature on the car, prior to the investment clinch ceremony which took place at the automaker’s plant in Ulsan, Tuesday. (Hyundai Motor Group)

By By Kim Da-sol
The Korea Herald

Hyundai Motor Group on Tuesday clinched a $1.5 billion investment deal with the Indonesian government to construct an automotive plant in Delta Mas in Bekasi, Indonesia, which will be the automaker’s first finished car production facility in the Southeast Asian region.

“Establishing Hyundai Motor’s local factory in Indonesia is an achievement based on the Indonesia government’s active cooperation and support,” said Executive Vice Chairman Chung during the ceremony.

He added that the automaker will continue to contribute to the growth of the ASEAN region and meet the Indonesian government’s eco-friendly car policy.

The investment comes three years after the automaker launched a business unit in charge of entry to the Southeast Asian market in 2017.

Located 40 kilometers from the Indonesian capital, Hyundai Motor’s finished car factory will be built over 776,000 square meters by 2021.

The automaker said the manufactured vehicles at its Indonesian plant will be exported to other Southeast Asian countries including the Philippines, Thailand and Vietnam, while exports to Australia and Middle East are also under review.

Separate from finished cars, exports of auto parts for complete knock down, to be assembled at the final destination, are also among the plans, the automaker said.

The latest deal hints at the automaker’s official entry to Southeast Asia’s largest market for vehicles, also aiming to make use of export benefits in the country, such as in-state tax exemptions.

In major Southeast Asian countries including Indonesia, Thailand, Malaysia, the Philippines, Vietnam and Singapore, up to 4.49 million vehicles are expected to be on roads by 2026, from the current 3.17 million units as of 2017.

Strategically targeting Indonesia, the automaker said it plans to newly develop small-sized sport utility vehicles and compact multipurpose vehicles, while the production for electric vehicles is one of the possible scenarios.

For stable operation at the new Indonesia factory, Hyundai Motor said it will conduct a differentiated strategy and system from product development and production to sales, by focusing on customer-centered strategy.

The automaker said it will adopt a built-to-order system, offering customers more options and reducing the company’s stock management cost.

Amid the rapidly growing e-commerce environment for consumers, the automaker said it will also introduce an omnichannel retail platform for purchasing a car by collaborating with industry-leading e-commerce companies.

Hyundai Motor also plans to secure some 100 nationwide dealership networks by the end of 2021, considering customer accessibility and demand per regions.

The automaker said it will also push for collaboration between auto parts makers in South Korea and Indonesia to bolster Indonesian auto parts companies’ technology development.