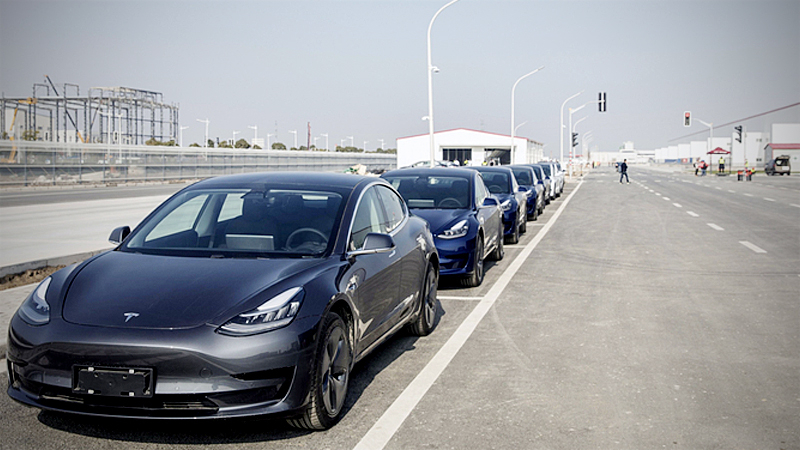 Tesla shares opened at new highs after the electric-car maker reported a new record for quarterly deliveries of 112,000 units in the final three months of 2019.

The electric-vehicle maker handed over 92,550 Model 3 and 19,450 Model S and Model X electric vehicles in the fourth quarter, according to a statement, eclipsing its previous total best of 97,000 set in the prior three months. Tesla delivered 367,500 vehicles total in all of 2019, topping the low end of its forecast for at least 360,000.

The results add to the momentum Chief Executive Officer Elon Musk ended last year with following a surprise quarterly profit reported in late October. To stay on a roll, Tesla will have to overcome the ceasing of federal tax credits for its vehicles in the U.S. and less-generous support from the Netherlands, which generated huge demand with tax incentives that expired at year-end.

Tesla delivered about 7,000 more cars than it produced in the quarter, meaning the automaker managed to reduce inventory. The Palo Alto, California-based company hasn't scheduled a date yet for the release of fourth-quarter earnings.

The outlook for government incentives to support burgeoning electric-vehicle demand is positive in parts of the world, including Germany, where Musk has announced Tesla will build its next factory. And while policymakers in China have mulled further reducing subsidies, a new plant Tesla has built near Shanghai is making Model 3s assembled there eligible for handouts, and locally built sedans will be exempt from a purchase tax.

International deliveries of the Model 3 sedan began in early 2019 and became a significant source of sales over the course of the year. While Tesla doesn't release a breakdown of deliveries by region or country, the company disclosed in October that revenue in the U.S. plummeted by almost 40% in the third quarter from the year-earlier period. That drop more than offset growth in other geographies.

In the Netherlands, 12,062 Model 3s were registered in December alone, according to Kentekenradar, which publishes daily Dutch fleet data updates. That's more than double the car's previous best month in September.

U.S. buyers were still eligible for $1,875 federal tax credits for the last six months of 2019. While that perk went to zero as of Jan. 1, some state incentives are still available.

Tesla went to great lengths to help some customers take delivery of their car in time to get the tax credit, paying one journalist who lives in Florida to fly to St. Louis so he could pick up his car before the end of the year.

Customers flocked to Tesla's factory and delivery hub in Fremont, California, on New Year's Eve to take delivery of their cars, with many staying past midnight to complete paperwork.

Tesla has said that China could become the biggest market for Model 3s, which are now being assembled at the factory near Shanghai. Prospects for growth in the market helped buoy the stock leading up to the company handing over the first locally made sedans to 15 of its own employees on Dec. 30.

The plant has assembled just short of 1,000 cars for sale to customers and demonstrated an ability to make more than 3,000 a week, excluding local battery-pack production that began late last month, according to the company.

Heading into Tesla's report, analysts were divided over where the carmaker's deliveries are headed next. Canaccord Genuity raised its price target by more than $100 on Thursday to $515, telling clients that the shift in demand toward electric vehicles will only accelerate this year. JMP Securities wrote that Wall Street's expectations for this year were "oddly low."

Others aren't so sure. Cowen & Co. recently expressed caution about "demand saturation" across most mature markets. Analyst Jeffrey Osborne predicted fourth-quarter Model 3 deliveries would drop both sequentially and from the year-earlier period when excluding the Netherlands and China.

The average price target for Tesla shares is $301.83, according to data compiled by Bloomberg. Eleven analysts recommend buying the shares, compared with 10 holds and 15 sells.

As Tesla gets production ramped up in China, one key question will be whether the company can generate enough demand there to offset what is seasonally the slowest time of year for all automakers in the first months of each year.

Musk, 48, followed up two straight record quarters of deliveries at the end of 2018 with a disappointing first three months of deliveries last year, sending shares on a slide that took much of 2019 to come back from.

"Many investors remain snake bitten by this stock," Dan Ives, an analyst at Wedbush Securities who rates Tesla the equivalent of a hold, wrote in a report Thursday. "Every time optimism grows and it looks like bright skies over Fremont, unfortunately some negative variable has come out of left field and created an overhang on the story."