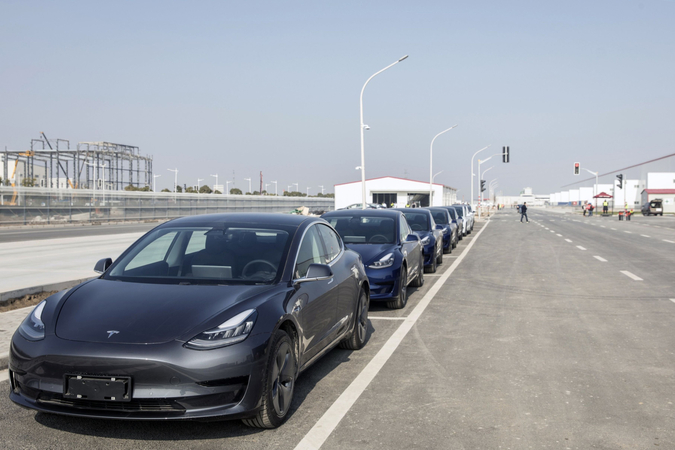 WASHINGTON - The federal auto safety regulator said Friday that it has begun a review of complaints that Tesla cars have suddenly accelerated, crashing into a palm tree in one instance, and walls, a fire hydrant, and parked cars in others.

A photo included in the agency's complaint records shows a Tesla Model S that smashed through a wall in a person's home after they tried to park in their garage.

The National Highway Traffic Safety Administration has received 127 similar complaints about sudden acceleration resulting in 52 injuries. Their inquiry into the incidents could involve as many as half a million vehicles, according to the agency's summary of the review.

A witness to a 10-vehicle crash on a Oregon highway in August told police that it appeared a speeding Tesla Model 3 that careened through traffic "was not controllable and that it seemed like she was watching a movie."

NHTSA said it launched the review after receiving what's known as a defect petition, a type of complaint that members of the public can use to compel the agency to act. The review involves Model S and 3 sedans and Model X SUVs in model years 2012 through 2019.

"As is the agency's standard practice in such matters, NHTSA will carefully review the petition and relevant data," the agency said in a statement.

Tesla, which makes electric vehicles only, did not respond to a request for comment.

The review is the second that NHTSA has launched involving Tesla in recent months: In November, it said it would review complaints about battery defects.

Automakers have faced complaints about their vehicles suddenly accelerating before, but it has proved difficult to determine whether a defective design or the driver was at fault. Jason Levine, the director of the Center for Auto Safety, said the amount of data Tesla collects on its vehicles could lead to greater clarity, and he hoped NHTSA would force them to turn over the information.

A McLean, Virginia, woman's husband filed a complaint with the agency after her Model 3 crashed in her parking garage at work last April. The woman said she was trying to roll forward into a parking space when, "I felt like someone had taken control from me."

The car smashed into a pole and was totaled, said the woman, who asked that her name not be used to protect her privacy. Her husband said Tesla investigated and told them the accelerator was pushed all the way down, a conclusion they reject.

The woman's experience was typical, according to a review of the Tesla complaints in NHTSA's records. People reported vehicles approaching parking spaces or garage doors - or otherwise traveling at a low speed - when they violently lurched forward despite an apparent lack of accelerator input from the driver.

In some of the complaints, people reported that Tesla refused to turn over computer reports on the force of the pedal or the incident logs from the episodes and blamed driver error.

Details of the Oregon crash were submitted to NHTSA by police, who told the federal agency that witness accounts "appear to verify" the driver and passenger's account that the car experienced unintended acceleration.

The complainants themselves insisted they hadn't depressed the accelerator pedal. One couple, a 42-year-old pilot and 37-year-old physician, said they both experienced instances of sudden unintended acceleration in the span of about two weeks.

Several of the drivers suspected Tesla's advanced driver-assistance suite, Autopilot, was a potential culprit. In one instance, a driver in Olympia, Washington, said they were attempting to park their Tesla Model S at a Costco when "the car bolted."

"It felt like it was in Autopilot mode without me engaging it manually," the complaint said. "I can still drive the car and feel fairly safe as I believe the computer accidentally engaged the Autopilot and now the Autopilot isn't operational. However, I no longer trust this car."