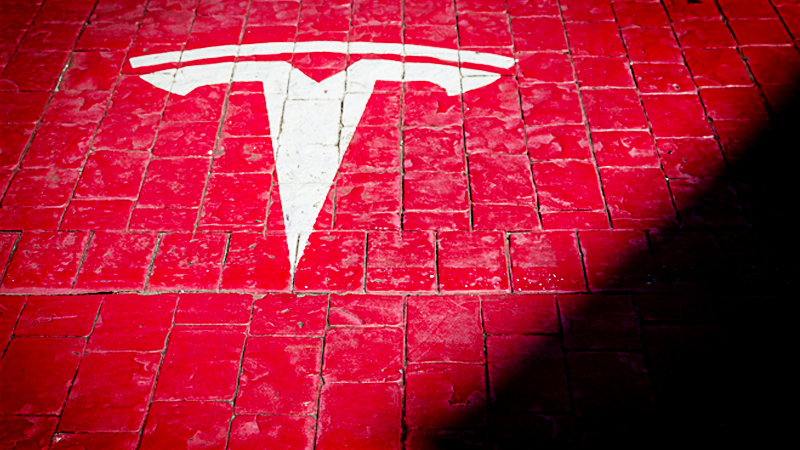 A Tesla logo marks a parking bay at a supercharger station in Girona, Spain, on July 10, 2019. MUST CREDIT: Bloomberg photo by Angel Garcia.

Another boost came from Argus analyst Bill Selesky, who raised his price target on Tesla to a Street-high of $808 from $556, reflecting revenue growth from the legacy Model S and Model X cars, as well as strong demand for the new Model 3, which accounted for more than 80% of fourth-quarter production.

"Despite past production delays, parts shortages, labor cost overruns, and other difficulties, we expect Tesla to benefit from its dominant position in the electric vehicle industry and to improve performance in 2020 and beyond," the analyst wrote in a note to clients. Selesky reiterated a buy rating.

Also, over the weekend, ardent Tesla bull Catherine Wood of ARK Investment Management said in an interview with Bloomberg that the stock is still "incredibly undervalued." According to ARK's latest note, published on Jan. 31, its 2024 expected value per share for Tesla is $7,000.

After kicking off 2019 on unsure footing, with doubts about demand and profitability swirling and weighing on the shares, Tesla's stock bounced back in the second half of the year and has taken off over the past few months, as the company posted profits for both the third and fourth quarters, deliveries impressed investors and a China factory came online faster than expected.

Tesla shares have now risen 83% in just 2020 alone, and have tripled in value since third-quarter results were reported in mid-October.