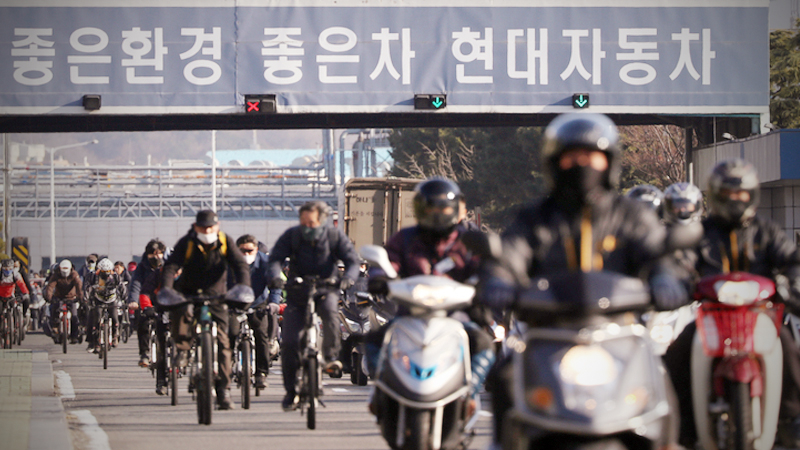 Hyundai Motor workers leave the office at the main gate of the factory located in Ulsan on Tuesday afternoon, as the automaker decides to suspend all production lines at local plants in phases due to the disruption of parts supplies from China. (Yonhap)

The nation’s largest automaker Hyundai Motor confirmed Tuesday it will suspend all production lines at local plants in phases due to the disruption of parts supplies from China.

The decision follows three-hour talks between the labor union and management, and the suspension is expected to last until around Monday.

The production shutdown is due mainly to the inventory shortage of wiring harnesses, which are mostly produced in China. Handmade wiring harnesses need to be laid on the floor of vehicles during their initial assembly. Because every car model uses a different wiring harness, inventories are not usually accumulated due to difficulties in management, industry watchers said.

A day earlier, Hyundai Motor President Ha Eon-tae said that closing (factories) is “inevitable” due to the “disruption of parts supplies” from China.

One of the two production lines making Genesis vehicles at the Ulsan plant was suspended earlier in the day. The line producing Porter was also suspended in the afternoon.

By Friday, production at all five plants in Ulsan will cease operations, while plants in Jeonju and Asan will also take time off on Thursday and Friday.

The management and labor union have agreed to a 70 percent wage payment for workers during the suspension period.

SsangYong Motor will also shut down its Pyeongtaek plant from Tuesday for nine days, while Renault Samsung Motors and GM Korea are checking their inventory levels and are considering canceling or delaying overtime.

The prolonged outbreak of China’s coronavirus is also posing a threat to Korean tech firms as many of their key factories are located in the country.

LG Display’s plant in Nanjing ceased operations over the weekend. LG Chem also shut down its battery plant in Nanjing, polarizer plants in Beijing and Guangzhou, and the automotive materials plant in Tianjin. SK Innovation too has suspended production lines in its Changzhou battery assembly plant.

“Stocks were secured for the Lunar New Year holiday, but supply will be tight if it turns into a prolonged outbreak,” SK Innovation said.

The nation’s two largest chipmakers, Samsung Electronics and SK hynix, are operating their factories with minimum personnel during the Lunar New Year holiday -- which has been extended until Feb. 9 in China. Samsung’s plant is located in Xian, about 700 kilometers from Wuhan, the epicenter of the new coronavirus outbreak. SK hynix has production lines in Wuxi and Chongqing, about 600 to 800 kilometers away from the city.

Samsung said its factories are currently fully functional. Noting, “We will look closely at the situation and are considering various options.”

An SK hynix official said during an earnings conference call on Friday that the company is preparing a contingency plan because it cannot “rule out the possibility of the operations being affected” if the situation is prolonged.

“The industries with long tails in the supply chain, such as automobiles and information technology, will suffer first. But, other manufacturing sectors may also gradually see disruption in their supply chains because almost everything is produced in China,” said Chung In-kyo, a professor at Inha University.