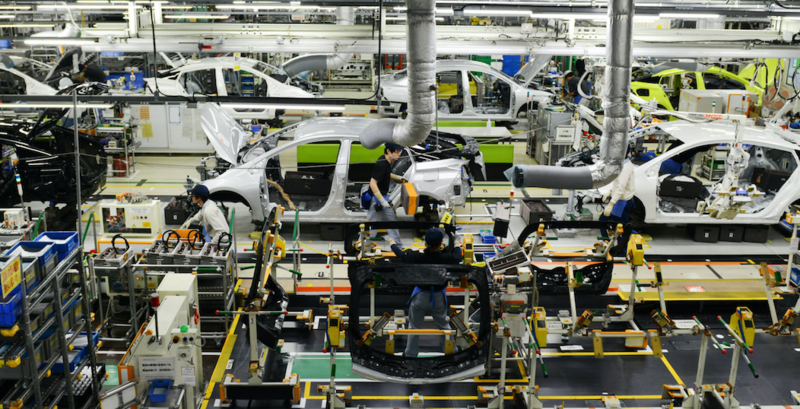 The Prius hybrid and Priyus hybrid plug-in production line of the Toyota plant in Toyota City, Japan, on Dec. 8, 2017. MUST CREDIT: Bloomberg photo by Noriko Hayashi.

Toyota isn't letting a global slowdown get in the way of its plans to grow, reporting a higher-than-expected quarterly profit on Thursday and raising its full-year forecast.

Even as a production shutdown in China, the world's largest car market, has cast a pall over global automakers already struggling to cope with a downshift in demand and rising costs on next-generation technology, Toyota is betting it can sell more cars.

"The global market in 2020 will be probably lower than what was the market in 2019, but you saw our forecast in terms of sales volume for 2020 and we plan to sell more cars than in 2019 -- even if the market is declining," Didier Leroy, a Toyota executive vice president, said at a press conference in Tokyo.

Toyota is targeting operating profit of 2.5 trillion yen ($22.7 billion) for the full fiscal year through March, up from a previous projection for 2.4 trillion yen and broadly in line with analysts' expectations.

That contrasts with U.S. rivals General Motors Co. and Ford Motor Co., both of which lost money in the last quarter of 2019. GM expects earnings to be flat this calendar year while Ford forecast a larger-than-expected drop in profits.

Shares of Toyota rose 2.6% in Tokyo, the biggest jump since July. The stock is just shy of its four-year high.

Toyota's bullish outlook reflects less severe yen appreciation than it had feared, higher profit margins in North America and Europe, and relentless cost cutting -- much of which has been borne by the company's tight network of suppliers.

"It's a very severe situation for our suppliers," Masayoshi Shirayanagi, Toyota's operating officer in charge of purchasing, told reporters in Tokyo. He said the automaker is working to strengthen those ties by taking suggestions for loosening tight specifications and easing exacting standards where possible.

"Last year, we met with the heads of companies in our supplier associations in a group discussion and they expressed some unhappiness with Toyota," Shirayanagi said.

Operating income in the fiscal third quarter, which ended in December, was 654 billion yen, topping the average analyst forecast of 643.8 billion yen. Revenue came to 7.54 trillion yen, compared with the consensus estimate for 7.42 trillion yen.

Despite softening sales volumes in Japan, North America and China, Toyota benefited from steady growth in Europe, where hybrid gas-electric vehicles accounted for 52% of its sales last year. Profit margin in the region climbed in the latest quarter to 4.6% from 3.2% a year ago.

"Hybrid vehicles are chosen by more than half of our customers and this has boosted our overall sales in Europe," Leroy said.

That has given a boost to the company's mainstream Toyota brand -- sales of which last year exceeded 1 million vehicles for the first time since 2008 -- and helped its Lexus luxury brand post a double-digit sales growth.

In North America, operating profit rose to 105.9 billion yen, nearly four times the 26.4 billion in the year-earlier period. That came despite a 2% slide in sales volume to 668,000.

Company officials attributed that profit surge to a number of factors, including a shift in production toward more light trucks such as sport utility vehicles and pickups. The company has been reworking its manufacturing footprint in the U.S. to crank out more SUVs such as its best-selling RAV4 and popular mid-size Highlander and cope with slow sales of sedans like its Camry model.

"The U.S. Highlander is fresh while RAV4 is very strong," said Tatsuo Yoshida, senior auto analyst at Bloomberg Intelligence. "Full-year guidance was revised up, but fourth-quarter assumptions are conservative and it is likely Toyota eventually beats its guidance."

One wild card is the impact from the production shutdown in China due to the spread of a deadly virus. Toyota said late last month it would extend a planned work stoppage at its Chinese factories until at least Feb. 9.

Japan's largest automaker said its profit forecast doesn't take the shutdown into account and that it is still assessing the likely impact on its earnings and global supply chain from a protracted work stoppage.

"The impact of this new additional problem is really unclear at this stage," Toyota's Leroy said.

Toyota said sales in its home market were hit hard by an October sales tax hike, with income and sales declining in the latest quarter. But Japan is still its most lucrative market, where it earned more than 400 billion yen in profit and boasted margins topping 10%.