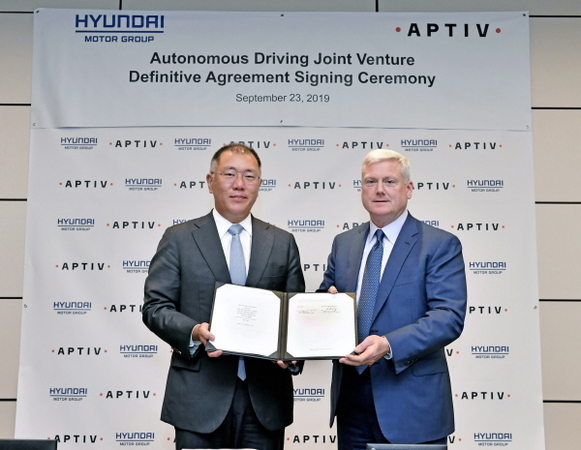 By Kim Da-sol
The Korea Herald

Hyundai Motor Group said Friday that it has completed the establishment of a 50:50 joint venture with the US software developer of autonomous vehicles Aptiv.

The headquarters of the joint venture will be set up in Boston, Massachusetts, and it will run research centers in both the US and Asia, the company said, adding that the company mission will be announced in the near future.

In September last year, Hyundai Motor Group clinched a deal with Aptiv, formerly known as Delphi, for a $4 billion joint venture to develop autonomous technology. The two firms agreed to test-operate autonomous driving vehicles in 2022 and start mass-producing them from 2024.

The Korean automaker said in a statement it expects to consolidate Hyundai’s position as “a pathfinder in the field of autonomous technology,” breaking from its previous position as a fast follower.

The company said that the group’s three subsidiaries -- Hyundai Motor, Kia Motors and Hyundai Mobis -- will inject a combined $1.6 billion in cash and $400 million worth of engineering services, research and development capability and intellectual property rights.