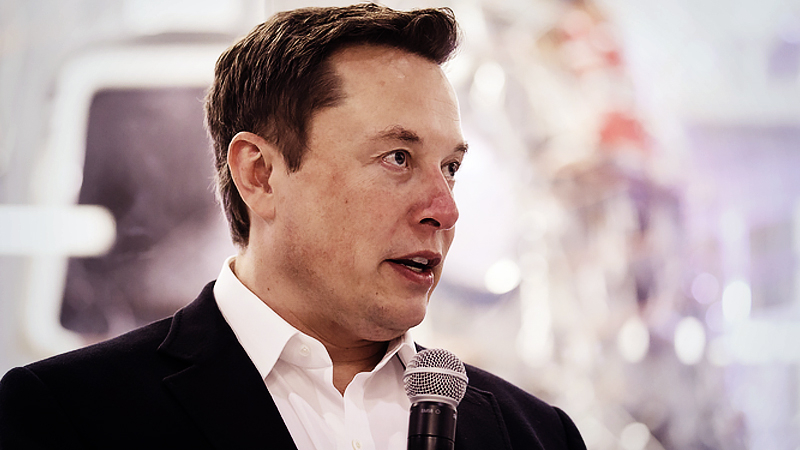 "To say that they cannot leave their house and they will be arrested if they do, this is fascist," he said, before the call abruptly cut out. "This is not democratic-this is not freedom."

The company was forced to shut down its Fremont, California, factory just as it was ramping up production for its Model Y, the crossover vehicle it expects to be its best-selling product.

The comments followed Tesla posting a slight profit Wednesday, a lukewarm signal as worries mounted about the electric carmaker's trajectory amid the global pandemic.

The company said first-quarter profit came in at $16 million, down compared with the past two consecutive quarters. In the same quarter a year ago, the company reported a $702 million loss. The company's nearly $6 billion in quarterly revenue was up 32 percent year over year.

The company in early April already reported a record first quarter for production and deliveries of its vehicles lineup, consisting of the Models S, X, 3 and Y. Still, analysts have cautioned that the pandemic is likely to slice into production an render unlikely its target of half a million vehicles built in 2020.

Tesla echoed that concern, saying it might not hit that target due to the coronavirus. It also warned cash flow and net income might be difficult to predict, so it would revisit its yearly guidance next quarter.

"It is difficult to predict how quickly vehicle manufacturing and its global supply chain will return to prior levels," Tesla said. "We have the capacity installed to exceed 500,000 vehicle deliveries this year, despite announced production interruptions. For our U.S. factories, it remains uncertain how quickly we and our suppliers will be able to ramp production after resuming operations."

"In Fremont we're working toward restarting production as soon as that's possible," he said. "However, unavoidably, the extended shutdown in Fremont will have an impact on our [near-term] financial performance."

In response to a question about what the company had learned from the crisis, Musk said Tesla had started spending more efficiently.

"It has caused us to look closely at our cost structure and to be more efficient as a company," he said. "We came to the conclusion that the right move is actually to continue to expand rapidly, continue to invest in the future in new technologies, even though it is risky."

Still, Tesla's stock rose more than 7 percent in after hours trading to $861.07 as investors applauded the profit.

The record first-quarter performance surprised investors and analysts, who expected the company to have suffered some preliminary impacts from the global impacts of the coronavirus, which ravaged China before the first cases of local transmission were reported in the U.S. toward the end of February.

Analyst Dan Ives of Wedbush Securities said that Tesla's ability to turn a profit in an environment constrained by covid-19 sent the market a strong signal of the company's financial viability that sent the stock surging.

"The fact that they're navigating that storm as well as they are, now you're gonna have a stock that's going to start to make it's trek toward a thousand dollars," he said.

Tesla began delivering its Model Y crossover in March, in a muted debut that coincided with widespread social distancing and shelter-in-place orders aimed at slowing the spread of the virus. Wednesday's earnings report was the first indicator of demand for the small SUV, which has long been expected to be strong due to U.S. preference for that type of vehicle. Tesla said the crossover became the "first time in our history that a new product has been profitable in its first quarter."

The Y's debut may have provided some insight into why Musk initially resisted efforts to close businesses in the Bay Area, where Tesla is headquartered. Only after substantial intervention from local authorities last month did Musk agree to close up shop at its Fremont, California, factory.

Tuesday night, ahead of the earnings release, Musk repeatedly encouraged business to reopen, at one point tweeting "FREE AMERICA NOW." The tweet drew the ire of some elected officials who said Musk's antics showed he was willing put the health of Americans at risk for personal gain.

Tesla rounded out 2019 with two straight quarters of profits after meeting the low end of its vehicle delivery targets on its mass-market Model 3, though it posted an annual loss.

"By all accounts, 2020 was supposed to be Tesla's year," Jessica Caldwell, executive director of insights with research group Edmunds, said in a statement. "Its Shanghai factory was up and running, Model Y production and deliveries were ahead of schedule, and the company was making money while expanding its product lineup and operations. COVID-19 essentially robbed what would've been a home run for Elon Musk, so it's unsurprising that he's been leaning into the 'Free America' rhetoric on Twitter."

While some "die hards" will stick with the brand, Tesla faces problems including cheaper gas and a recession likely to cut into pocketbooks, said Karl Brauer, an auto industry analyst who serves as executive publisher at Cox Automotive. Luxury brands, which count Tesla among their ranks, tend to suffer during recessions.

"We looked like we were on the cusp of electric vehicles moving from niche to something more than niche," Brauer said. "Nobody with a grounded perspective thinks that was has happened in the last two months is good for electric vehicles."