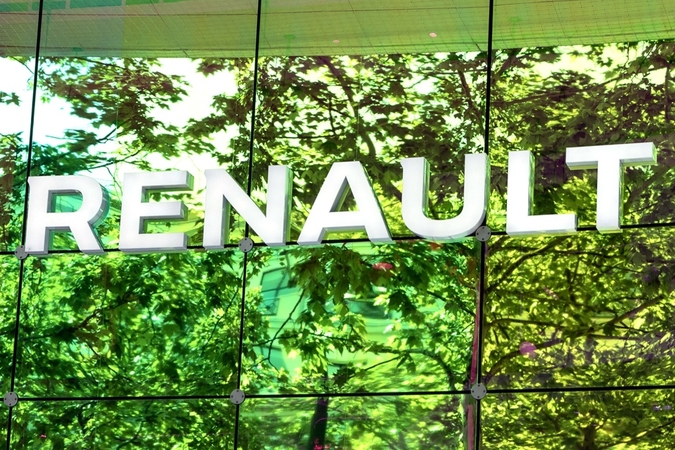 Trees are reflected on the glass facade of the Renault SA flagship showroom on the Champs Elysee in Paris, France, on Wednesday, May 27, 2020. MUST CREDIT: Bloomberg photo by Adrienne Surprenant

Renault and Japanese partners Nissan and Mitsubishi unveiled a plan for deeper cooperation in developing and building vehicles as they seek to salvage their strained alliance and weather a collapse in car demand.

The measures will help deliver savings of as much as 40% in model investments for jointly developed vehicles, the companies said Wednesday. Nissan will take the lead on autonomous driving, Renault on the body of electric cars and some electric powertrains while Mitsubishi Motors will work on plug-in hybrids, they said.

Renault, Nissan and Mitsubishi Motors need each other more than ever after the global coronavirus pandemic forced automakers to shutter showrooms and factories. The industry is also facing a once-in-a-generation shift to electric vehicles and autonomous driving that will require significant investment. After coming under pressure last year, the partnership is seeking a fresh start, backed by new measures at the companies to improve profitability.

"The new model focuses on efficiency and competitiveness, rather than on volumes," Jean-Dominique Senard, chairman of the alliance operating board and Renault, said at a news conference.

That marks a change from an emphasis on growth during the era of Carlos Ghosn, who built the alliance and led it for almost two decades before his arrest in late 2018. In the past, the partnership focused "too much on expansion," said Osamu Masuko, chairman of Mitsubishi.

Any plans for a merger between Renault and Nissan are also off the table, according to Senard. "We are moving forward within the current framework," he said. Ghosn had pressed to make the alliance irreversible.

"Renault has provided relief that its Nissan and Mitsubishi alliance will deepen as global scale remains crucial amid the near-term challenge of a global auto-demand slump and the high costs associated with the transition to EVs," said Michael Dean, Bloomberg Intelligence's senior auto industry analyst, in a note.

Nissan will lead efforts in China, North America and Japan, while Renault will focus on Europe, Russia, South America and North Africa. Mitsubishi will continue its efforts in Southeast Asia, where it already has a strong footprint.

In designating the so-called leaders and followers for projects, the partners are tackling one of the most prickly issues they have faced during the past decades: infighting and power struggles between French and Japanese engineering teams. The goal is to have close to half of the car models in the alliance produced under the new operating model by 2025, they said.

One example Senard provided is Brazil, where the companies use four manufacturing platforms to produce six models. Under the plan, this will be distilled down to one platform for seven models.

In Europe, Renault will lead on commercial vehicles, smaller SUVs and compacts while Nissan will oversee bigger SUVs and take the global lead in this area in five years.

"All members of the alliance will have access to all the key technologies," Senard said. He and other top managers of the three car companies outlined the plan during an online press conference. They mostly avoided giving details about any specific plant closures, plans that could be revealed in coming days by Renault and Nissan separately.

The alliance came under intense strain following Ghosn's departure as the circumstances around his sudden arrest fueled mutual suspicion and management turmoil. Some analysts question whether the efforts to right the partnership are too little too late.

"After 21 years, what have they been up to?" said Koji Endo, an analyst at SBI Securities in Tokyo. "Saying that it will be better in 2022 through 2024 is not convincing."

Renault is preparing to unveil on Friday a cost-cutting plan worth 2 billion euros ($2.2 billion) over three years that is expected to include site closures in France and staff reductions. The carmaker has been caught in a political maelstrom this week due to union opposition to shutting factories and talks with the government, its most powerful shareholder, on a 5 billion-euro state-backed loan.

The company is considering shutting an engine and transmission factory in Choisy-le-Roi, France, and mulling the future of four other production sites, Franck Daout, spokesman for the CFDT union, said by phone Tuesday following meetings with Senard and Finance Minister Bruno Le Maire. These include Flins, iron foundry Fonderie de Bretagne, a factory in Dieppe and its Maubeuge site.

Le Maire on Tuesday said Flins shouldn't be closed and any plans for Maubeuge need to be closely examined, while acknowledging the company's manufacturing capacity is twice production levels.

Clotilde Delbos, the interim chief executive officer, said it's "too early" to give details on the future manufacturing footprint in Europe, dodging the question ahead of the announcement of Renault's cost-cutting program.

Nissan is due to announce its own restructuring plan on Thursday that will cut costs by 300 billion yen ($2.8 billion) and phase out the Datsun brand, a person with knowledge of the matter has said.

Nissan has struggled since Ghosn's arrest with an aging car lineup and management paralysis denting its outlook. The automaker warned last month it expects to post a loss for the latest fiscal year through March. The Yokohama-based company also plans to shut down one production line in addition to the recently closed operation in Indonesia and reach the reduced spending target this year by cutting marketing, research and other costs, the person said.

Although Nissan is forecasting a 12% decline in sales to 10.2 trillion yen for the just-ended fiscal year, the new mid-term plan calls for a return to revenue of 11.5 trillion yen within three years, with fixed costs kept at reduced levels, the person said.