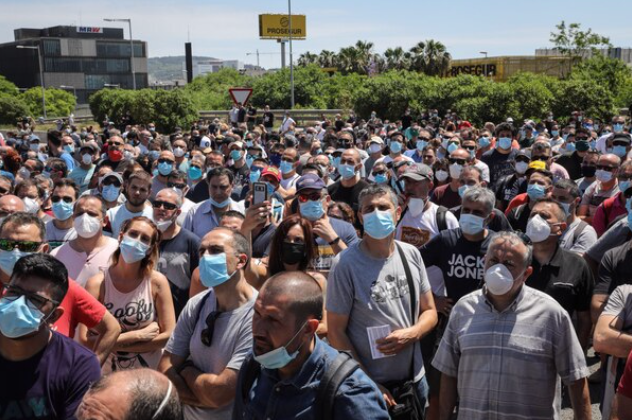 Demonstrators block the Ronda del Litoral highway following a protest outside the Nissan plant in Barcelona, Spain, on May 28, 2020. MUST CREDIT: Bloomberg photo by Angel Garcia.

Nissan reported a 671 billion yen ($6.2 billion) net loss for the latest fiscal year and unveiled a plan to turn the carmaker around by eliminating about 300 billion yen in annual fixed costs, cutting capacity and reducing the number of vehicle models.

The result, the first loss in a decade and the biggest in 20 years, includes restructuring and impairment charges of 603 billion yen for the year that ended in March, the Yokohama-based company said Thursday. The four-year plan calls for production to be cut by 20% to about 5.4 million vehicles a year, and includes the closing of Nissan's Barcelona plant in addition to one it is shuttering in Indonesia.

The reorganization is part of a broader push by Nissan and alliance partners Renault and Mitsubishi Motors to focus on costs and profitability to weather a collapse in car demand due to the coronavirus pandemic. Nissan has been in turmoil since the November 2018 arrest of former Chairman Carlos Ghosn, who had pushed for volume growth. This all comes as the industry is being disrupted by the shift to electric vehicles and autonomous driving.

"The numbers might leave a negative impression, but they are taking drastic steps and that's worth noting," said Naoki Fujiwara, chief fund manager at Shinkin Asset Management Co. "In the post-corona era, you won't be able to survive unless you improve your efficiency."

Sales for the fiscal year through March fell 15% to 9.9 trillion yen. Nissan didn't issue an earnings outlook for the current period, citing uncertainty over the business because of the pandemic.

Shares of Nissan have slumped 29% this year, out-pacing the declines by Toyota Motor Corp. and Honda Motor Co. Underscoring the challenges facing Nissan, the automaker said output fell 62% in April as the pandemic continued to pummel the industry.

"I will do everything I can to return Nissan to a growth path," Chief Executive Officer Makoto Uchida said at a news conference, adding that he other senior managers are taking voluntary pay cuts.

The automaker will cut the number of models to less than 55 from the current 69, with a plan to introduce 12 new vehicles in the next 18 months. The most anticipated new model is the Rogue sport-utility vehicle for the U.S.

As part of the three-way alliance, Nissan is focusing on its main markets of the U.S., Japan and China. Among the three regions, China is a bright spot as its economy sputters back to life after shutting down in the early days of the outbreak. Nissan's sales volume in China rose 1.1% to 122,846 vehicles in April, helping it claw back some market share.

Nissan said it has "sufficient liquidity to steer through this challenging business environment," with cash and cash equivalents of 1.5 trillion yen and access to about 1.3 trillion yen in credit.

Koji Endo, an analyst at SBI Securities Co. in Tokyo, said the coming year is a critical period, predicting that the company's losses "will surge this year."

"Nissan will likely have tremendous losses before its plan will have an effect," Endo said. "It needs to think about how it's going to get it through."

Nissan's loss will have a negative impact of 3.57 billion euros ($3.9 billion) for Renault, the French carmaker said in a statement. Alliance partner Renault is Nissan's biggest shareholder, with a 43% stake.

Nissan, Renault and Mitsubishi Motors now need each other more than ever. On Wednesday, they announced an effort to work more closely, aiming to save as much as 40% in jointly developing vehicles. Nissan will take the lead on autonomous driving, Renault on the body of electric cars and some electric powertrains while Mitsubishi Motors will work on plug-in hybrids, they said.