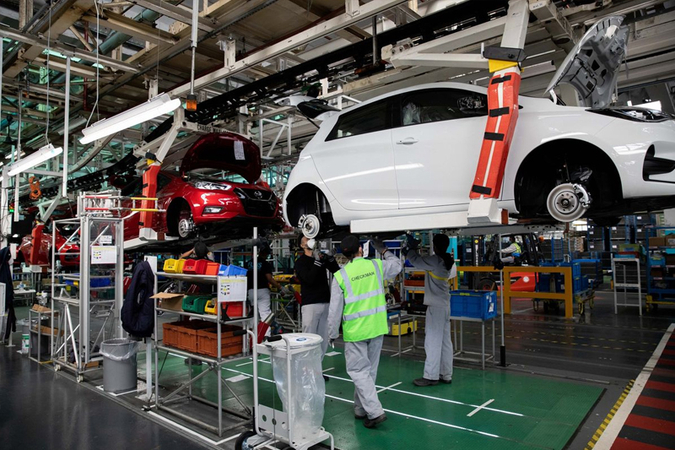 Renault plans to eliminate about 14,600 jobs worldwide and lower production capacity by almost a fifth in a move to dramatically reduce costs and outlast the downturn that has rocked the global auto industry.

The plan includes the politically delicate task of trimming 4,600 positions in France, or about 10% of the carmaker's total in its home country, through voluntary retirement and retraining, according to a statement Friday. More than 10,000 further jobs will be scrapped in the rest of the world, pruning a global workforce of about 180,000 people.

The measures round off a decisive week for Renault and its Japanese partners Nissan Motor Co. and Mitsubishi Motors Corp., drawing a line under a two-decade era of aggressive expansion under the alliance's former leader, Carlos Ghosn, who was arrested in late 2018. A slump in consumer demand and factory shutdowns to slow the Covid-19 pandemic have forced their hand, with shrinking head counts and production cuts now a priority.

"We have spent and invested too much and will now come back to our base," Renault Acting Chief Executive Officer Clotilde Delbos said on a call with analysts. "We're facing reality, not looking to be on top of the world."

The company will turn its focus to profitability and away from the race for volumes at any cost, she said, citing a successful revamp at crosstown rival PSA Group, which makes Peugeot and Citroen brands. Renault's poor 2019 results provided a necessary wake up call that shocked employees into changing their mind-set and working more closely with Japanese partners, she added. Under Ghosn, Renault had a sales target of 5 million sales annually by 2022, which has since been abandoned.

To achieve savings of more than 2 billion euros ($2.2 billion) over three years, Renault's plan will cost about 1.2 billion euros to implement. While it "may not be enough" it can be put in place quickly, Delbos said.

The carmaker flagged possible adjustments to capacity in Russia, but held off on decisions about the future of six sites in France amid political furor and union opposition. Instead, talks will begin on various scenarios including phasing out car assembly at the Flins plant, which builds the Zoe model, and Dieppe, where the Alpine A110 sports car is assembled.

The European car industry is feeling particular hurt from the pandemic crisis, with the continent struggling with overcapacity before the virus hit. Fiat is asking for a $6.9 billion state-backed loan to save its Italian operations and Volkswagen AG is facing pressure from labor groups worried about job cuts. In Spain, Nissan is contending with angry workers protesting a plan to close a plant in Barcelona, underscoring the challenges of downsizing the industry.

Renault has been at the center of a political maelstrom in recent weeks over its plans to downsize in France while at the same time seeking a state-backed loan of 5 billion euros to bolster reserves.

French Finance Minister Bruno Le Maire warned Thursday he wouldn't sign the check until he had examined the company's strategy "site by site, job by job," with closures being "a last resort." At the same time, he said Renault's manufacturing capacity is roughly three times what's needed this year. Delbos said the credit facility has been agreed and would be available within days.

Highlights from the plan:

- Generating savings from the engineering division of about 800 million euros

The government is Renault's most powerful shareholder and has representation on its board. In exchange for the auto-industry stimulus package, the state has called for manufacturers to commit to keeping production and research in France. Renault and PSA have pledged to increase local production of electrified vehicles and components.

"If we do nothing, Renault is in danger," Le Maire has said. While pledging to stand by the company, he has urged the automaker not to close the Flins factory and give careful consideration to the situation at Maubeuge and Douai.

Renault said Friday it will consult unions on plans to transfer Choisy-le-Roi activities to Flins, where recycling could be developed. The company pledged to study a reconversion of Dieppe, the future of Caudan (Fonderie de Bretagne) and examine Maubeuge and Douai.

To qualify for the government's support, Renault scrapped its dividend. It burned through 5.5 billion euros in the first quarter, bringing its liquidity down to 10.3 billion euros at the end of March. Renault's incoming CEO, Luca de Meo, is scheduled to take the helm in July and Delbos said he would likely present a new strategy around year-end.

While she dismissed talk of any major overhaul in the lineup, those decisions would be made by him, she said.