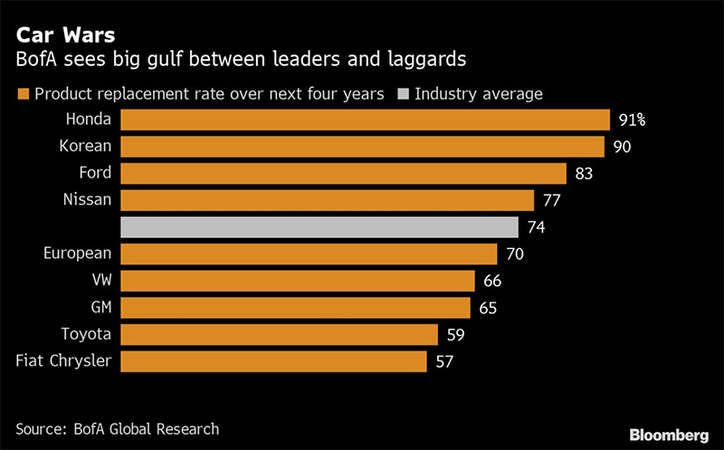 General Motors's ambitious push into electric vehicles could pose a near-term risk as the automaker spends less to replace its more profitable gas-powered vehicles, according to an annual study published by Bank of America Global Research.

GM's $20 billion investment in electric models and self-driving technology over the next five years makes it one of the most aggressive carmakers when it comes to rolling out plug-in models, along with Germany's Volkswagen. But the Detroit-based company plans to refresh only about 65% of its current sales volume with revamped vehicles, which is third-to-last among major manufacturers. VW is just ahead of GM at 66%.

Fewer updates for popular gasoline-powered models may hurt market share, underscoring the quandary the industry faces as companies try to fund an electric-focused future. The billions spent on plug-in vehicles that typically lose money -- and that no one besides Tesla has sold in large numbers -- takes investment dollars away from their bread-and-butter gas burners at a time when the global pandemic has hurt sales.

"The very active shift GM is making shows the confidence that they have to move where the market is going," said BofA analyst John Murphy on a conference call. "It may result in lost market share."

Over the next four years, Toyota and Fiat Chrysler will refresh less than 60% of their current sales volume. That turnover ratio belies the cadence of product updates, which in Toyota's case reflects a lull after a spurt of new models in the past few years, Murphy said. Honda Motor Co. topped the list with plans to refresh 91% of current models and Korean brands Hyundai Motor Co. and Kia Motors Corp. are set to revamp 90%. Ford Motor Co. was third at 83%.

GM will move 30% of its vehicles to electric-motor and battery power, up from just one U.S. model today: the Chevrolet Bolt. It plans to launch two more next year, the Cadillac Lyriq crossover SUV and a Hummer pickup truck. Both vehicles likely will sell for more than $50,000, which is what it takes to make money on electric models, Murphy said. But the bigger price tag means lower sales volume.

Making it tougher are the Covid-19 shutdowns, which will reduce sales in North America by 25% this year to 15.2 million vehicles and trigger a 20% drop globally to 71.4 million, the report said. Deliveries should recover next year to almost 80 million.

Murphy said GM's strategy could be a game changer, giving the company a leadership position as consumers shift to electric vehicles. That's GM's goal, said company spokesman Jim Cain, who contests the notion it will cost GM market share. "We are very confident in our plan," he said.

One change that could help GM bridge the gap in its transition to EVs is its recent launch of several new crossover SUVs and its all-new Chevy Silverado and GMC Sierra pickups. Later this year, the new Chevy Tahoe and GM Yukon large SUVs come to market. All of those have gasoline engines -- and fat profit margins.

"They can ride the profit from those vehicles," Murphy said.