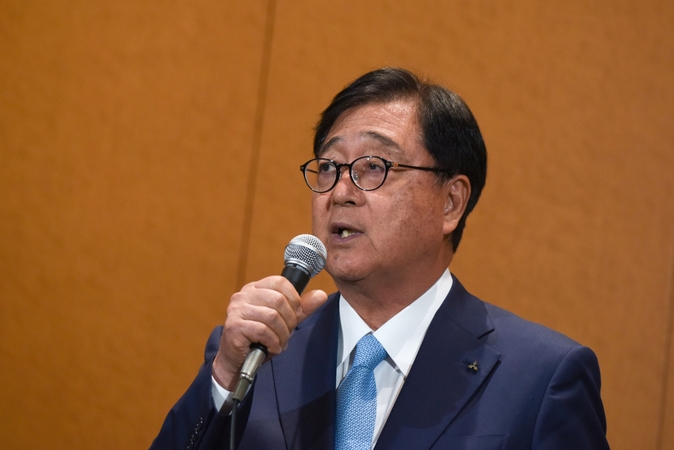 Osamu Masuko, who stepped down Friday as chairman of Mitsubishi Motors Corp., speaks during a news conference in Yokohama, Japan, on Jan. 30, 2020. MUST CREDIT: Bloomberg photo by Noriko Hayashi. Location: Yokohama, Japan

Mitsubishi Motors Corp. Chairman Osamu Masuko is stepping down after 15 years due to health reasons, just as the Japanese automaker's alliance with Nissan and Renault is being shaken by deteriorating profits.

Chief Executive Officer Takao Kato will temporarily assume the role of chairman from Friday, Mitsubishi Motors said in a statement. Masuko will remain as a special adviser to the company, which didn't elaborate on his condition.

Masuko was the last top-level leader remaining from when Carlos Ghosn, the former chairman of the three automakers in the alliance, was arrested in November 2018 on charges of underreporting income. Masuko had negotiated with Ghosn to sell a third of the company after its stock had declined following a car-inspection scandal. Although the alliance unveiled a new strategy in May, all three automakers are on track to lose billions this year as they struggle to cope with the coronavirus pandemic. That has raised concerns over the viability of their partnership.

"Under new management, it'll become clearer that Mitsubishi will prioritize its own revival," said Seiji Sugiura, an analyst at Tokyo Tokai Research.

Shares of Mitsubishi were little changed at 225 yen in late afternoon trading in Tokyo. The stock is down by about a half this year.

The global car alliance, which was created to compete against other auto giants, is under increasing strain since Ghosn's arrest. Apart from Ghosn, former Nissan CEO Hiroto Saikawa and former Renault CEO Thierry Bollore left their positions last year. Last week, Mitsubishi Motors forecast an operating loss of 140 billion yen ($1.3 billion) for the fiscal year through March, and said it would close a plant in Japan assembling Pajero SUVs in a bid to cut costs.

Masuko negotiated with Ghosn when Mitsubishi Motors was embroiled in a car-inspection scandal in 2016 for falsifying fuel-economy data. Nissan bought about a third of Mitsubishi. Masuko stepped down as CEO in June 2019, and Kato took on the role.