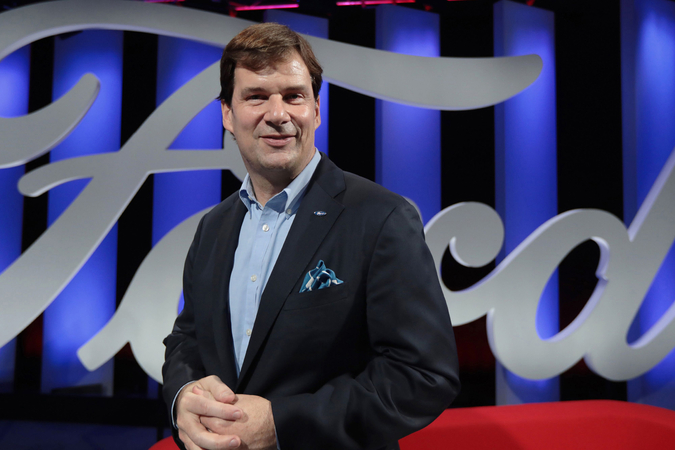 Jim Farley, then president of Ford Motor Co. Europe, during a launch event ahead of the 87th Geneva International Motor Show in Geneva, Switzerland, on March 6, 2017. MUST CREDIT: Bloomberg photo by Luke MacGregor.

Ford's new Chief Executive Officer Jim Farley wasted no time in his first day on the job by setting a tone of urgency and shaking up the automaker's management team.

Farley, who took over as CEO Thursday from Jim Hackett, has said he is looking for fresh thinking to pull Ford out of a slump that it expects will lead to its first annual loss in a decade this year. He named John Lawler, a 30-year company veteran who has headed Ford's autonomous-vehicles unit, as his new chief financial officer, the carmaker said in a statement.

Farley said in the statement that his predecessor had "opened the door" to making Ford a "vibrant, profitably growing company. Now it's time to charge through that door."

Lawler immediately replaces Tim Stone, who served in that role for a little over a year and has accepted the CFO position at software company ASAPP Inc., Ford said.

He said he will allocate capital, resources and talent to Ford's strongest businesses and hottest models. And he aims to put the company on sounder financial footing by targeting an 8% operating margin.

"We're going to compete like a challenger," Farley said.

The new CEO also plans to name new chief information and marketing officers, following the retirement of current CIO Jeff Lemmer on Jan. 1 and removal of CMO Joy Falotico, who will now focus on her other role of heading Ford's luxury Lincoln brand.

Initial reaction from Wall Street was positive, with Credit Suisse analyst Dan Levy, who has a "neutral" rating on the stock, praising Lawler as a "well-regarded Ford veteran" and anticipating more disclosure from Farley on his turnaround plan.

"We believe Farley has challenges balancing near-term fixes with long-term secular" changes, Levy wrote in a research note, "yet brings a sense of urgency."

The leadership changes are accompanied by some shifts in Ford's managerial structure, including the creation of three regional business units to oversee operations in China, Europe, and the U.S. and the rest of the world.