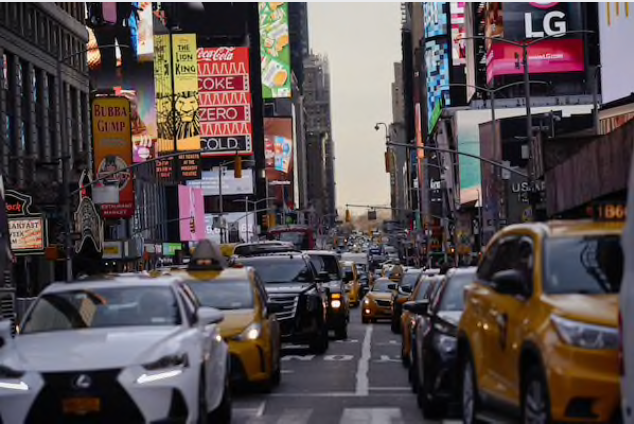 Vehicles sit in traffic during rush hour in the Times Square area of New York on April 2, 2019. MUST CREDIT: Bloomberg photo by John Taggart.

Traffic is a headache, and not just for drivers. Jammed roads have become an increasing economic, health and environmental menace to societies, contributing every year to millions of premature deaths and costing vast sums in lost productivity (an estimated $87 billion in the U.S. alone). To policy makers, that's raised the allure of an option that not only can de-clog the streets and improve the air but also fill the coffers. Might congestion pricing become the norm for cities?

1. What is congestion pricing?

Charging drivers to enter busy areas. It's already used in Singapore, London, Milan and Stockholm, with New York and Los Angeles set to join the movement. Paying to drive into city centers during rush hour or, in London's case from 7 a.m. to 10 p.m., is a turnoff for many commuters that pushes them to seek cheaper alternatives such as mass transit, car pooling or cycling. London charges 15 pounds ($19) a day. The upsides for cities can include quicker bus journeys, more space for pedestrians, fewer road accidents and less pollution.

2. Does it tackle the jams?

Congestion fell 30% and pollution dropped almost a quarter the year after London started charging to enter an area of 8 square miles (21 square kilometers). Stockholm's system, launched four years after London's in 2007, cut traffic to and from a 13-square-mile cordon by 20% and reduced traffic delays by as much as 50%. Congestion pricing appears to discourage some individuals from driving downtown but is less effective on businesses that can afford the charges. Congestion in London has returned to pre-charge levels, partly a result of commercial vehicles fulfilling online shopping orders and a rise in demand for ride-hailing services such as Uber, underlining the need to adapt pricing systems.

3. How does it work technically?

Automatic scanners read the license plates of cars, which themselves have been turned into mobile transponders carrying an array of radio-frequency chips. Vehicles are increasingly connected to satellite constellations tracking locations and collecting data about greenhouse gas emissions. Licensing and registration databases can be linked to individual payment accounts. Systems are being developed that let authorities fine-tune prices based on levels of congestion or air pollution.

4. Where does the money go?

Charges can be used to offset the anticipated loss of billions of dollars in fuel taxes as electric vehicles become more commonplace. London's congestion charge is forecast to raise 154 million pounds ($200 million) in 2020. Charges in Singapore and Stockholm have brought in more than $100 million a year each. Pollution incurs all sorts of costs and any policy that reduces it is going to provide some economic benefits, from reduced sick days to better quality of life. Moreover, a reduction in car traffic facilitates moves among citizens from Barcelona to Seattle to make life friendlier for bicycles and pedestrians in the wake of Covid-19 lockdowns.

Motorist lobbies such as the American Automobile Association and some commuters argue that middle-income earners in outlying areas without access to public transport bear the brunt. Skeptics point out that London still has some of the world's worst traffic and that location-tracking exposes consumers to privacy and data risks. Critics also note that it's an inequitable solution, since the price is the same for everyone regardless of means. Some motorists object to congestion pricing or any road charges on the grounds that driving represents personal freedom.

6. Is there another approach?

There's the Paris model, whereby restrictions keep out the most polluting vehicles, a bar that's steadily raised. The French capital banned cars built to pre-1997 emissions standards in 2016, then three years later extended the ban to those from before 2006. Restrictions on cars built before 2009 will kick in from 2021. The two models are not exclusive (London has started banning heavy polluting vehicles) but they reflect different political cultures, one more tolerant of state-enforced bans and the other more open to control via fees.

7. Who profits from congestion pricing?

8. What's the future of congestion pricing?

Systems analysts at the World Bank observed that humans have since Neolithic times tended to budget about an hour a day for travel. While technologies such as automobiles and airplanes have extended the speed and range of travel, people still like to cap their commutes. That's key for proponents of congestion pricing who want to make it a part of so-called multimodal transport systems that blend rail, road and air travel into seamless networks. And with the U.S. Census Bureau calculating that workers in the world's biggest economy are close to breaking the one-hour threshold, the demand for ways to ease congestion is unlikely to abate.