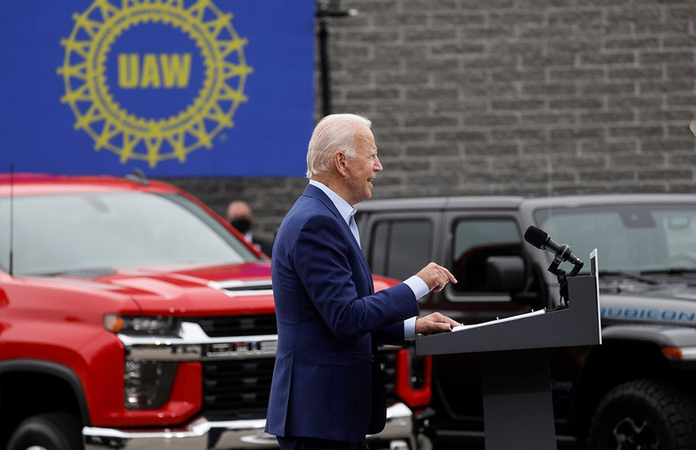 Until a few years ago, the top spot on the lot at Sport Chevrolet in Silver Spring, Md., was occupied by Corvettes. But visit now and the sports cars have been shunted aside. In their place are battery-powered Bolts.

Gibbs Fogarty, one of the dealership's owners, said they saw which way the industry was moving. Their customers were going to want electric vehicles.

"We've been all-in from the start," Fogarty said.

Electric vehicles make up less than 2% of the 17 million or so new cars and SUVs sold each year in the United States, but President-elect Joe Biden, the son of a car salesman and himself the owner of a vintage Corvette, also wants the country to be all-in on electric vehicles. He has pitched them as a way to fight climate change and reinvigorate American manufacturing.

"I believe that we can own the 21st century market again by moving to electric vehicles," Biden says while gripping the wheel of his 1967 Corvette Sting Ray. In a campaign video that used the rumble of the car's engine as a soundtrack, Biden grins at the prospect of an electric version with a 200 mph top speed.

Biden's campaign set out a raft of policies designed to speed the adoption of electric vehicles - including funding for a network of half a million charging points, tax credits for people who buy them, and money to fund research and development. He has staffed his Department of Transportation transition team with advocates for the new technology.

The incoming administration's plans for electric vehicles underscore how its approach to transportation policy will be shaped by the battle against climate change, as it seeks to reshape the sector of the economy responsible for the largest share of greenhouse gas emissions.

Biden also has pledged to dramatically increase the federal government's support for transit, another way of reducing emissions, but that effort probably will play out over a longer time frame and face stiff opposition from Republicans. Plus, in a country where the vast majority of people drive to work, getting them behind the wheel of an electric car is asking for a smaller change than convincing them to take a bus.

The president-elect got a significant boost this week, when General Motors announced it was ditching an alliance with President Donald Trump that was forged last year to challenge California's efforts to impose more stringent fuel standards on automakers. Instead, the company announced in a letter to environmental groups that it supported Biden's electric vision.

Biden said he raised his ideas in a call with industry leaders, including Barra, last week. And on Twitter, Ron Klain, who will be Biden's chief of staff, welcomed her announcement.

"Glad to see @JoeBiden's leadership - bringing business and labor together a week ago today - is already encouraging progress," he wrote.

Significant hurdles remain to making a shift to electric on a large scale. About 242,000 fully electric vehicles were sold in the United States last year, according to data compiled by the Argonne National Laboratory. Of those, 189,000 were Teslas.

The owners of Sport Chevrolet say they're among the top sellers of electric vehicles on the East Coast, but even so, saleswoman Esmerelda Ponce estimated they sell one Bolt for every five gas-powered cars and SUVs sold.

Advocates for the technology say they are excited about the prospects of a boost from the new administration, but it is tempered by the size of the challenge and realities of politics.

"We shouldn't be deluded in believing that just because we have a president who might be more excited about EVs or who has demonstrated more interest that this is going to be an easy path," Ben Prochazka, national director of the Electrification Coalition, said in a recent briefing.

Biden's campaign and transition team committed to the installation of 500,000 electric vehicle charging stations by 2030 and extending a tax credit for the purchase of the vehicles. Advocates see the second move as an important bridge for coming years until the cost of electric vehicles falls to the same levels as gas-powered vehicles.

The full buyer credit of up to $7,500 begins to phase out after a manufacturer sells 200,000 vehicles, and has run out entirely for Tesla and GM. At Sport Chevrolet, a new Bolt in the premier trim costs about $28,000 after discounts from the dealership and manufacturer are taken into account, far more than a similar small gas-powered car.

Fogarty said the credit could make the difference: "Customers look at that and it may give them the boost they needed to make that decision," he said.

Biden's team also has pledged to undo Trump's rollback of fuel emissions standards, one of the administration's signature and most controversial environmental policies. The rollback prompted the bitter battle between the federal government and California, with each side lining up an alliance of automakers in support of its position.

Biden has said he would set stricter rules to encourage the adoption of electric vehicles, while he also could end the Trump administration's challenge to California's authority to set its own standards.

He is also looking to California for personnel. Biden is said to be considering Mary Nichols, the head of California's clean air regulator, to lead the Environmental Protection Agency, which shares responsibility with the National Highway Traffic Safety Administration for setting emissions standards. Patty Monahan, a state energy commissioner with responsibility for clean transportation, is a member of Biden's Department of Transportation transition team.

But the president-elect has stopped short of spelling out a goal for when sales of new gas vehicles would be phased out, a step California and some European nations have taken, generally targeting 2030 or 2035.

"That's going to be based upon whether or not we can make it economically feasible," Biden said during a CNN town hall in September, adding, "We have to take the combustion engine vehicles off the road as rapidly as we can."

Designing policies to encourage automakers to build electric vehicles and the public to buy them is only the first step. Most states and the federal government fund a significant proportion of their highway budgets through taxes on gasoline - revenue that would dwindle as more cars are powered by batteries.

Ultimately, a wholesale shift to electric vehicles will represent a disruption to a huge segment of the economy, from manufacturing to dealerships - and even gas stations.

Biden has said his electric vehicle policies will help create 1 million new jobs. But in a report last year, the United Auto Workers warned that ongoing prosperity for the employees of car factories can't be taken for granted. Electric vehicles require less labor to put together, and supply chains could shift with more parts being made in low-wage countries, the union said.

"This shift is an opportunity to reinvest in U.S. manufacturing," the union concluded. "But this opportunity will be lost if EVs or their components are imported or made by low-road suppliers who underpay workers."

The Biden campaign has said his administration would use the government's purchase of vehicle fleets and strict Buy American rules - along with grants to help manufacturers retool plants - to encourage the development of domestic production.

Democrats in Congress already have advanced plans to develop electric vehicle infrastructure. A House proposal for the next five years of highway funding would have made$1.4 billion in grants available for chargers and another $8.3 billion for states to pursue emissions-reducing projects that could include vehicle charging.

But Republicans dismissed the bill, which also shifted money toward transit, as an environmental wish list.

A bipartisan bill in the Senate also included money for charging infrastructure, but Sen. John Barrasso, R-Wyo., chairman of the committee that crafted the legislation, expressed only tepid support.

Instead, Republicans have emphasized the need to account for the effect electric vehicles will have on gas tax revenue - probably by developing a system known as vehicle miles traveled - that would charge drivers based on how far they go.

Nevertheless, electric vehicle advocates hope that a message that combines the environmental case with one about boosting American manufacturing, sometimes framed as part of a broader global struggle with China, will be able to secure bipartisan support.

Katherine Stainken, policy director of the advocacy group Plug In America, said electric vehicle companies already are setting up operations in parts of the country led by Republicans.

"Those auto jobs are hugely valuable," she said. "This should not be a partisan issue."