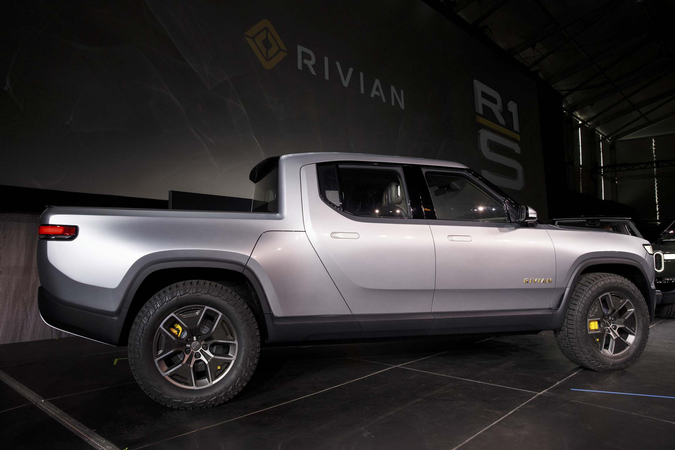 Even the pandemic didn't stop automakers from unveiling cars in 2020. From the achingly beautiful Ferrari Roma to the electric Polestar 2, and from the Mercedes-Maybach GLS to three track-worthy wagons, the new products provided some optimism about the future of driving while many other diversions (concerts, shopping, travel) stalled.

What I'm really looking forward to driving in 2021 is not a car at all. It's a truck: the Rivian R1T.

The company announced it in 2018, long before Tesla's Cybertruck and General Motors's Hummer EV, so it's about time. (Last year, I wrote about wanting to drive the Cybertruck … and I'm still waiting for that test drive.)

With a 754 horsepower and all-wheel drive, the R1T is not the most practical construction-site hauler, though potential buyers will certainly include a few hardworking ranchers, builders, and outdoor types. The truck bed alone is dwarfed by that of the Cybertruck, which is 6½ feet long and 57 inches wide. The R1T's bed is reportedly just 4¼ feet by 50 inches. It will, however, go from zero to 60 mph in the same time as a Porsche 911.

But more than the $75,000 truck's considerable capabilities-it promises up to 400 miles of driving range-I'm also fascinated by the company behind it.

Founded in 2009 and now headquartered in Plymouth, Mich., Rivian Automotive Inc. has garnered wide praise for bringing to market what myriad others (Bollinger, Fisker, Lordstown Motors, Atlis, and Nikola, among others) have yet to produce: an actual, for-sale, road-legal, live-in-living-color electric truck.

If Rivian executives hold true to their promise that the R1T will hit customers' driveways in June, it will beat the Cybertruck (slated for the end of 2021), Ford's electric F-150 (on sale by 2022), and the Hummer to become America's first battery-powered pickup (the full range will premiere in 2023). Whichever company gets its out first, and does it well, will land a huge coup from a branding perspective, as well as immense profits. The electrified truck represents an astoundingly lucrative market: Last year, 2.5 million Americans bought a pickup truck. They're on track to outpace the sales of SUVs, which, when combined with truck sales, constitute 70% of the U.S. market for new vehicles.

"We're seeing customers come out of just about everything," RJ Scaringe, Rivian's founder and chief executive officer, told Bloomberg on Dec. 10. "Of course, [they're] coming out of pickups, but often-more likely-coming out of SUVs, out of other electric vehicles."

The big question is what makes, or will make, Rivian exceptional among its set. Plenty of people do believe it's special: T. Rowe Price, BlackRock, Fidelity, Soros Fund Management, and Cox Automotive, among others, have invested a cumulative total of more than $6 billion into the company. Last year, Ford paid $500 million for access to Rivian's electric "skateboard" truck platform, a few months before Amazon.com Inc.'s Jeff Bezos ordered 100,000 Rivian-made delivery vans.

Last week, former Aston Martin President Laura Schwab announced she had left the legacy British auto brand to become Rivian's vice president for sales and marketing. "It is sooooooo exciting!" is how she put it.

What's more, Rivian has ambitions far beyond an electric pickup (and subsequent SUV, called the R1S). It wants to go global, with lower-priced, smaller models planned for Europe and China. It wants to build 41 service centers across the U.S. by next year. (Company execs say 80% of servicing will be done at an owner's home or workplace via a fleet of customized Ford Transit vans and Rivian's own electrified service fleet.) And it wants to open a nationwide network of fast-charging stations capable of adding 140 miles of range in 20 minutes.

It's wild ambition that will look either delusional or prescient in the future. Only time will tell, which is why I can't wait to see for myself what all the fuss is about. For me, the proof is in the pudding … or the pickup, as the case may be.