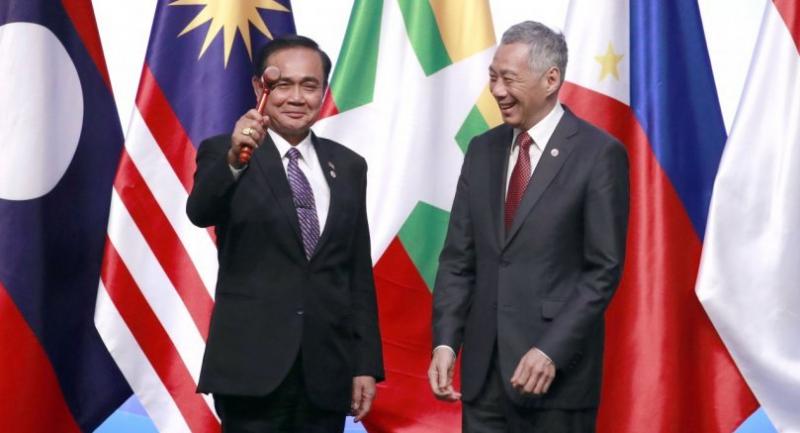 CAN THAILAND handle the upcoming general election and also chair Asean in the same year?

This was a question posed by Asean colleagues last year to Thai officials during a meeting of the 10-member bloc, suggesting a lack of confidence in the Kingdom’s ability to carry out the important tasks.

Diplomats told The Nation that they did not want to see political turmoil in Thailand jeopardise Asean meetings any more, as the regional grouping badly needed to push forward many relevant issues for the group to achieve centrality of regional security architecture and economic integration.

Protests in April 2009 had forced a cancellation of the Asean Summit in Pattaya, after anti-government red-shirts stormed the meeting venue, humiliating the then-government led by the Democrat Party.

Elections and a military coup d’etat since then have failed to achieve reconciliation, heal the divisions in society or restore stability to Thai politics. If the incumbent leaders managed to exploit the coming election to justify the perpetuation of their power, the Asean chairmanship could run into trouble due to domestic political struggle, diplomats said.

The first Asean Summit in Thailand has been set for late June to avoid a power vacuum during the formation of the new government after the election. Usually, Asean hosts two summits a year – the first one is an in-house summit due in March or April and the final one is with dialogue partners, including leaders of superpowers, in November.

“Asean leaders have to wait for the first meeting until the middle of the year, when they should have had the opportunity to hold the meetings early,” former career diplomat Kobsak Chutikul said.

“We would not have faced this situation if the government had held the election in 2018,” he said. “They could have done it [elections] but they didn’t and have led the country to difficulties.” Asean diplomats said they hoped Thailand could set up a new government without problems and a smooth transition would enable the country to steer the progress of Asean. File photo: Thailand's Prime Minister Prayut Chan-o-cha (L) receives the gavel from Singapore's Prime Minister Lee Hsien Loong (R) as a transfer of the ASEAN Chairmanship during the closing ceremony of the 33rd Association of Southeast Asian Nations (ASEAN) Summit and Related meetings in Singapore, 15 November 2018. Singapore is hosting the 33rd ASEAN Summit and Related Meetings under the theme 'Resilient and Innovative' this year. // EPA-EFE PHOTO

With the theme of “Advancing Partnership for Sustainability”, Thailand is unlikely to push any relevant issues if incumbent leaders manage to retain power after the election, Kobsak said. “They are not visionary leaders for foreign affairs.”

There are plenty of tough issues for Thailand to deal with under its leadership in 2019, including the Rakhine crisis in Myanmar, the contentious South China Sea and the Regional Comprehensive Economic Partnership (RCEP).

More than 720,000 refugees have fled Rakhine since August 2017 after militant attacks on Myanmar security outposts prompted a tough reaction from the Tatmadaw (Myanmar military). While Asean has urged Myanmar leaders to address the issue at its root cause by eliminating discrimination against the ethnic group, Thailand has consistently focused its limited involvement on the humanitarian side.

The burden of proximity, close military-to-military relations and economic interests have forced Thailand to refrain from tough engagement with Myanmar over the Rohingya issue, said Kobsak, who is a former member of an advisory board on Rakhine crisis.

Under Thailand’s leadership, Asean wants to push ahead a text for negotiating a code of conduct in the contentious South China Sea. The group intended to finish the text by 2019, but outside observers expressed their concerns that the code of conduct would be too influenced by China.

Beijing is at loggerheads with many Asean members – Malaysia, the Philippines and Vietnam – over a territorial dispute on the South China Sea. The group wants to have a legally binding code of conduct with China to control the behaviour of riparian states while Beijing has increasingly militarised the islands in the sea.

Asean also wanted to see significant progress in negotiations on the RCEP by 2019, but Mahathir said Malaysia would not sign the pact unless it benefited poor people.

Differences between China and India over RCEP would also obstruct its achievement, according to officials close to the negotiations, who added that Thailand’s leadership is crucial.