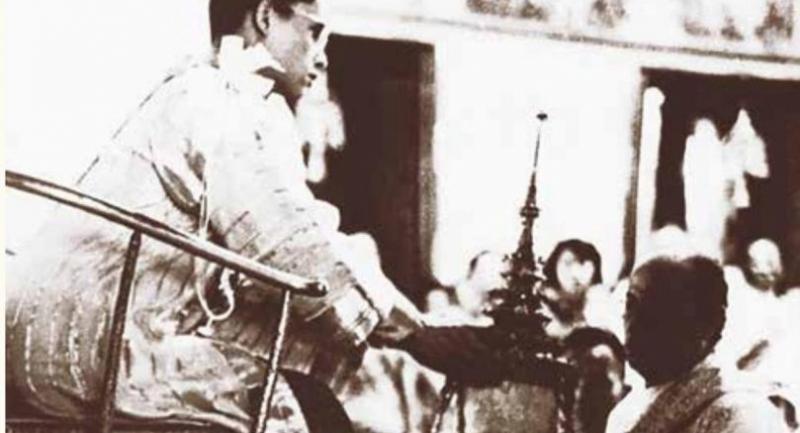 The chief Brahmin offered King Bhumibol Adulyadej (Rama IX) the Great Crown of Victory during his coronation ceremony on May 5, 1950.

ALMOST 70 YEARS have passed since the coronation ceremony of His Majesty the late King Bhumibol Adulyadej (Rama IX) in May, 1950. The ancient traditional practice to formally complete the accession to the throne of the current monarch, His Majesty King Maha Vajiralongkorn (Rama X), will take place this May following more than two years of mourning of the passing of King Bhumibol, in October, 2016.

King Maha Vajiralongkorn took the throne after his father passed away and the National Legislative Assembly acknowledged his accession in November 2016, making him the 10th King of the Chakri Dynasty, meaning that the succession is officially anointed by law, but not by the royal traditional customs that have been practised for hundreds of years. King Bhumibol Adulyadej (Rama IX) at his coronation ceremony in May, 1950

The three-day coronation ceremony from May 4 to 6 requires comprehensive procedures that are intricate, complicated and full of symbolic meanings according to Hinduism and Buddhism. To provide knowledge and understanding of the historic ceremony and the procedures, the Culture Ministry is releasing a set of four books for distribution to libraries and schools nationwide and which are also available through e-book platforms for free download at www.m-culture.go.th. The Culture Ministry releases a set of four books on the history and the details of procedures of the coronation ceremony that can also be downloaded for free.

The last paperback “A Collection of Articles about the Royal Coronation Ceremony” in Thai compiles old articles written by such scholars as Prince Damrong Rajanubhab and Prince Narisara Nuvadtivongse about the regal vestments, the royal regalia and the coronation ceremonies from the reigns of Kings Rama II and V.

“After founding the Chakri Dynasty and the city of Bangkok in 1782, King Rama I re-examined the collective records of the coronation ceremony held during the late Ayutthaya period, resulting in a revised procedure for the ceremony that has become the prototype of the traditional rites for accession ever since,” said deputy prime minister Wissanu Krea-ngam at the book launch held at the Government House on Monday. Eleven coronation ceremonies have been held during the reigns of the nine Kings of the Chakri Dynasty. Kings Rama I, V and VI performed the ceremonies twice, while King Rama VIII unfortunately passed away before being crowned.

The first abbreviated coronation ceremony of King Rama I was held in 1782 shortly after he established the Rattankosin Era. A full-scale affair, took place three years later when the construction of several throne halls and the making of the royal regalia were completed. King Rama V performed the first one at the young age of 15, and again when reaching maturity at the age of 20. King Rama VI was first crowned with simplified rituals, shortly after the passing of his father, King Rama V, and then later in a full-scale event with the participation of foreign royals.

“In the upcoming coronation ceremony, May 4 is the most important day because it’s when His Majesty attends Song Phra Muratha Bhisek (the purification bath) and Abhisek (the royal anointment) as well as being presented with the crown and the royal regalia including the nine-tiered white umbrella (the most important symbol of the supreme sovereign),” Wissanu explained.

“Though in many countries, the act of bestowal of a crown is the heart of the ceremony, the key procedure in Thai traditional practice, which draws on Indian precepts, focuses on the purification bath and the anointment with sacred water,” he added. May 5, 1950: King Bhumibol waited within a pavillion ready to participate in the purification bathing ceremony.

Thai monarchs are highly revered as divine Kings – a tradition influenced by Hinduism. According to the ancient Brahmanism textbook, the sacred water for the purification bath and anointment rites must come from Pancha Maha Natee or five main streams in India, namely the Ganga, Mahi, Yamuna, Aciravati and Sarabhu Rivers. These rivers flow down from Mount Kailash that is considered in Hinduism the physical embodiment of Mount Sumeru – the epicentre of the universe and the abode of Shiva.

“In the late Ayutthaya period, five local principle rivers collectively called Bencha Suttha Khongkha were used to represent the five main streams in India. The five sources were Bang Pakong, Pasak, Chao Phraya, Ratchaburi and Phetchaburi Rivers. During the Ban Phlu Luang dynasty (1688-1767) – the last group of Kings in the Ayutthaya Kingdom, water from four ancient sacred ponds –Sa Ket, Sa Kaeo, Sa Khongkha and Sa Yamuna in Suphan Buri – was added to the ritual because the dynasty’s Kings hailed from Suphan Buri,” added Prof MR Suriyavudh Suksvasti, the art historian and chief of the sub-committee set up to providing information of the coronation ceremony. King Rama VI was first crowned with simplified rituals in 1910, shortly after the passing of his father, King Rama V, and then later in a full-scale event with the participation of foreign royals in 1911.

The five local principle streams and four sacred ponds in Suphan Buri were used in the ceremony until the reign of King Rama V when the five streams in India were included in the ritual.

“King Rama IV, who was ordained for 27 years before acceding to the throne, added the Buddhist religious procedure of chanting and consecrating the holy water to the purification bath in addition to the Hinduism practice. He was also the first monarch to perform the protocol of crowning himself with the Great Crown of Victory – an item of the royal regalia offered by a chief Brahmin in the ceremony. There was no record of previous Kings performing this protocol,” Suriyavudh added during his talk on the coronation ceremony at the Government Public Relations Department last month. The coronation ceremony of King Rama IV in 1851

During the coronation ceremony of King Maha Vajiralongkorn, the sacred water to be used in the purification bath will be collected from five local main streams and four ponds in Suphan Buri. For the anointment rite, the sacred water will come from 107 important sites in 76 provinces and from the Grand Palace.

The water collecting ceremony at each site will start at the same auspicious time on April 6. The water consecration ritual will be done at each province’s principle temple on April 8. King Maha Vajiralongkorn (Rama X) will complete his enthronment according to the venerable traditional practices in a ceremony extending from May 4 to 6.

All the sacred water will later be brought to Wat Suthat Thep Wararam in Bangkok for the water consecration ritual again on April 18, before proceeding to the ordination hall of Wat Phra Sri Rattana Satsadaram, known as the Temple of the Emerald Buddha, the next day in preparation for the ceremony.

“The sacred water from all sites will be sanctified at Wat Suthat because this temple was built by King Rama I in 1809 to symbolise Mouth Sumera after he established Krung Rattanakosin (now Bangkok) whose name represented the heaven of the Indra deity,” Suriyavudh explained. The chief Brahmin offered King Bhumibol the Great Crown of Victory during his coronation ceremony on May 5, 1950.

On the morning of May 4, His Majesty, dressed in white garments, will first participate in the purification bath by sitting on a wooden bench inside a pavilion specially erected next to Chakrapat Biman Royal Residence in the Grand Palace. The sacred water will flow out from a canopied showerhead.

He will change into the regal vestments to attend the royal anointment rite at Atha Disa Udumbara Raja Asana Throne that is intricately carved with fig wood in octagonal shape. The anointment water will be presented to the King in eight cardinal directions of the compass – representing his rule of the Kingdom. The monarch has to turn in the clockwise direction to receive, starting from the east that is considered the primary direction. The chief Brahmin will also present him Nophapadol Maha Saweta Chatra (the nine-tiered white umbrella). His Majesty will then proceed to another throne Bhadrapitha enshrined with the nine-tiered white umbrella for the crowning and investiture ceremony. The chief Brahmin will present him Phra Suphannabat (the royal golden plaque) upon which is inscribed his royal official title, together with the royal seal of state, the royal regalia, the royal utensils, and the weapons of sovereignty. The monarch will crown himself with Phra Maha Phichai Mongkut (the great crown of victory) – the second most important item in the set of royal regalia after the nine-tiered white umbrella – and utter the oath of his accession. The royal procession of King Vajiravudh (Rama VI) to Wat Arun on December 4, 1911

The next procedure is granting an audience to royal family members, privy councillors, cabinet members and high-ranking officials at Amarindra Vinijaya Throne Hall before proceeding to Wat Phra Sri Rattana Satsadaram to declare his willingness to become the royal patron of Buddhism. The paying homage to the royal relics of previous Kings and Queens are performed later.

“Another important ritual is Chalerm Phra Raja Montien (the assumption of the royal residence) for the King to inhabit the palace. A high-ranking royal family member will be in charge of preparing the bed and giving blessing. This ritual signifies His Majesty as the chief of the monarchy. During the ceremony of King Rama IX, he resided there for one night,” added Suriyavudh.

The following day will see the ceremony to bestow the royal name on the newly crowned King, in line with the traditions governing the monarchy. On the same day, certain members of the royal family will be bestowed new titles to reflect their relationship with the monarch.

The final ceremony takes place outside the Grand Palace in the form of a royal procession to Wat Bovoranives, Wat Rajabopidh and Wat Phra Chetuphon to pay respect to the principle Buddha statues and the royal ashes of the previous Kings and Queens.

On the last day of ceremony, May 6, King Maha Vajiralongkorn will hold a grand audience with members of the public and foreign diplomats in the Grand Palace. The royal barge procession to Wat Arun to present kratin – gift of robes presented to monks after the end of the Buddhist Lent – will be held in October.

The preparation schedules of the coronation ceremony are as follows

April 6 and 8: The collecting of sacred water and the water consecration ritual nationwide

April 18: The gathering of sacred water from all designated sites to be consecrated at Wat Suthat in Bangkok

April 19: The procession of sacred water to Wat Phra Sri Rattana Satsadaram in preparation for the purification bath and the anointment rite

April 22 and 23: The inscription ceremony of the royal seal of state, the royal golden plaque and the royal horoscope at Wat Phra Sri Rattana Satsadaram

May 3: The procession of the royal seal of state, the royal golden plaque and the royal horoscope from Wat Phra Sri Rattana Satsadaram to the Grand Palace

May 4: The purification bath and the anointment rite, the crowning and investiture ceremony, the granting an audience to the royal family members and high-ranking officials, and the assumption of the royal residence at the Grand Palace

May 5: The bestowing of the royal name and the new titles of the members of the royal family at the Grand Palace and the royal procession to Wat Bovoranives, Wat Rajabopidh and Wat Phra Chetuphon

May 6: The grand audience with the public and foreign diplomats at the Grand Palace

A set of four books on the coronation ceremony, published by the Culture Ministry, is available for free download at www.m-culture.go.th.