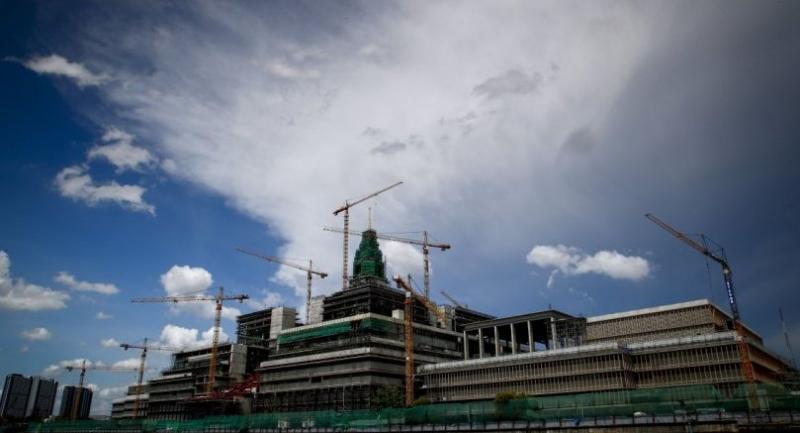 Thailand’s 424,000-square-metre parliament building is currently over budget and behind schedule. Photo/EPA

It will be huge and impressive, but the idea that the new parliament building might make politicians behave better seems a goal too far Thailand is aiming to have one of the world’s largest state administrative centres, almost as big as the gargantuan US Pentagon outside Washington.

But the 424,000-square-metre parliament building under construction at the edge of the Chao Phraya River is over budget at Bt23 billion and years behind schedule, with the current completion date leaning towards the end of 2020.

In the meantime legislators will continue meeting at various large venues around Bangkok as needs dictate.

Once it is finished, however, the edifice known as Sappaya-Sapasathan will indeed be a sight to see.

Designed by a team led by noted architect Theeraphon Niyom, a National Artist, the building embraces elements of Buddhist and Hindu cosmology.

Its name translates as “a place to carry out good deeds” and its centrepiece golden pagoda is intended to strengthen the moral character of the politicians gathered beneath.

That noble if somewhat whimsical ambition has its roots in the political turmoil that’s divided Thai society in recent times. The need for the new building was acknowledged in mid-2008 during the short-lived Samak Sundaravej administration, an incarnation of the Thaksin Shinawatra political machine.

Its conception preceded the 2014 coup by years, but political morality is to this day widely seen in need of shoring up. Theeraphon says the spiritually uplifting aspect of the plan was overt. “We designed the building,” he says, “with four main objectives – to salvage the spirituality of a society now in moral crisis, to represent the Thai identity, to facilitate learning and to improve relations between the state and the people.”

The idea of a “Buddhism-inspired” parliament building proved controversial among both architects and politicians when the National Assembly approved the design a decade ago. And Thai politics has only become more complex since, and perhaps even more divisive, with democracy challenged at every turn.

How then is a structural design to imbue the new parliament with “morality”?

Chatri Prakitnonthakarn, an architect and lecturer on the subject at Silpakorn University, told The Nation Weekend that he regards Parliament as one facet of democracy, but it serves no “moral function”.

“The design should reflect the principles of democracy – equality, rights and freedoms. Instead, the new parliament is being portrayed as religious architecture, which pushes the idea of Thai democracy far behind,” adds Charti, an expert on architecture of the era following the 1932 revolution.

“In politics you need checks and balances as well as good governance to control politicians’ morality.”

Chatri regards the new structure as backwards with its pre-modern design, embodying “the traditionalist revival”, rather than being a masterpiece of 21st-century Thai architecture. The pagoda-like structure at its focus is meant to evoke Mount Phra Sumeru, home of the gods in Hindu cosmology. Generous exterior landscaping will add to the effect, and the public can visit a museum and a park with easy access from the river and the MRT.

Chatri argues, though, that turning Parliament into “a sacred place” will more likely discourage visitors. Within the pagoda structure, the upper house (the Senate) and lower house (the House of Representatives) will deliberate.

A hall for royal functions will occupy the centre of the building and a statue of Phra Siam Thevathiraj, the country’s guardian deity, will sit on top.

Chatri compares the Bangkok design to that of the German Reichstag in Berlin, “one of the world’s best parliament buildings”.

“They kept in mind both environmental concerns and public needs,” he says. “The glass dome on top has solar panels that generate enough electricity for the building with some to spare to sell to the neighbouring community. And tourists can visit and enjoy the views of the city.”

If Thailand’s new parliament is to truly relate to the people and represent democracy, he suggests replacing the “conservative, sacred” pagoda with a more contemporary structure.

“Sacred pagodas belong in temples. The National Assembly should run another design competition with new terms of reference that promote democratic principles – equality, rights and freedoms.

“The building should elevate the power of the people. State architecture on this scale should adopt a modern style because it will become a landmark and historical evidence of Thai democracy.”

Sappaya-Sapasathan will be Thailand’s third seat of government. It replaces the 44-year-old parliament building near the Dusit Zoo, whose site has reverted to the control of the Royal Household Bureau.

The country’s first elected legislature met in the Ananta Samakhom Throne Hall at Dusit Palace in 1933, at the invitation of His Majesty King Prajadhipok (Rama VII).

But the National Assembly soon outgrew the premises. New buildings were thrice planned, but each time the government of the day was unseated before funds could be allocated.