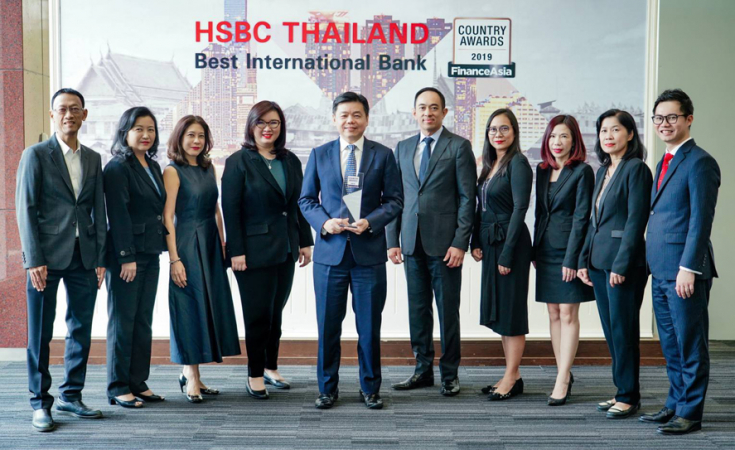 HSBC has been named Best International Bank in Thailand by FinanceAsia as part of their Country Awards 2019, in recognition of the Bank’s performance and outstanding contribution to Thailand’s financial services industry.

According to FinanceAsia, HSBC has made positive strides across most financial metrics in Thailand. It remains a leading go-to bank for trade finance and supply-chain solutions, as well as bond deals. Leveraging its global platform, HSBC has participated in multiple Thai infrastructure projects through providing either guarantees or financing, including the double-track railway upgrades and Laem Chabang Port expansion.

FinanceAsia also highlighted HSBC’s active role in investment banking, citing its role as financial advisor to France’s Engie in the sale of its 69.1% stake in Glow Energy to PTT’s Global Power Synergy, representing Thailand’s second largest M&A deal since 2014. On the buy-side of an M&A trade, HSBC supported EGCO, Thailand’s first independent power producer, on its purchase of a 49% stake in Paju ES in South Korea, representing EGCO’s largest acquisition to date and its first in North Asia.

Commenting on the award win, Matthew Lobner, Head of International and Head of Strategy & Planning, Asia-Pacific, HSBC said: “Our Thailand franchise plays a significant role in connecting customers, trade and capital across HSBC’s international network. As we continue on our path to gain market share and deliver growth from our international network, industry recognition such as this demonstrates that we are on the right course.”

Kelvin Tan, Chief Executive Officer, HSBC Thailand said: “We are proud to win this recognition from FinanceAsia. This illustrates our commitment and dedication to supporting Thailand’s banking sector and fulfilling our corporate clients’ global growth ambitions. With HSBC’s universal banking model and global network, we are uniquely positioned to deliver service excellence and to provide exceptional value to our customers.”