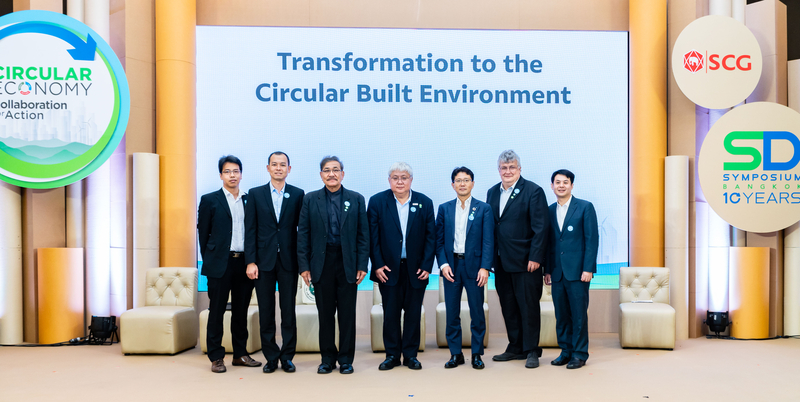 Leading organisations from around the world are exchanging ideas to drive the development of a circular economy for a sustainable world at Bangkok Convention Centre, Central World and the Centara Grand Hotel.

Suttha shared his experiences in achieving a circular economy through MQDC projects. MQDC’s reduction in waste through recycling and its use of renewable environment-friendly materials helped it win a second runner-up prize for sustainability at the AEC Excellence Awards 2017.

“Working under our principle of ‘sustainnovation’ to find innovative solutions for sustainability, MQDC builds and operates to optimise reuse and recycling for a circular economy,” said Suttha.

“While constructing 101 True Digital Park, for example, we upcycled steel items such as furniture for the project. Plastic materials became bags that helped shoppers reduce their waste footprint. We now partner with the project’s many restaurants, collecting leftovers. We compost this food waste over 24 hours to make fertilizer we distribute to local communities.”

Working through the building information modelling (BIM) process, MQDC’s project was the first in Southeast Asia to receive a prestigious AEC award, competing among 145 contestants from 32 countries.

MQDC has pioneered full-cycle use of BIM, enhancing the detail and accuracy of 3D models. This precision helped achieve savings at its project of 30 per cent in energy, 40 per cent in water, and 15,000 tons of CO2 each year, while still enabling an improved quality of life.

MQDC further received a Smart Cities-Clean Energy award from the Ministry of Energy for its project’s use of advanced, environmentally less damaging technology.